I'm still alive—— at least, my mental circuit is not damaged to the extent that I cannot confirm the outside world.

Even so, my field of vision is not clear. My vision quality is extremely low, sand-like particles dance in front of my eyes. Besides that, there are those 'lines' that often appear in old movies. Quite a few white lines appear before me.

The most pressing matter is, my vision is monochrome— no color. This is a dull world with only black and white.

I search for my memories in the blurry consciousness of my mind.

I became scrap metal in the dismantling factory. My arms and legs were removed, while my head and body had been cut off as well.

—Then, where is this?

My auditory setting gradually recovers its function. I can now differentiate the sounds around me.

"Oi, move it over there!" "Stop dawdling!" "Idiot, move quicker!" – angry shouts and noise rings in my surroundings. There's also a heavy banging noise of metal.

I look at my surroundings. However, my monochrome vision that had lost all color is unable to grasp the current situation. In addition, the white rain-like lines almost cover my field of vision. It feels as if I'm looking at this world through a pair of goggles full of scratches.

To understand the situation, I narrow my eyes for quite some time to think.

After that, I notice something.

Noticing a presence, I turn my head around and see a robot.

This is an eccentric robot.

His head that is like a steel bucket is embedded with eyes that are like the lens of binoculars, and he also has a mouth that is actually a small speaker. His appearance is completely the style of last century experimental products made by science school students.

His body is also appalling. His left arm is shorter than his right arm for ten centimeters, each finger swollen as if they were scalded. His legs are non-existent, and what replaced that is a continuous track that is full of rust. The sizes and coordination of the parts on his body is very uncoordinated.

He's probably one of the simple robots made using some spare parts from second hand shops. The ones that are connected to a core of the system and a mental circuit, then forcibly reactivated robots. That's probably it.

This robot stared at me from just now.

Feeling somewhat uncomfortable, I retreat backwards, and that robot went backwards at the same time.

I raise my 'right hand', then the robot raises his 'left hand'. It's like I'm looking at a mirror.

I look at my hands. At the tip of my fingers are five swollen fingers like what the robot in front of me has.

The possibility makes me tremble. Even so, a convinced feeling surge up in me. I had been dismantled, becoming scrap metal. How can I have my original body, then?

I turn my continuous track to get closer to 'him'. 'He' approaches me as well.

The strange robot reflected in the mirror is unquestionably, me.

I stare at 'him' for a moment. As I am too shocked, I cannot say a word. Not even moving my body. 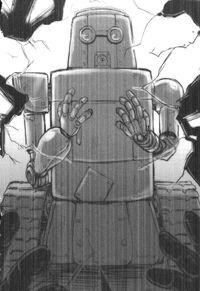 My thoughts cannot follow what is happening on myself.

I look at the robot in front of me once again. A head like an overturned bucket, eyes like binoculars, and a small speaker for a mouth. An exceptionally short left arm— no, is this the right arm—

I start to feel nauseous. It is a strong sense of nausea that surges up from the bottom of my throat, as if my body is gradually rotting completely. My body undergo slight spasms for awhile, suppressing the vomit that would be impossible to come out.

After the feeling decreases, I suddenly start to detest 'him', in front of me. It is a self-disgust that is so severe that it can make people lose hope.

After that, I acted like I turned crazy— I might already be crazy, in reality— and start to hit my head on the mirror reflecting my outline. As though I can deny my current appearance by doing that.

It's a lie. No. I don't want to believe this. I curse the robot in front of me repeatedly.

Why is such an ugly robot me?

Probably because of the impact of collision, a clanking sound suddenly comes from my skull. It seems that a part fell down.

I make up my mind. I don't need a body like this. I can just crush it to dust. Just let it be broken to pieces.

Therefore, I start to hit my head again. Using all my strength, hitting my head again and again. I cannot feel pain. Cracks appear on the mirror, and my head becomes somewhat deformed.

An angry roar echoes from behind me.

At the instant when I hear the order, my body suddenly freezes. My body cannot move, like it has been frozen solid.

A man in a gray clothing walks over to me. A badge that seems like a company logo is adorn on his chest.

The man walks to my front, and stares at me with dark eyes like a muddy quagmire.

My voice is no longer the voice of a young girl, but an ordinary electronic voice. That is a mechanical voice that lacks self-assurance.

My mind is still confused, but my body starts to move creakingly, going backwards slightly. At this moment, I realize that the thing that I rammed my head against is a large looking glass. Apart from the mirror, quite a lot of junk are piled up in the area.

The angry roar of the man caused my body to freeze up, and my continuous track start to move by itself.

Thus, I start to carry them. Though I don't feel like doing that, I cannot disobey my orders. The compulsory command code hidden in my safety circuit caused myself to move without being able to disobey the orders.

Where is this? Why am I doing this job? I have absolutely no idea. I carry the materials a few times, tens of times, going back and forth in the construction site. When I stop walking, angry shouts would fly over like an arrow. Every time, my body would freeze, and move without my permission like I'm being hypnotized.

Finally, the gray sun sunk down the horizons. Even so, the 'labor' still continues.

Late night. Finally finishing our work for the day, the other robots and I gather near a warehouse. Rubble and other waste materials were piled up in the warehouse, while square boards are arranged neatly in front of me. These one meter square boards are charging boards. The robots line up in a row in front of the charging boards, connecting the plug onto theirselves one after one. The scene looks like corpses from graves lining up to obtain nutrients.

I stand in front of the tombstone, waiting for my turn. When the workers appear, the cover in front of my chest is opened with a creak, then a thick wire is plugged into it.

Soon after, I lose my consciousness.