“A Tale of a Sniper” —Fatalism—[edit] 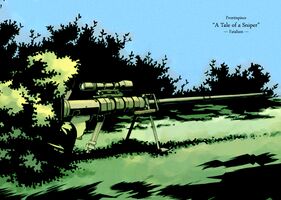 There was a dense forest. And there was a tall hill, from which one could observe the forest in its entirety.

Atop the hill, a sniper lay in wait. Armed with a powerful long-range persuader (Note: A gun) built for sniping, he kept a watchful eye over every corner of the forest.

Something moved beside a serene lake. The sniper shifted his attention in that direction.

The image of a joyful looking man, stark naked, reflected on the sniper’s eyes.

The sniper hesitated for a while, then brought his rifle to bear down on the short but rather good-looking man. Once he pulled the trigger, and the bullet flew at an amazing speed, the man would probably be dead, and the lake would probably be tainted with bloody red.

The sniper slowed his breathing to reduce any shaking in his hand. When he was ready, his finger reached for the trigger.

The sniper heard a sharp, determined voice speak behind him. Caught up in surprise, he slowly turned his head and came face to face with a woman.

She wore elegant clothing and had dark, glossy hair. A beautiful woman, without a doubt. With her right hand, she held a high-caliber revolver aimed squarely at the sniper’s head.

“Sorry to have frightened you, but please don’t move. If I miss, it would be a waste of bullets and powder.”

“Why do you want to kill me?” the sniper asked guardedly.

The woman smiled, her persuader never moving an inch.

“Because you have killed those who entered the forest. The friends and families of the victims wanted you dead.”

The sniper replied tensely now, “So you are here to kill me.”

The woman nodded and the sniper continued, “Then what are you waiting for?”

A pained look appeared on the woman’s face. “Good question.” The woman ventured to explain: “Actually, after I accepted this assignment, I agreed to another contract from some people from the same country.

“They paid me equally to not kill you because they wished for everything to remain unchanged. There are many who hate you. But there are also people who are grateful to you for removing their enemy, letting them receive their inheritance early, releasing those with incurable diseases, and allowing some to start anew. So there are just as many people who wish for you to remain alive. To them, you are like a god of good fortune.”

“I was indecisive on what to do as I came here to scout you out. I still can’t make up my mind right now.”

“If that’s the case, then please give me an order. Before now, I would kill all who I found, but from now on I will only kill a person upon a certain count. That way, the number of deaths would drop yet there will still be victims. As for this count, it is up to you to provide.”

...the man was still swimming naked in the water...

The woman gave the sniper a number, then left him on the hill and returned to the forest. Since it was a complex number that required very difficult calculations, it will not be written here.

At the lake, the man was still swimming naked in the water. Upon seeing the woman, he ran towards her with a look as if he was about to cry.

“Master! What took you so long! I thought we were done for.”

The woman stood rooted to her spot and told him to shut up and put on his pants.

As the man pulled on his pants, he turned to face the woman.

“We are still alive. That means you killed him, right?”

The man leapt when he heard this, accidentally putting both legs into the same leg of his long pants, causing him to trip and fall.

The woman explained the deal.

“B-but with that number, the possibility of getting shot at any moment is…”

The woman barely gave the matter any thought and walked towards their car, a run-down little vehicle on the verge of falling apart. The man hastily followed her.

Once inside the car, he asked, “What now? We can’t return because we didn’t kill the sniper and yet we didn’t let him continue killing unchecked. We can’t receive a reward from either side.”

The woman smiled gracefully and started the engine.

“Since we already have the down payment from both parties, let’s just disappear with it.”

The man was about to say something, but the woman ignored him and stepped hard on the gas.

The moment the car jerked forward, a bullet came flying toward them, splitting a tree where the car had been just seconds ago.

To this day, the forest still remains and the sniper still waits on the hilltop. 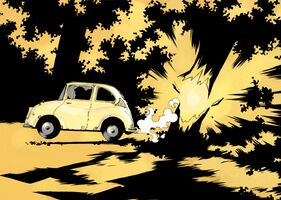 ...a bullet came flying, splitting a tree where the car had been just seconds ago.