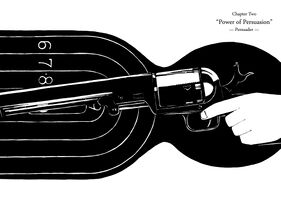 It was a tall, dense forest where a variety of grass and trees flourished. The afternoon light peeked faintly through the gaps between the fresh green leaves. The soft chirping of birds could be heard.

A deer and its young chewed on a row of grass, slowly savoring the meal.

Suddenly, the parent deer raised its head. Its offspring was still engrossed with the grass. Along with the sound of grass being brushed away, a human suddenly leaped out from a thicket.

The deer, startled, became petrified. The human, also startled, aimed the persuader (Note: A gun) she was holding towards these figures.

It was a young person. She seemed about halfway through her teens, or perhaps a bit less. She had on blue trousers covered with dirt and a somewhat thick, green-colored jacket. She wore a brimmed hat with flaps that covered her ears, and for some reason there were goggles over her eyes. The expression behind the goggles was rigid, and she appeared fearful.

The human, watching the deer disappear, let out a breath. After a short break, she ran off once again. The persuader she held was a slide-action shotgun, with a tubular magazine attached underneath the barrel.

After running for a bit, the human concealed herself by sliding behind a thick tree. Immediately, she aimed her persuader in the direction from which she had come. Opening her large eyes wider, subduing her breath, she searched for something.

Finally, a thicket rustled softly. The human reflexively aimed at it and fired. With a thunderous roar, the grass of the thicket danced wildly. There was no one there.

The human clicked her tongue without raising her voice and fled from behind the tree. With her left hand, she slid the fore grip underneath the barrel back and forth. A spent shell flied out and the next charge was loaded.

Holding her head low, she ran desperately without looking behind her. After jumping over several bushes, she hid herself just as she had done earlier. Her breathing became rough.

She hurriedly wiped the sweat off of her eyelids and touched the lens of her goggles with the back of her hand. Without realizing, she repeated this action several times

Suddenly, the face behind the lens slackened.

“‘Settle down, Kino. Always be calm. Save your nervousness and fear for later.’”

The human, as though someone was instructing her, muttered with a soft voice.

The human who called herself Kino, smiling softly, grasped her persuader again. She produced a single round from the pouch on her waist, and inserted it inside the magazine.

Holding her persuader reverently in both hands, Kino closed her eyes. She seemed to be in a meditative state under the shadow of the tree.

Several seconds passed in silence as she remained there, unmoving.

From a place not far from where she was, the sound of something lightly stepping through grass could be heard.

Upon hearing the next sound, Kino pointed her persuader in the direction it came from. She fired.

The shot only went through the blades of grass. A little to the left, the thicket quivered. Kino loaded the next round and aimed. The moment she was about to fire, a person’s hand appeared in the shadow of a tree to the right, aiming a hand persuader towards her. Kino frantically shifted her aim, and was shot at just before she was able to perceive the line of fire.

The bullet hit her hat on the part where her forehead should be, and bound back. It hit the branch of a neighboring tree, bounced, and fell on top of the ground a bit ways off. It was a spherical rubber bullet, with a diameter of about ten millimeters.

Asking this, the human who had shot Kino appeared from behind the tree.

It was an old woman with a smile lingering on her face. She had a slender body and her silver hair was neatly tied behind. She had slim trousers on, and wore a light green cardigan above her shirt. She had goggles just like Kino. In her right hand was a high-caliber revolver.

“It hurts. But if I have to be specific, I’m frustrated.”

Kino was still pressing on her head, and answered with only her gaze raised.

The old woman took off Kino’s hat and goggles. The skin was torn a little bit on her forehead, and a small amount of blood was flowing out. From Kino’s jacket pocket, the old woman took out a small cloth and a tiny bottle of antiseptic solution. She wet the cloth with the solution and attached it to Kino’s forehead with tape.

“Since you’re still young, you’ve got to take care of your face,” said the old woman with a kind smile.

There was a narrow path in the forest. There, a motorrad (Note: A two-wheeled vehicle. Only to note that it cannot fly) was propped up on its center stand. It called out to Kino and the old woman as they parted the grass on their way out.

“Sorry to have kept you waiting, Hermes.”

The motorrad asked but one word to the old woman regarding Kino, who wore a heavy expression.

Kino, not saying anything, pointed to her forehead.

“Well, you still have a long way to go. Now, let’s go home and make something to eat.”

Saying this, the old woman put away her revolver in a handbag resting on Hermes.

As Kino passed her persuader to the old woman, she climbed onto Hermes and turned on the engine. Its blaring roar echoed through the forest.

The old woman sat sideways on a cushion spread across the rear carrier. Kino then slowly launched Hermes off.

“Kinooo, it’s no good to be depressed like that,” said Hermes as they ran. Kino remained silent despite Hermes’ words. The old woman only looked behind them with a nonchalant expression.

After running for a while, Kino suddenly stopped Hermes.

“Three people, huh?” Hermes said with a small voice. There was the usual path surrounded by the forest. However, a bit further ahead, one side of the path was cleared to give way to a field. Up ahead, a small house could be narrowly seen.

Kino turned to the old woman and asked,

“Is the gunpowder seller coming today?”

The old woman shook her head.

“On my signal, restrain the movements of those people. I will speak to them alone first.”

The old woman handed Kino the persuader that she had used earlier.

“If something happens, then, and only then, will I help you. This is good training.”

“Kino. Didn’t you say that you want to become stronger?” said the old woman to the hesitant Kino, a smile across her face.

Kino grasped the persuader, and nimbly disappeared into the forest.

As the old woman sat on the rider’s seat of Hermes and gripped his handlebars, Hermes spoke with a feeble voice, “Um… please don’t knock me over, okay?”

The old woman nodded several times. Holding the levers in her hands on both sides, she said, “Don’t worry, I still remember. This one’s the brake, and this one’s the clutch.”

“It’s the other way around…”

There was a small log house in the middle of the forest and the garden.

In front of the entrance, there were three men. No matter how you look at them, they appear to be thieves — a fat man, a thin man, and a man with a scar on his face. They were each holding long, rifle-type persuaders. The horses they had ridden were tied to the entrance.

The men heard the roar of a vehicle’s engine, and soon saw an old woman riding unsteadily on a motorrad. They gave a hefty sigh.

The woman somehow managed to stop Hermes in front of the house and the three men.

“No, that’s not how you do it! Put the kickstand down with that foot…”

“This one? Oh, this protrusion. Now I remember.”

“That’s right. Ah, but the ground is weak… use the center sta…”

The old woman finally managed to put out the side stand, picked up her handbag and dismounted. The side stand slowly sank into the ground and Hermes collapsed to the side.

One of the thieves stepped forward.

“Is this your place, old lady?” he asked in a loud, crude voice.

“It’s rare for us to have visitors. Come in and I’ll make you some tea.”

“Tea would be great, since, after all, we’ll be taking all that you have that’s of any value! If you do as we say, maybe we’ll spare you your life. Or else——”

“We’ll beat you up in this place and you’ll expose the air to the stench of your putrid corpse.”

“You are threatening me, are you not?” the woman asked as if seeking confirmation, and the thief answered with a hoarse voice,

“That’s right! Old lady, is your Alzheimer’s kicking in? Can you even hear me?”

The old woman put her handbag in front of her.

Kino jumped out from the forest and fired. A rubber bullet hit the fat man squarely in the head, and he fell over sideways. Crashing into the tall man’s chest, she hit him hard in his nether region with the stock of her persuader, then whirled around and delivered an uppercut to his jaw. Using the fallen body as a shield, Kino went for the last man, shooting both of his hands.

Dropping his weapon and grabbing his pained hands, the man with a scar on his face let out a yell. His two partners were lying horizontally on the ground, completely unconscious.

Kino continued to aim at the man carefully. To his side, the old woman spoke.

“Don’t be afraid, we won’t take your lives. Instead…”

“Please take out anything of value that you have.”

“If you’ve done other jobs before this, you must have something, right? So, like I said, give me your valuables please. Or else…”

The old woman gave him a sweet smile.

Seeing the man nod over and over, Hermes, still on the ground, muttered,

“If you go on from here for about half a day, you should be able to see a river. It’s pretty shallow, so I’m sure you can cross with a horse. ——But, until you reach that place, you must never look back.”

Listening to these last few words of the old woman, the pale-faced thieves took their leave.

Her face filled with curiosity, Kino followed them with her eyes.

The old woman, who was carrying a bread basket full of gems and bracelets, spoke to Kino, “You did wonderfully. Well, let’s prepare some food.”

Kino looked at the old woman and nodded.

As the two turned on their heels and were about to enter the house, Hermes spoke.

It was evening inside the forest.

Kino went out from the back of the house, holding an adze. Hermes was propped up next to the window.

In a nearby clearing, there was a mountain of firewood yet to be chopped, and a tree stump cut down obliquely, its tree rings facing towards the house.

Kino spoke suddenly as she selected several pieces of firewood.

“If those thieves are so weak, why were they going around stealing stuff?”

“I don’t really want to say this, but… was I really in any danger?”

“… Well, it doesn’t mean that those guys are particularly weak…,” Hermes said in a low voice to Kino who had a doubtful look on her face.

Kino turned around. There was a small bruise on her forehead.

“No, it’s nothing. More than that, just hurry and finish chopping the wood.”

Kino placed the firewood on the slanted tree stump.

She went over to where Hermes was, and picked the adze back up.

She threw it at the firewood.

The adze spun twice in midair, and cut the firewood clean in half.