“A Land of Love and Peace” —Power Play—[edit] 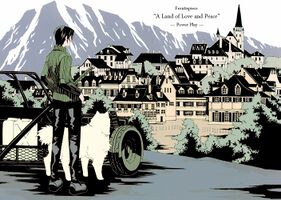 My name is Riku, I am a dog. My master, Shizu, is a traveler. This is a story about a certain time in a certain country.

From the driver’s seat of the buggy, Master Shizu sounded surprised as a country came into view. Usually a country would barricade itself with castle walls for protection against foreign enemies; however, this country had nothing but a small fence to keep animals in. Master Shizu met with the leader and asked if there were no walls because the country had an unmatched army.

“There are no such barbaric things in our country,” said the leader with a sinister grin.

“Then how do you protect your citizens?” Master Shizu asked somewhat shamelessly — as expected of the former prince.

“You’re too old-fashioned,” said the leader with a condescending tone.

Master Shizu asked if there had been any attacks up until now.

“Based on my personal experience, there’s more than I can count on my hands and feet. Despite this, all matters were resolved peacefully, and it will stay that way. We have no need for murderous groups or walls that will hinder the natural scenery.”

Then the leader said this with a dubious look on his face and with his chest stuck out,

“We have a ‘Love and Peace Song’. If we sing it, we can defeat our enemies without fighting.”

“They seem to be at ease even without gates. It’s bothering.”

Master Shizu’s expression indicated his worry about staying for too long in this country. He had wanted to leave, but because the buggy needed repairs, we decided to stay.

One morning, the entire country was in an uproar. Word came from across the plains that a neighboring country’s army would be attacking. The enemy troops sent a messenger, who informed us that a general offensive will be launched the next morning.

The leader came to see Master Shizu with a pleased face, and spoke to him with a hint of sarcasm in his tone, “Well then mister traveler, I’m going to show you a beautiful spectacle. Tonight will be fun.”

It became night. Light from a campsite could be seen beyond the fences. On our side, a bonfire illuminated a large stage which had been prepared beforehand. Master Shizu was beckoned by the leader, and he came, wearing his favorite sword at his side. Master Shizu sat on a chair on the side of the stage, and I settled between his legs.

The enemy troops formed its ranks and began marching until they were lined up in front of the stage.

“Look at these fools only capable of violence. And yet they will lose to us again.”

The leader scornfully laughed and gave his subordinate some instructions.

Master Shizu whispered to me, “When it’s time to run, stick to the usual plan.”

People gathered on top of the stage. No matter how you looked at it, they seemed like a chorus group. Matching the rhythm of the conductor’s baton, they suddenly began singing. It was a gently hummed melody. Before long, a beautiful woman in a flashy dress appeared on the stage. Accompanying the back chorus, a lovely voice began singing. 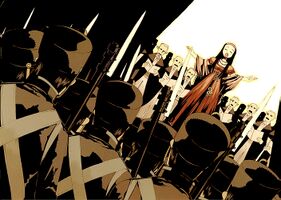 The lyrics were along the lines of: love and peace are best, fighting is foolish, kindness deep down in your heart, throwing away weapons and picking up farming tools in their stead, and so on. Master Shizu looked like he had overslept and had a headache.

Suddenly, the enemy soldiers who had just been staring at the spectacle started to change. Everyone put their weapons at their feet and moved to the beat of the song. The songstress had just stopped singing and was hailed with applause. Everyone joined in happily with the merrymaking.

“Take a look, mister traveler. They no longer have any interest in fighting. The ‘Song of Love and Peace’ changed them. Hmm… that’s right. Mister traveler, our messenger relayed the following message: ‘The war is over. We listened to your splendid song, and we shall now return home.’ Now, shall I treat you to some food and wine? Why not also lay down your weapon, mister traveler?”

Before the beautiful woman on the altar who was singing strongly from a sense of duty, the recklessly roused onlookers in military uniforms, and the leader triumphantly speaking in his mocking tone, Master Shizu had been thinking about something.

The next morning, the buggy’s repairs were finished so Master Shizu and I quickly left. Around noon, we caught up with the soldiers from the night before who were taking a break.

Glaring at a soldier from a distance who was pointing a persuader (Note: A gun) at us, Master Shizu said,

“Are you going to shoot me? Are you in charge here? If not, doing as you please won’t be good for your superior officer.”

After saying this about five times, we wound up in front of the general. He formally apologized for his subordinate’s impoliteness.

Master Shizu carefully introduced himself as a traveler who had no intention of ever returning to that country. And then he said,

“You were never planning to invade that country from the beginning, were you?”

The general laughed and nodded.

“Yes. That’s where the soldiers relax. The lyrics have no meaning to them, and they don’t know about the declaration of war either; they’re just happy for an opportunity to party. We told them our vassal state was having a celebration banquet to thank us for protection, but we must be ‘quiet at first’.”

“I see. Then who is your real enemy?”

“A large country across the mountain range. It has incoherent national policies. They are an evil empire, and exterminating them is our noble mission. If they were to invade that country then they would be ‘committing an injustice to our vassal state’, and an all-out war would start. Justice is on our side though, so victory will be as well.”

We returned to the buggy, and I asked Master Shizu if we will be visiting that army’s country. Master Shizu shook his head.

“I’d rather go to a country that doesn’t only think about war.”

“Those are hard to find.”

“Yeah… Sorry for making you live such a vagabond life,” said Master Shizu as he leaned on the steering wheel, looking at the blue sky.

“It doesn’t matter to me. Wherever Master Shizu is, I will be,” I answered honestly and Master Shizu looked at me.

Master Shizu was silent for a moment, and then gently smiled as always.

He started the buggy’s engine as usual.