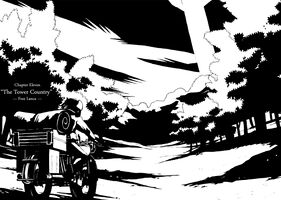 There was a traveler named Kino. Despite her young age, she was very skillful with persuaders (Note: A persuader is a gun. In this case, a pistol), and almost no one could surpass her.

Kino’s partner in her travels was a motorrad called Hermes (Note: A two-wheeled vehicle. Only to note that it cannot fly). His back seat was turned into a carrier, and was piled with tons of luggage. Since Kino was a traveler, she was visiting many countries.

Once, Kino and Hermes saw a very high tower beyond the forest up ahead. Because it was extremely high, it could be seen even from a rather great distance and it looked like a thread hanging down from the clouds.

After Kino and Hermes arrived there, they discovered a country surrounded by common walls with the brick tower in the center of it.

When they entered the country, they saw a great number of people working hard beside the tower.

“Welcome, traveler. Please feel free to take a look around,” said a citizen of this country.

“What a magnificent tower. If you don’t mind, can you tell me how long it took to build it, and what the purpose of its construction is?”

“It took 230 years, but no one knew why it was built,” the man said without hesitation, and then continued:

“The construction of the tower started long ago, even before letters were created. The purpose is a matter of no consequence. This tower is what makes our life worth living.”

The next day Kino woke up at the crack of dawn.

When the sun has risen significantly, Kino slapped the sleepyhead Hermes as usual and they went to view the tower. Since the weather was great, even the highest points of the tower were visible, though barely.

Near the tower, the people were drying the earth carried by the river and were making bricks. The bricks were transported using the stairs in the center of the tower, and the tower grew higher and higher. Sometimes the bricks that were not installed properly fell down from a monstrous height, so it was quite dangerous.

Kino was inspecting the tower very cautiously, but with great interest. Hermes, who usually makes remarks about buildings, muttered weakly:

“Kino, it’s going to fall apart. There are a lot of cracks at its foundation. It can collapse even tomorrow, if there comes a strong wind.”

Kino nodded lightly, but she didn’t tell anyone about this.

A storm arose at night.

The next day, in other words their third day in the country.

While Kino was diligently eating her buffet-style breakfast at the inn, a great noise was suddenly heard from the outside. Someone screamed:

“The tower is falling apart! Be careful at the west side!”

Kino and other people who were at the inn ran outside. They saw the tower slowly crumbling down. Its foundation became weak and broke into pieces. Unable to hold its weight, the tower collapsed completely in a while.

Soon, after the roaring sound has stopped and the air has been cleared of dust, everyone saw a huge pile of bricks lying at the place where the tower stood earlier.

The people danced atop of it, letting out screams of joy:

“It fell apart! It crumbled!”

“It collapsed in our generation! I’ve seen it with my own eyes!”

A man spoke to Kino:

“Miss traveler, the tower has finally collapsed. We’re so happy that we’ve witnessed it.”

“What are you going to do from now on?” asked Hermes.

The man instantly answered: “Well, of course we are going to build a new one! We’ll try our best to build it in such way that it stands for 300 years!”

Soon the citizens of the country gathered a meeting and started a discussion.

“There’s no doubt we must use huge bricks to lay the foundation. And this time let’s try to make the tower slightly conical.”

“We should also think of the wind. What if we polish the outer bricks? It will probably weaken the force applied to the whole tower.”

“Let’s talk about the schedule. During the next ten years we will remove the bricks, and work out its design. During the following twenty years we’ll make the bricks for the foundation. And during thirty years after that the foundation will be complete. From that time onwards the tower will steadily grow higher.”

“We are going to leave the country soon. Take care.”

And saluted them. The people waved their hands with a smile.

Kino was about to return to the inn, when a man approached and addressed her. He seemed rather impatient.

“Can you do me a favor?!” he said, as if clinging to her. Kino asked what he wants.

“Please take me with you!” said the man.

Kino asked him why, and the man replied:

“I’m fed up with this country. To build a tower just to see it collapse at some point — it’s absurd.”

“Miss traveler, perhaps you also think that our country is really strange and that we are mad. Please tell me frankly what you think!”

“I have no idea. I don’t know if it’s everyone who is mad or just you.”

The man made a tearful face and asked Kino:

“I beg you, take me with you. I don’t want to live in this country. Help me!”

Kino said that it wasn’t possible. The man tried to forcefully persuade her. He said that if she doesn’t want to get a painful experience, then— But Kino interrupted and said that in this case they both would be in trouble, and showed him a persuader under her coat.

The man flopped down and burst into tears.

“I’m fed up with such a life…. There’s no freedom in this country. If you are against the construction of the tower, then, being a traitor, you’ll become a human pillar[1]. What am I supposed to do…”

Kino asked Hermes what “human pillar” means. He explained it simply, and Kino said, “I see.”

The man continued to shed tears:

“I don’t want to build this tower my whole life. I’d like to do something different than that. But there’s no freedom in this country. I want liberty.”

Kino glanced at Hermes and then whispered to the man’s ear:

“If you don’t want to build the tower, just do something else; for example you can make carvings on the bricks. In that case you’ll be able to make a great number of magnificent bricks, what do you think?”

The man suddenly raised up his face. His eyes, a moment ago full of tears, opened wide.

“Of course! It’s fun! I like it! I’ll do this from now on! I can freely carve different patterns on the bricks!”

The man stood up and while joyfully hopping, rushed to the other people.

“Please listen! From now on I’ll be making carvings on the bricks! One by one, they’ll become really beautiful decorations!”

“I agree! We can use it to decorate the stairs, for example! It’ll be so wonderful!”

“Alright, people! Let’s entrust this to him!”

Kino and Hermes left this place and returned to the inn. They loaded their luggage and left the country.

Kino’s journey is far from over, but this story ends here.