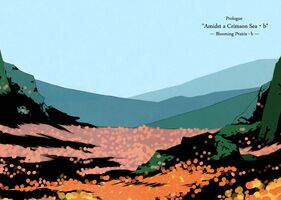 A singing voice could be heard.

It was a crimson world.

Deep red flowers covered the surface of the ground as far as the eye could see.

There was nothing, except for the expanse of blue sky.

No one could be seen on the prairie.

Even so, the singing voice flowed through the space of crimson and blue.

It was a song which was slow yet lively.

The song continued in joy and melancholy.

Finally, the song ended with a beautiful, extended, high-pitched note.

Soon after the song had ended, a voice could be heard calling out,

“Or what?” asked the voice which had been singing.

“Or you could pick me up,” the first voice replied.

“Ahaha. I understand, then just one more――”

The singing voice was heard once more throughout the crimson prairie.

When the song ended, the first voice asked,

“Yeah, let’s do that,” the first voice gladly agreed.

“About time you picked me up, Kino.”