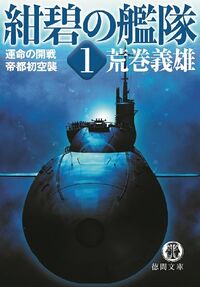 The novel series, Konpeki no Kantai (紺碧の艦隊, lit. "The Deep Blue Fleet") was written by Yoshio Aramaki, and the first volume was published in December 1990. The novel's popularity reportedly rose dramatically due to the start of the Gulf War the following month. Aramaki later wrote a different series called Asahi no Kantai (朝日の艦隊, lit. Fleet of the Morning Sun). The two series, totaling some 25 volumes, eventually sold more than five million copies.

Over time, the series was adapted into manga, original video animation and game form.

Admiral Isoroku Yamamoto and his staff are flying to visit the soldiers in the south-central Pacific April 18, 1943 when they are attacked and their aircraft shot down. Just before his damaged plane crashes into Bougainville Island, Yamamoto blacks out, then wakes up inside a ship. Unclear about what has just happened, Yamamoto speaks with a crewman, and discovers that he is aboard the Japanese cruiser Nisshin. He is then informed that the date is May 28, 1905 and that Battle of Tsushima has just ended. Yamamoto realizes that he has somehow been transported back in time (or to a parallel world).

After Yamamoto decides to revert to his old name of Isoroku Takano, he vows to use his advanced knowledge of the next 38 years to ensure that Japan does not make the same mistakes as before.

Yamamoto's first priority is to spearhead a massive naval construction program. It involves building a large fleet of advanced battleships and supercarriers, nuclear submarines based on the design of the real-life I-400 Sen Toku submarine, and advanced combat aircraft that were in prototype or concept form during the late stages of the actual Pacific War.

His plan for success begins with a coup d'état against the hardline government of Army General Hideki Tōjō in late 1941, on the eve of the Pearl Harbor attack, and installing an ally, Lt Gen Yasaburo Otaka as prime minister. Otaka, who has also been transported back in time, agrees to work with Yamamoto to change history and ensure that the Japanese Empire emerges victorious against the United States in the Second World War.

The Konpeki no Kantai series by Yoshio Aramaki[edit]

The Konpeki no Kantai series by Yoshio Aramaki.

Volume 1 - The Destined Outbreak of War[edit]