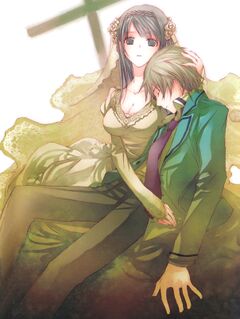 Kyuuketsuki ni Natta Kimi wa Eien no Ai wo Hajimeru (吸血鬼になったキミは永遠の愛をはじめる, You Who Became a Vampire Begin an Eternal Love) is a light novel series written by Mizuki Nomura, the author who also wrote the Book Girl series and the Hikaru ga Chikyuu ni Itakoro... series. The illustrations are done by Miho Takeoka who illustrated both series mentioned above. The series is complete with 5 volumes.

In May of his first year in High School Harada Utaya became a something that's not a human being. He gained inhuman athletic abilities and was unable to continue play his beloved basketball. He changed schools and there he met a beautiful - Virgin Mary-like senior named Harushina Ayane who asked him to be her "lover" Dracula in a play?!

This is a hosted project. The chapters will be added here by the translating group after 24 hours after publishing it on the translator's (Heart Crusade Scans) website.