Hello everybody, it's been a while.

The sixth installment of this series could be considered a special side story, I guess. Briefly summarized, it's "let's have a great adventure in Demon King Solomon's dungeon!" This product was designed for chatting with Hazumi-san and showing off sweet moments with her whenever there were casual scenes in the adventure.

(rustle rustle) Note: the sound of someone hiding in the shadows

In a way, this volume's main theme is "this month's special: Shirasaka Hazumi." Actually, it's a "Shirasaka Hazumi Fan Disc Project" with elements of "why not have a short story collection with Hazumi-san as the main heroine?" (laugh)

I came up with many different versions for the outline, but the previous volume ended at that kind of spot after all...

So in the end, this kind of story was what turned out.

This volume was one spent on describing the main character's various characteristics along with Hazumi-san.

His insight and initiative are outstanding when confronted with his realms of expertise, but completely disinterested in the face of subjects outside his specialty. A personality of extremes. Starting next volume, he will be swept into a tumultuous(?) romantic comedy, so my plan was to give supplementary lessons to him and Hazumi-san, a pair who are inexperienced at dealing with this sort of stuff.

By the way, I don't put too much personal feeling into characters making their appearances, so I place all of them at roughly the same level while I watch from afar.

But I definitely wrote this volume with a desire to give preferential treatment to Hazumi-san. (laugh)

Given her personality, she's not going to get too much screen time normally, so a bit of favoritism should be fine once in a while. On this point, I suppose one could say it's a reward for her daily conduct.

Only limited to this volume, she literally became the main heroine...

I don't think any character in the story would complain about this level of favoritism, so just think of it as an occasional celebratory project... Oh my, however— 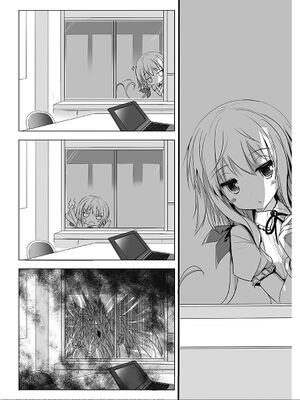 Technically, I think I can think of one character who might have complaints, but in a certain way, she gets special treatment in every volume's afterword.

Hence this time, I deliberately promoted Hazumi who's normally positioned third or fourth.

Oh, I'm not trying to explain myself to a certain someone.

(Hmph—!) Note: the sound of someone angrily snorting through their nostrils

...Darkness seems to be lurking restlessly outside the window.

If this were happening inside a creation myth of cosmic horrors, I think writing "The window! The window!" (Note 1) here would make it the final climax where one can't help but throw a punchline "Stop writing your diary, novel or whatever it is there so leisurely and start running!" Or would it be the final scene where I sing "Cthulhu fhtagn! Iä! Iä! Iä!" (Note 2) while setting off for the nostalgic ocean?

For readers who don't get the references, let me explain.

Note 1 is a story about a monster outside the window, an evil deity's minion.

Note 2 is a story about a reckless human wanting to uncover the secrets of a great deity hidden in the underwater ruins of R'lyeh. Turned half-fish by ominous black magic, he swims happily to return to the ocean.

I think I'd better flee as quickly as possible...

"Hold it right there!"

"Ignoring me the whole time from the very start, what are you trying to pull!?"

...You've got me wrong, Asya-san. I was thinking perhaps I should stop using this style of "dialogue with a character in the story" afterword that's more representative of the 1990s. You mentioned it before too.

"What!? What are you talking about? By this point, readers would be expecting this—or rather, they're expecting me to make an appearance!"

But I think everyone already predicted this kind of pattern.

After all, more than likely, Asya's gonna make a big scene in the afterword again—Something like that. Wouldn't it be entertaining to give readers a surprise~?

"R-Responding to reader expectations is part of the spirit of service, you know? And everyone is looking forward to someone barging into the afterwords of this series!"

As such, I have invited another guest for our readers today.

From Volume 2 of Why not go to JUSCO, Valkyrie? (女騎士さん、ジャスコ行こうよ) that's being released this same month, I've specially invited one of the heroines, Princess Po. Please come in.

Hello everyone. My name is Princess Po.

I shan't take offense from anyone who is thinking "who the hell are you?" right now.

I permit you to swiftly make your way to the nearest bookstore to purchase the first two volumes of Why not go to JUSCO, Valkyrie? published by MF Bunko J.

Or rather, everyone, please buy these books.

Well, if one really had to explain to those who know absolutely nothing about this series, it is an epic story about a princess of the Magic Horizon, the beautiful maiden known as Polilifa the "Buttercup Princess"... i.e. myself, on a quest together with my trusted knight and beautiful maiden, Clauzela, in search of the utopian realm of JUSCO located somewhere on Earth.

It is a wholesome adventure story unfolding across Gifu Prefecture on the boundary between land and sea with absolutely nothing to do with terms like "h-game", "rape", "tentacles", "ugh, kill me now!", "gufufufu, looks like making you depraved won't be that easy", "a run-of-the-mill pervert", "sadness on the level of a 'common rural story' would be too realistic, so it won't be used to promote urban development even if it ends up animated, right?", "super steady borefest", etc.

The 580 yen (tax not included) x 2 volumes from everyone will surely enable me to get a step closer to JUSCO.

...I've been wondering whether I should find someone like this as a partner for the afterword.

I also have plans to borrow the school idol Water God-san (note: tentacles included) from next door, asking him to speak in human language for once.

"You've already got me, a beautiful maiden from this series, why on earth are you summoning characters from other series!?"

I happen to be writing the afterword in a conference room at Media Factory.

Then my old friend—a certain Mr. Itou Hiro, author of JUSCO—was there too, so I asked if I could borrow Princess Po for a moment and he agreed.

"Both the person who asked and the one who granted permission are messed up in the head!"

Oh dear. Volume 6 has a kind of side story feel, so I wanted the afterword to be more fun too.

"Ughhhhhh. So that's why middle-aged guys who prioritize their own hobbies during work have no future..."

It's important to find a breather during hectic work. If you're too busy, making your nerves tense all the time, you could easily have a nervous breakdown.

"Please don't use well-known sayings to wrap up your malicious pranks! Oh, you've already used up quite a few pages on the afterword. Isn't it time to finish?"

No helping it. Let's put it away for now.

Starting next volume, I expect the stage to finally return to Tokyo New Town with major battles and a climax in the plot.

A formidable foe from the past will rise up from past setbacks, working in secret to regain his honor.

Then the final boss and "true heroine" will return to the main story in peak form.

I guess I might as well trouble him to draw Princess Yukikaze on the cover again. As the author, since a long time ago, I've—Oh, what's the matter, Asya-san?

"Nothing. This is a rare chance to announce important news of great memorable value, but somehow I get the feeling that the focus has been cleverly obfuscated..."

"I can't believe you're getting in the way of my moment under the spotlight... (muttering)"

How should I say this. I definitely committed it firmly to memory. During the 2014 Summer Heroine Contest, Asya-san, you achieved the excellent result of fourth place overall.

In fact, I have prepared a place for you to celebrate.

I've already booked a table at a certain restaurant and secretly called up the usual lineup... So tonight, please enjoy yourself.

"W-What is with this sudden change of heart of yours!?"

Nothing of particular significance. I do occasionally want to repay you, Asya-san, for leading this series. I did this purely out of goodwill and benevolence.

"This response seems so fake and suspicious..."

Stop being so distrustful. Isn't it time for you to get going?

If you refuse to participate, I'll just have to call everyone who are gathered over there to "forget Asya-san and just have fun on your own"—

"Oh, no. I intend to enjoy myself first and ignore this stuff for now. Naturally, you're paying for the meal, right?"

"Very well. I'll be going then! Also, pick me for the cover of Volume 7! Since you've rotated through the heroines once, I think I should be on the next cover as the true main heroine!"

I'll consider it... But it might be nice to suddenly let certain supporting characters take the spotlight next time. Like Mutou-san or Funaki-san. The cover might turn out to be them as a surprise...

"(Yelling while running) What did you just say!?"

Nothing. Nothing. Well then, take care, dear readers.