The Conclusion between the King and the Imitation

Asya and Juujouji Orihime had stayed on the Moon to control the Rune of the Mother Dragon.

Normally, it would be impossible for anyone to know Haruga Haruomi's situation thirty thousand kilometers away on the orbit of an Earth satellite—But it was different for these two girls.

The mini-wyverns encircling Princess Yukikaze had reduced in number from forty thousand to less than a thousand five hundred.

For this large group, the two girls who had conducted the birth ritual were their mothers.

This was a magical bond that rivaled that between lord and vassal.

Precisely because of that, the mini-wyverns could share their sensory data with the girls.

Just earlier, Princess Yukikaze had been wounded grievously in a distant battlefield. However, the princess' human form had separated from the dragon body to attack the Crimson Queen that was hiding in satellite orbit.

Then she had used some kind of magic—

This caused the powerful Crimson Queen to start collapsing.

The ruby-like dragon scales lost color, turning into what looked like century-old weathered brick. The gigantic body began to flake and fall apart.

The body seemed like it could no longer sustain its form, having lost its source of magical power.

Sooner or later, it would crumble completely, weathered.

In human form, the princess witnessed with satisfaction the red dragon's demise, riding her magic surfboard to soar again. Her destination was the white dragon body floating in space. She was planning to merge with her injured body again.

However, the two witches on the Moon were in no mood to pay attention to Princess Yukikaze.

"What happened to Haruomi...?"

Orihime called out to Asya in a completely unemotional voice.

With a hollow expression, and reluctance to face a vague realization of the truth causing the brain to shut down, she showed the back of her left hand to her witch companion to see.

"The Rune of the Bow—Haruga-kun's rune has disappeared..."

Asya had lost her soul link to Haruga Haruomi when she became a Tyrannos.

If this link remained, she would be able to have his emblem, the Rune of the Bow, manifest on the back of her left hand any time. Orihime should be able to do this too—

Asya used flight magic to fly into the sky.

She summoned her blue partner. Rushalka had been standing by, flying over the Rune of the Mother Dragon at the Plato crater.

This was the only chance to bury Princess Yukikaze and eliminate this threat forever. She and Rushalka had no chance of winning except by attacking the wounded princess.

Hence, Asya valiantly flew into the sky without any hesitation.

More importantly, this was a battle of revenge. She was to avenge Haruga Haruomi, who had lost to a dragon king.

The blue wyvern flew over, following her master who was flying towards Earth's satellite orbit—

As for the Crimson Queen...

It was gradually approaching the blue planet's ocean.

Drained of power, the Queen could not even overcome the Earth's gravity.

The shock and heat from crashing into the atmosphere was mercilessly obliterating the red dragon's body.

In the process of crashing to an altitude of ten thousand meters, the gigantic body became more and more severely damaged—

The Crimson Queen was now in the sky over the northern Pacific. She had lost her lower body, left arm, and most of her two wings.

Nevertheless, someone still succeeded in transporting her there.

"Glinda, I am counting on you again! Gravity Control!"

At the Hawaiian island of Kauai, on a beach near Kilauea. Luna and Glinda, the three-headed lion leviathan, were looking up together at the falling Crimson Queen.

From this vantage point, the Crimson Queen looked like a meteor crashing to the Earth's surface.

Catching the powerless Queen, pulling her towards the Earth's gravity—In fact, it was Luna Francois and her partner using pseudo-divinity, drawing the Queen on a trajectory leading to the Earth's surface, then applying force to bring her to Hawaii's immediate waters.

"I managed to bring her here at last..."

Since the Crimson Queen happened to fall into the sky over the northern Pacific equator, Luna was able to drag the Queen over forcibly. A little farther away and even the master-class witch might not have been able to accomplish such a feat.

Shirasaka Hazumi was on the shore too, while Minadzuki was standing by in the sky.

The two of them had removed their winter coats and changed into lighter wear, looking up at the stars dotting the night sky on this island of eternal summer.

The Rune of the Bow on the full moon had disappeared.

Same for the rune that was supposed to be manifested in the two witches' left hands. The implied significance left Hazumi in terror. Even so, Luna still issued orders.

This was gravity manipulation for deceleration.

Glinda's three heads, the lion, the goat, and the dragon all roared at the same time. The eruption of magical power sustained the gravity that was pulling and guiding the Queen.

After a few minutes, the moment arrived. 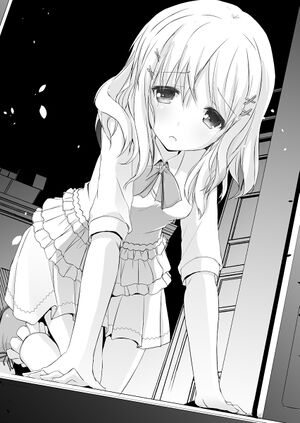 The giant dragon body of the former Crimson Queen landed on the sea at Kilauea like a landing craft that had used a parachute.

Ships, helicopters and ground units of the US Armed Forces were standing ready at the back to support them.

The two witches, one Japanese and one American, made the call to head over to the Queen's landing spot with the military and nodded to signal to them.

Luna and Hazumi had boarded a US Marine helicopter and flown to the sky directly over the Queen that was floating on the sea surface.

Normally, the Queen would have sunk into the water, but Glinda was supporting the body using pseudo-divinity.

However, Hazumi instantly gasped when she looked at the red dragon on the sea from the helicopter.

"This is one out of many possible outcomes, so naturally, I predicted it, but..."

The Crimson Queen was floating on the sea, face up.

Everything below the waist, the left arm and both wings were practically gone. The rest was all covered with wounds and missing bits and pieces. More seriously, the two open eyes showed no signs of life. One could not sense any consciousness or reason from them.

Deep in the Queen's left chest—The heartmetal had stopped beating.

No signs of movement, no magical power. The giant red body had turned into a corpse.

Hazumi collapsed on her knees, her head down, crying.

As for Luna Francois, she was a seasoned warrior despite her young age and had gone through similar farewells many times. However, she felt a certain liquid, one that she had never seen before until now, slide down from the corner of her eye. In that very instant—

Luna looked left and right, surveying the interior of the helicopter.

She perked her ears then stared at the sea surface—the Crimso Queen's remains—then placed her hand on the back of the softly sobbing junior witch.

"I am sorry, but it looks like we have a mission to complete."

"With the Earth's fate on the line, we must find something lost."

With great fortitude, Luna nodded at Hazumi whose face was wet from angel's tears.