From Baka-Tsuki
Jump to: navigation, search
This series was licensed by J-Novel Club on June 26, 2018. 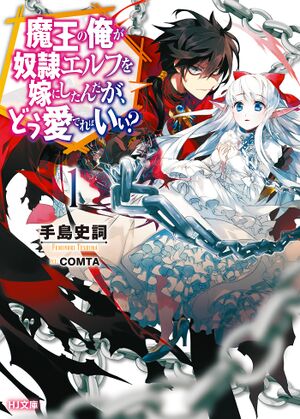 Maou no Ore ga Dorei Elf wo Yome ni Shitanda ga, Dou Medereba Ii? (I, a Demon Lord, Took a Slave Elf as my Wife, but how do I Love Her?/魔王の俺が奴隷エルフを嫁にしたんだが、どう愛でればいい?) is a Japanese light novel written by Fuminori Teshima (手島史詞), with illustrations by COMTA . The first volume was published on January 31, 2017, and the series is ongoing with 5 volumes released so far.

Zagan is feared as an evil mage, he is awkward and has a sharp tongue, and once again had to put down thieves that encroached on his territory when he was researching that morning. In a dark auction, he finds a white-haired slave elf, Nephie, who holds a peerless beauty. Falling in love with her at first sight, he uses his fortune to buy her, but as poor as he is socially, he doesn’t understand how to connect with her. Thus, the clumsy cohabitation of the mage that can’t convey his love, and the slave that pines for her master but doesn’t understand how to bring it up, begins.