-- Magic Among the Cherry Blossom --[edit]

Everywhere you looked, the mirrors opposed each other. A part of my shared heart called out to another. Because the cherry blossoms sway, and the flower petals fall. Had I recognized the signs sooner, I would have come even earlier.

Wondering what had happened, the students turned and looked back.

Shirayuki-san had been tying her sailor collar as she stepped on the cherry blossom petals and followed the small group of students. Some time along the way, a ten-meter gap had opened up between them.

"Did something catch your eye?"

"Nope" she replied to her classmates, when they turned their heads around to listen to her answer. Something had interested her, but she had no idea how to talk about it. So she had tried to go back there, even though she knew she probably wouldn't find an answer. As she was returning from morning prayer, just as she was exiting the church, it had felt like she was being called by someone, and she had stopped. That was all. But when she began looking around, she could not see anyone. There was only a cherry tree with a branch barely supporting a proudly growing cherry blossom.

"I wonder if she became intoxicated by the cherry blossoms?"

As the girls began shrilly laughing, Shirayuki-san laughed softly as well. Entranced by the cherry blossoms, huh. When she thought about it, it strangely fit her situation very well.

After she had returned to the second-year Plum Class classroom, Shirayuki couldn't help but think about the voice that had called out at her. As the day wore on, the tale that she had kept in her heart began to grow, until by the time it had become 4th period, she neither took notes nor opened her textbook, but simply thought about that voice. Had she been intoxicated, it would have worn off by now.

At lunch, Shirayuki bounced back to the place, moving as if she were in a hurry. Without confirming whether she had been invited by something or not, she could not go on any longer.

Shirayuki asked, as she came to the place where she had been called in the morning, and called back. And then.

As if there were an echo from the tree, a voice rang back. Shirayuki became dreamy and then began calling back.

After the voice had whispered "Here", she began looking around but, she found someone else. On the fat branch above her, she could see the face of a single girl, sitting. She was wearing a Lillian Uniform, but somewhere, it was different from Shirayuki's.

This time, it was the other girl who asked.

When their eyes met, she could not bring herself to stay silent.

Shirotae laughed happily. Her brown, straight hair was as long as the branch she sat upon. The color of her skin was so light, that it seemed as if the colors of her surroundings would bleed into her. No, it didn't just seem as if the colors bled in, they actually did. --- Magic. Instantly, Shirayuki knew. That girl was not something of this world. Because a normal human would not let the color of the Cherry Blossoms bleed into their skin. Shirayuki began to run.

From behind her, Shirayuki heard Shirotae's voice clearly. Maybe Shirotae herself didn't know what she was? If people had paid attention, no one would have known where she had come from or why she had come in, but they would have noticed her enter the classroom.

Perhaps in response to a feeling she had felt, a classmate of Shirayuki's closed the box of her lunchbox and ran to Shirayuki's side.

It was Momoyo-san. She always was very well versed in occult stuff like this.

"I'm not sure. Maybe it was some magic."

Because she had said it so plainly, it sounded as if it could not be believed, but still Momoya-san listened from beginning to end to the tale without laughing. "Hm. I see." She said, as she made sounds indicating that she was following the conversation. As I continued telling the tale, my heart slowly began returning to its normal pace.

"It's not as stupid as you think it is," said Shirayuki while looking at Momoyo-san, after having related the whole tale.

"Leaving an opening for a human. Weird"

"Do you think it's weird because you saw something like this before?"

"Do you really believe what I'm saying?"

"If I thought you were lying, I wouldn't have had any interest."

The friend answered with a somber face.

"You know, in the morning, all of us were in that spot, but only Shirayuki-san noticed it. Also, she went back a second time, and this time she herself was called out for? That's not a very good sign."

"And then, wouldn't that person say, "I'm sorry, here, let me give you something to help you clean the uniform" and then present you some compensation from her purse?"

"Exactly. Then she would say 'Take it' and you would probably say 'I can't'. Well anyway, whichever you pick, either way, you could tell that this person wasn't someone you had seen earlier in the city."

"I wonder what she had wanted to say?"

"Will she remember that she had been talking to you?"

"If she does remember, what will you say?"

"Since I don't know what she is, or what she wants, so I have no idea what I'd do. But I know I'd be careful."

"I wouldn't go back there. From what you told me, the girl had been sitting on the cherry branch, right? Maybe it was a personified spirit of the cherry blossom, or some sort of trapped soul in the tree, or something like that. If that had happened to me, I wouldn't have been able to move. If I were you, I'd stay away from the place, and end this now."

"But it's within school grounds. There's no way I can avoid her forever."

"But it's only while the cherry blossoms are blooming."

"You can. And if the girl calls out to you again, do not answer her. If she calls out several times and you ignore her, maybe she will think she mistook you for another person, and she won't bother you again. It's difficult but, I think it's the best way to protect yourself."

When Shirayuki nodded, she thought that she really would follow Momoya-san's advice. But after lunch, as fifth period and sixth period went by, she began to feel suffocated.

She could see the cherry blossom trees from the classroom window. It wasn't the same tree from earlier, but different trees. As the wind blew into the branches, the petals fell with an audible sigh of "Shirayuki."

Shirotae was calling her. The smile from when Shirotae had spoken her name aloud would not leave Shirayuki's mind.

"Because we still have to decide on what to use for the School Festival, we shall meet again in the classroom after after-school cleaning is finished."

The School Festival Action Committee raised their voices aloud. Because a decision had not been reached, no one was even allowed to go to their club activities, even though the festival was still half a year away. To outdo the other classes, this elite class would release a questionnaire of proposals for ideas for the festival.

As soon as the "yes" and "no"s stopped, each of the students went on to do their share of the cleaning. Shirayuki also left the classroom, with the wave of students leaving to clean. She had forgotten about her cleaning duty. Even then, her feet began moving on their own. She did not need to ask herself where she was going, because she knew there could be no other place but that one.

"Shirotae, did you call me?" As she stood in front of the cherry blossom tree and called out, the figure of Shirotae floated out from the tree's branch.

"I didn't. You were the one who called me, right Shirayuki?"

"While you were in class, you shook the branches and called me. Shirotae, Shirotae. So I came out here."

"Class? Did I leave class?" 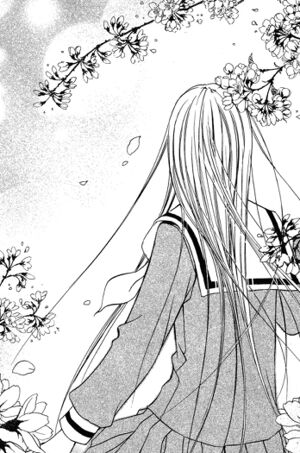 "Yes. Because this isn't a school."

Whether the apparition had taken away the school or not, Shirayuki had no idea. She could only laugh.

"I apologize. What are you laughing for?"

Because Shirayuki was so happy, she continued talking some more.

"So, which year and which class are you from, Shirotae?"

The magic that lived in the cherry blossom was called Cherry Blossom Class. Very cool.

"In my school, there is no Plum Class."

"Second-year Plum class Shirayuki-san. You are not of this world. That's why you look transparent."

"You're the transparent one."

"Well then, our versions of 'my world' seem to be different then."

"So is this cherry tree the limit then?"

Shirotae-san asked jokingly, but Shirayuki replied with a thoughtful "Maybe it is".

If one thought about reality realistically, it was a perfectly nice thing to say. If one believes that there is but one world, and that one exists in it, then it's not very sensible to think about other worlds.

It was simply a lie meant to confuse her. It was an easy conclusion, but.

"I'm magic even though I'm holding a Rosary?"

Shirotae placed her hands on her collar and lifted the rosary off her neck. She put it in plain view in her hands, then presented it to Shirayuki.

Both cried out at the same time.

It felt as if her whole body had been rammed with pain. A feverish pain came over her and paralyzed her, while at the same time, her mind went white. And for a moment, time stopped. In the next moment, a new shock came over her.

She realized that the sound she had heard was the sound of her body falling to the floor. The impact felt a bit weak, however, as she was soon able to figure out why. The cherry blossoms, which had fallen to the floor had acted as a cushion. She was covered in cherry blossom petals and dust, but she ignored them to look at her watch.

"Oh no, I'll be late for the school festival." As she began running, her indoor shoes hit something on the floor. It was the rosary, which had fallen earlier.

This was the rosary, which had fallen from the branch, she remembered. But she completely forgot about the other girl who had also been there. When she returned, Momoya-san stood angrily to greet her.

"You skipped cleaning duties huh? Where did you go? No, you couldn't have ..."

"Ah, that's good. You shouldn't go back to that cherry tree again."

"I know. I took Momoya-san's advice to heart."

Momoya-san began asking her again because Shirayuki's words felt suspicious, but then the School Festival Action Committee's announcements began booming over their speech.

"Oh, Shirotae-san, you're back? Now that everyone's here, let the meeting begin."

"But, this used to be Plum class."

Her classmates, thinking she referred to First Year Plum Class, began coldly laughing at her.

"For that matter, why is Cherry Blossom class only in the second year? Do you know?"

Shirotae bent her head in question as she laughed. With her finger, she picked up a cherry blossom petal that had fallen on her shoulder.

In the middle of the second-year Cherry Blossom Classroom.