She was late because of a Drama club meeting, but she still arrived earlier than the Yellow Rose sœurs in the Kendo club, and Shimako-san who had been called on to deal with something as a member of the Environmental Care Committee. She seemed relieved when she realized she wasn't actually late and dumped her bag on the ground, before doing a double-take when she spotted their guest.

"Pardon my intrusion," Katori-sensei smiled, and flashed the peace sign. This made her feel more like a classmate than a teacher.

Touko put on a big smile and greeted their guest, even though she didn't know why Katori-sensei was here. "Welcome."

Katori-sensei dragged the tissue with the cookies on it slightly towards Touko.

Touko didn't hold back, instead reaching out for one immediately. Followed by the pleasant sound of her softly munching on the cookie.

"Oh, they've got herbs in them. Did you make these, Katori-sensei?"

That was probably the obvious conclusion, since she had offered them.

Katori-sensei must have had some motive for suddenly offering them, and, for whatever reason, it looked like it was because she'd wanted to see Touko's reaction.

"A first year? Why'd she do that?" Touko asked, before taking another bite of her cookie.

"She brought them here because she wanted Rosa Chinensis to have them."

Katori-sensei said, as though laying down her trump card. Now, what will you do, Rosa Chinensis en bouton?

But, apparently, she wasn't concerned about the first year giving cookies to Rosa Chinensis.

"But we're in the middle of exams."

"That's what we call procrastination."

The former high-school student and current high-school teacher Katori-sensei knew full well that some girls would find themselves doing other things when they really should be studying.

Touko nodded, then started eating her second cookie. Watching this, Yumi looked at Katori-sensei with an "I told you so" expression. Touko wasn't the sort of petite sœur to be bothered by someone bringing treats to her onee-sama, no matter who they were, or what the intent was behind the gift.

"And?" Touko asked, looking at Yumi, after she'd finished eating her second cookie.

What was supposed to be added after the "and?" That was the question.

"What was the first year's name and class? Surely you would have asked her."

Touko repeated her words, like an accusation. Yumi's earlier "I told you so" expression was becoming less and less tenable.

"But you'll remember next time you see her?"

Was it really that important who had given her the cookies? Surely she wouldn't be thinking the girl had poisoned them? Or maybe she just wanted to check up on this girl that would give gifts to her onee-sama. No, she hadn't been this insistent in learning about the girls that had given Yumi chocolate on Valentine's Day. 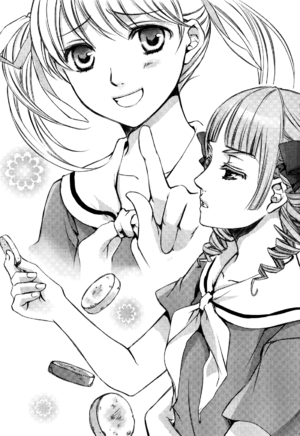 Touko let out a sigh. "I guess that's just how you are, onee-sama. I heard you didn't even remember Kanako-san after your first couple of meetings, even though she's so distinctive."

Huh, why are you bringing that up now, petite sœur? Although, what she'd said about her onee-sama was very much true.

"But I remembered you from our first meeting, Touko."

Because her first impression had been so terrible. Yumi didn't say this, but Touko must have figured it out, because she responded coldly.

"Well, thank you so very much for that."

Noriko-chan came back from the sink, where she'd been refilling the herb tea. Apparently unable to stand idly by and watch their sisterly bickering, she informed Touko, "I'd recognize her if I saw her again."

"You were there too, Noriko?"

"Well, I was the one that brought her here."

With that, Touko shifted her attack to Noriko-chan.

"If you were walking with her, why didn't you ask her name?"

"That wouldn't have been smart. The girl was so nervous she looked like she was about to cry, so I could hardly ask her to show me her student card, could I?"

"You wouldn't have to go that far. I'm just saying I'd like to know her name and class."

Then it fell to Katori-sensei, who had been happily watching this all play out, to ask the question that was on everyone's mind.

Why do you want to know? What would you do if you found out? Thump-thump.

Touko took a breath and then pointed at the herb cookies.

"These cookies are too good. I wanted to ask her for the recipe."

The strength drained from the three others—so that was it.

Well, it wasn't like she'd thought Touko was going to march to that girl's class and pick a fight with her, saying, "Don't be overly familiar with other people's onee-samas."