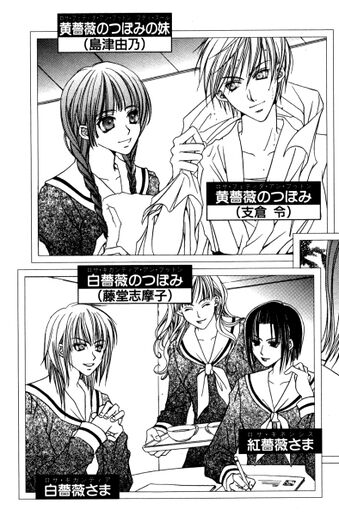 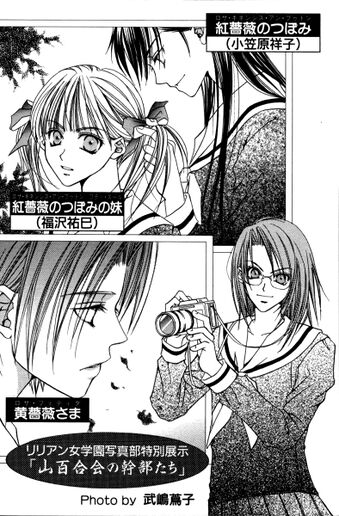 The clear morning greeting travels through the serene, blue sky.

Today, once again, the maidens that gather in the Virgin Mary's garden smile purely to one another as they pass under the tall gateway.

Wrapping their innocent bodies and souls is a deep-coloured school uniform.

Walking slowly as to not disturb the plaits in their skirts, so as to not toss their white sailor scarves into disarray... such is the standard of modesty here. Running because one is in danger of missing class, for instance, is too undignified a sight for students to wish upon themselves here.

Founded in Meiji 34, this academy was originally intended for the young women of nobility, and is now a Catholic academy of prestigious tradition. Placed in downtown Tokyo, where you can still see traces of Musashi Field's greenery, it is protected by God, a garden where maidens can receive tutelage from pre-school to university.

Time passes, and even now, in Heisei, three era-names past Meiji, it is a valuable academy, where nurtured ladies raised in greenhouses are shipped out in carefully packaged boxes after 18 years of schooling - an arrangement that continues to survive.

The new semester after the turn of the year.

The world's exam students placed a period at the end of their New Year's celebrations with a Nanakusagayu, and were preparing for the final stretch by tightening their headbands and grinding their studies out, but on the other end of the spectrum were the laid-back, relaxed maidens at Lillian Girls' Academy. There was no stressful mood in sight.

Aside from "gokigenyou" instead being "Happy New Years" during the commencement ceremonies for the new semester, life was as usual.

All because of Maria-sama's caring watch.

Thank you, heavenly mother, and please continue to watch over us- the sight of girls standing at the fork, in front of the Maria-sama statue, praying with their gloveless hands together looked as pure as ever.

Perhaps a particularly special prayer? One student had been standing there, praying for a long time. Standing slightly to the right side of the fence that surrounded Maria-sama, she stood there, a cool-looking girl with soft, neck-length black hair.

Already the fifth student that had arrived after her had stood by her side, prayed, and left, but hers didn't end. No one paid enough attention to see who was praying by their side, but even so, three minutes had elapsed.

Finally, when she opened her eyes, she looked up at Maria-sama with eyes filled with determination.