Reiri put it on her body, and turned speechless toward the whitely shining bright armor.

The next day after the core install to Reiri was finished, an experimental test of the magic armor was carried out at Nayuta Lab that had been relocated inside battleship Ataraxia. The one in attendance there was only Nayuta. Because Nayuta’s stamina was exhausted from creating the core, she was lying down powerlessly on a reclining chair. However, when she saw the figure of Reiri putting on Heart Hybrid Gear, her eyes immediately shined and she straightened up.

Nayuta put her hands together looking delighted. However the aforementioned Reiri was staring at her figure that was reflected on the mirror with cold sweat drenching her body.

Reiri’s trembling lips were finally able to wring out just those words. Reiri’s eyes were shaking, as though she wanted to escape from the reality that was thrust before her eyes.

「It really suited you.」

「No one want something like this to suit them!」

The Reiri’s exclusive(order made) Heart Hybrid Gear『Zecros』. It was a gem that Nayuta boasted of having performance that far surpassed other Heart Hybrid Gear. Currently, if they were talking about the strongest Gear, then Sylvia’s Taros would come to mind in regard of firepower and strength. Also, Gears that had been reinstalled, every single one of them was enlarged into a fantastic appearance, as though the gear was unable to restrain the fighting strength that was hidden inside. In that case then how large and how monstrous the form of her gear would be. Such thing was weighing Reiri’s mind no matter what since they finished the install yesterday.

However what was necessary was fighting strength for overwhelming enemy. Something like appearance didn’t matter. That was how Reiri was persuading herself.

But, even so it was on her mind.

She would unconsciously imagine herself clad in the strongest armor out of nowhere.

Even herself was shocked that she was looking forward to it that much. At the same time she also felt embarrassed. ‘Just what are you doing getting high spirited childishly like this, this is not something frivolous like that’, she repeated that inside her heart many times, but the imagination surfacing in her head couldn’t be stopped.

And then finally, her Heart Hybrid Gear, something that was just for her appeared before her eyes.

Seeing her own appearance wearing that strongest armor, Reiri whose eyes before this were shining in expectation like a little girl, now had a convulsing face.

Reiri was desperately searching for word to describe the gear that was created for her sake, but she couldn’t find anything inside her head that became pure white.

Zecros wasn’t large like she imagined, it was slim and minimized to the limit. She looked like she was wearing metal underwear that was barely there. Seeing at the whole, perhaps the exposure rate wasn’t that serious. But, her breast that was mostly laid bare with her nipple barely hidden. The skin from her cleavage until her navel and abdomen that was boldly exposed, made her think doubtfully if this was really an armor or not. Her lower body too, it looked like she was only wearing garter belt and a small sized pant.

Certainly there were a lot of other Heart Hybrid Gears with high exposure rate. However the design of pilot suit was taking part in a lot of those cases, if they felt like it then it was possible to alter it to some degree. But, this Heart Hybrid Gear was order made even until its pilot suit. Alteration was impossible.

「Why……is the exposure rate, this much……」

Nayuta frowned as though to say ‘what are you saying?’

She spoke like Queen Landred. Reiri glared at Nayuta, wondering if her thought process had been infected by Vatlantis.

The manufacturer of Zecros who was none other than her mother, Nayuta was making a delighted face that was in contrast with Reiri. It was the expression that looked like girl who was staring happily at her treasure.

「-……tha, that’s not what I’m saying. What I’m saying is, won’t the defensive power lowered remarkably like this?」

「No way. Life Saver is covering your whole body, so Reiri’s pearly skin won’t get even a single injury.」

Reiri felt her cheeks growing hot when she looked at Nayuta’s fond expression.

If a comparison was made with other Heart Hybrid Gear, especially if it was lined up with the magic armor of Vatlantis-made, then perhaps Zecros actually wasn’t that lewd. It wasn’t like Reiri didn’t feel that her sense was already getting strange, but she made herself accepted the situation like that. Although, it was hard for her to accept in the point that it was herself that was wearing it, but their talk wouldn’t progress if she didn’t shelve up this matter for the moment.

「The-, then, let’s just say that it’s okay……no! It’s not okay but, it can’t be helped, bu, but still……you see, that, about cuteness, or fashion……anyway just what’s with this design! Is this harassment!?」

Her arms and below her knees were wrapped with armor that looked like Gear, but she couldn’t comprehend what meaning there was in the frills that looked like feather attached here and there. The wings on her back too, it wasn’t something cool like other gear, but something small and cute like angel.

And what clinched it for her was the tiara on her head. It was shining silver with small graceful design, even at the center it was shaped into heart mark, looking lovely like something that would be put on the head of a fairy-tale princess.

「My, when you were a child, didn’t you like the TV show with a hero that was oriented for girl like this?」

「Tha, that is! I only liked that because its fight scene that defeated the enemy was cool!」

‘Shit-, even though she neglected me but she still grasped my action, that’s the most irritating thing from this woman!’ Reiri felt as though her stomach twisted, but such thinking didn’t matter after this late.

「I updated the figure of hero that you liked as child so that it suited the current you. I think that it really suited you but……you don’t like it?」

The mother with the appearance of a little girl tilted her head.

Nayuta’s expression made Reiri’s voice to get caught in her throat.

Just why are you making a disappointed face like that?

You who led the world by its nose, you who doesn’t think of human as human, you who think of all existences as target of research and observation, you who lack emotion, why are you making that kind of insecure face just from your daughter’s mood?

Reiri turned her back at Nayuta.

「……I am not pleased or displeased. I only need the strength to fight machine god. If this armor has that power……then this Zecros, is something priceless for me.」

Reiri couldn’t see Nayuta’s face. But, when she heard the lively voice after that, she could easily imagine her wide smile.

「Geez♪ If it’s pleased you then just say so honestly.」

Reiri whispered ‘sheesh’ inside her heart before turning around toward Nayuta.

「And, can we test its capability already?」

「Ufufu, I know you are happy with it, but don’t be in such a hurry. I’ll adjust it from now, so I’ll call Kei here first. Please wait a bit.」

Reiri crossed her arms and closed her eyes to calm herself――but those eyes opened wide so suddenly in an instant.

The loud voice that Reiri suddenly let out also made Nayuta created a shocked expression.

「What’s the matter, so suddenly?」

「Thi, this appearance, will be seen by Kei……by other people, is that what you say!?」

Nayuta stared at Reiri with a dubious face.

「Isn’t that obvious? How are you planning to fight if not like that?」

Reiri’s face turned bright red and she grinded her teeth.

It’s still better if it’s just kei. But, how can I show this appearance to Kizuna and the other little girls too!?

Reiri felt overwhelmed when she thought that.

As expected, the saying in the society that the clothes a mother bought was too embarrassing to wear was actually true. Reiri breathed a really, really long sigh. 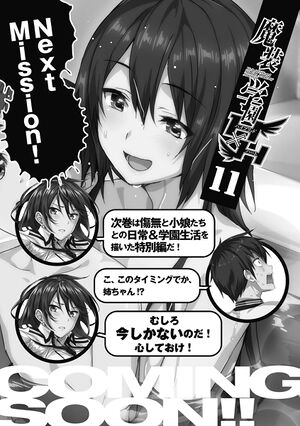 Reiri: Next will be special edition that told the daily life & school life of Kizuna and the little girls!

Kizuna: I, in this timing, Nee-chan!?

Reiri: Rather it could only be now! Be careful!