Nice to meet you, this is Kuji Masamune.

In the selection of the 18th Sneaker Big Prize <Autumn>, I received the excellence award of my work that was called [Soul Synchro Machine], and in this chance I finally debuted.

Please take care of me!

By the way this work, this lewd story was written by me who is pure and honestly innocent with all that I had, when I submitted it I toned down the ero component a little bit. Then in the briefing session for the first time after winning the prize,

“It’s quite lewd isn’t it? But, if it’s like this, then isn’t it fine to tamper with the setting a little bit more?”

Is what the supervisor O-san proposed.

“Eeh, lewd is it―? But, as expected, it will be embarrassing for more than this you know―”

“No, no, you just need to entwine it a little bit more skillful. With this content, it’s more interesting to insert some kind of scheme, rather, please write it right from the start.”

“But this is a light novel, so please don’t forget something like that okay?”

While being told that, if I was going to do it, then do it thoroughly.

If I think about it carefully, the eroticness of the anime and manga intended for the general public is really something isn’t it?

As I thought, it’s not good unless I do at least that much! Yosh.

――And then a month later. Full of confidence, I showed O-san the manuscript.

“I wrote it full of ero! Really ero-ero right!”

I got extremely scolded.

I feel really apologetic to O-san who I troubled really much. Nevertheless, he has guided me with much perseverance, I’m really filled with much gratitude.

Well then, for the last thanks.

Even though the mecha design is cool and stylish, they suited the beautiful girl so much, how magnificent! Kurogin-san.

And for Uesu Tetsuto-sensei who always give words that were wasted on this newcomer.

All the gentlemen involved in the selection of [Soul Synchro Machine] as the winning work. 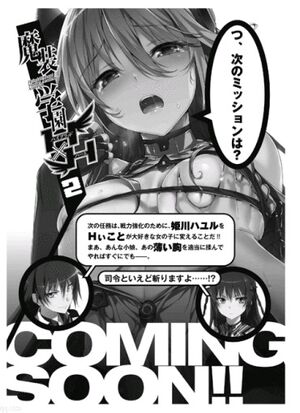 All of you who read this book. Really, thank you very much from the bottom of my heart.

The battle in the second volume will be more solid. And then Himekawa Hayuru is planned to have a great part. I will do my best from now on too!

Aine’s bubble: Wha, what is the next mission?

Reiri’s bubble: The next mission, for the sake of strengthening the battle strength, Himekawa Hayuru will be changed into a girl that loves lewd thing!! Well, that little girl, even with that small breast if it get rubbed properly then――,

Himekawa’s bubble: Even if you are the commander, I refuse you know……!?