This is Kuji Masamune! The comicalization has been decided! It will begin serialization from the eight month edition of [Compace] that will sell its monthly issue on 26 June. The drawer of the manga is Ayakawariku-sensei! I myself will also sketch the setting material and cooperate in various things. I’m really looking forward to the start of the serialization!

Well then, for the thanks. When I thought that the fourth volume is the best, this time the illustration is even more magnificent, Hisasi-san! And then Kurogin-san who did the mecha design. The editor in charge O-san from Sneaker editorial department. And then all of you readers who are always giving support. Really thank you very much!

The next sixth volume will have the story advance even more and more to the best part! Even while searching for each other, yet for the sake of their respective worlds Aine and Kizuna will clash! However, Aine’s Forbidden Armament [Code Breaker] will erase all Heart Hybrid Gear. In the end does Kizuna have any chance of victory!?

Furthermore, the plan for the [special edition that will be attached to the drama CD] is in progress! It’s still not formally decided, but depending on everyone’s support perhaps it will be realized.

[Masou Gakuen HxH] the sixth volume is arranged to be sold on this fall, look forward to it! 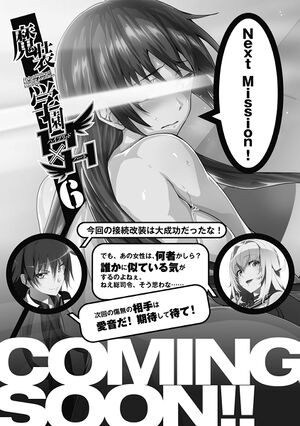 Reiri: The Heart Hybrid this time was a great success!

Yurishia: But, that woman, who is it I wonder? I got the feeling that she resembled someone though. Hey Commander, don’t you think……

Reiri: The next opponent for Kizuna will be Aine! Wait with anticipation!