This is Kuji Masamune! What do you think about the sixth volume of [Masou Gakuen HxH]? You haven’t read it? Then that’s also good! There will be no particular problem even if you are reading this afterword first before reading the story! I want you to read thinking this as the author’s talk without spoiler!

This sixth volume has the most passionate content among all the Masou Gakuen until now. There is also hot scene in temperature meaning, but as expected the center of attention is surely the confrontation of Kizuna and Aine. The nullification of Heart Hybrid Gear due to Code Breaker, in a certain meaning Aine’s Zeros is possessing an unrivaled ability, Kizuna is using all the strength he has to oppose against that. What is called as Kizuna’s strength is not just direct weapon. Intelligence and bravery, and then the power of his comrades. All of such things are Kizuna’s power.

Which reminds me, the first volume can also be said to be a story of Kizuna VS Aine in a certain meaning isn’t it? If this volume is thought as their rematch after going around and around, that’s also deeply emotional isn’t it? Even at the first volume’s first and last the two of them have grown and changed. And then, even in the first and sixth volume, I think they also accomplished a large change again.

Kizuna and also Aine are not completed people. They lost, worry, commit several mistakes, even so they are advancing forward without giving up. I earnestly wish everyone to watch over the growth of them who are like that from now on too.

And then the MVP this time, as expected is Gertrude! The moment she made her entrance at the third volume she retired from injury. And then she is a character with bad luck after going through two volumes continuously making her entrance as an injured person! Finally, she comes into the light of day! (cry)

In addition the AU tour is decisively acted, Amaterasu and Masters idol activity is even more polished……what will happen to these people from now on? Even I am also in suspense. No, seriously.

The one who is holding the key from now on is undoubtedly Nayuta. What is she thinking, what is she doing. Earth and also AU, the fate of everything is influenced based on that. And then. Regarding the feeling of Aine’s little sister Grace, where will she head? Will the secrets of the AU also going to be rapidly revealed at the next volume seven? Is my thinking.

Yes! Speaking of volume seven, about the [edition that is attached with a Drama CD] that I wrote at the afterword last time, it will be realized at the seventh volume! I’m the one writing the script this time too, actually the editing is also finished. Regarding the content……this time too naturally I recommend wearing headphones……let’s just say that! And then the theme that is really like Masou Gakuen HxH which I recommend to listen to using headphones, is done in the Drama CD this time. Look forward to it without fail!

Well then for the thanks. Hisasi-san is the best! And then the mecha designer Kurogin-san. The editor in charge from Sneaker editing department O-san. And then, all of you readers that are always, always supporting me. Really, thank you very much!

The planning for [Masou Gakuen HxH]’s anime is in progress. 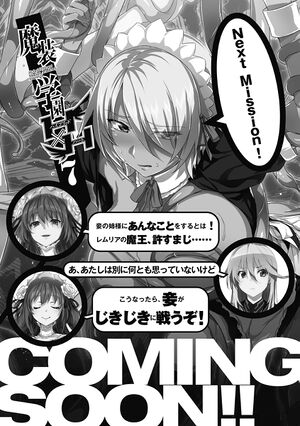 Aine: I, I’m not really minding anything about it though.

Grace: Now that it has come to this, I will personally go to fight!