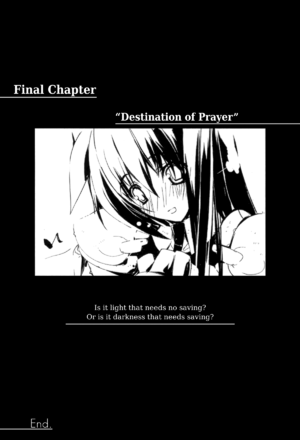 Is it light that needs no saving?

Or is it darkness that needs saving?

The ceiling was covered in darkness.

He seemed to be lying in some large space and his head rested on something.

He looked up and saw Shinjou looking down at him.

He heard many footsteps around him and could sense people coming and going.

“How long has it been since the battle ended in the sixth basement?”

“Well…about half an hour, I guess. There was a landslide outside and Heo, Harakawa-kun, Mikage-san, and Ryuuji-kun just said they would be returning here. Also…”

She faced forward, so he followed her gaze.

“Izumo and Kazami? Excellent work, both of you.”

“Yeah, well you need to get that left hand of yours healed right away. It looks like we’re going to have a lot of problems on our hands.”

Kazami smiled bitterly and he gave a bitter smile of his own.

“Why did you not shoot when I was fighting Hajji? You had an open line of fire, didn’t you?”

Shinjou seemed to have been wondering the same thing because she tilted her head. Kazami shrugged as she answered.

“I just figured you could manage on your own this time.”

She turned her back without saying anything more.

Izumo was still looking their way, but she grabbed his arm and forced him to turn around too.

The two of them left the large room and likely moved out into the moonlight.

…There is no helping that.

Sayama smiled bitterly and relaxed. He needed healing, but he wanted to get some sleep first.

“Where is Doctor Chao?”

“A bit ago, Diana-san…took the four brothers’ Concept Cores to her.”

Sayama noticed a slight tremor in her voice but said nothing.

He simply lay on his side so only she could see his face.

She took a hand from her chest and brushed up his bangs as he looked up at her.

“Shinjou-kun, I would like a lullaby as a reward for my efforts. …I am exhausted.”

She narrowed her eyes.

“When you wake up, I have a lot of surprising things to tell you.”

He had a general idea what that would be, but saying so to act clever would be no fun.

“I hope you really do surprise me, Shinjou-kun.”

He smiled and she did too. She then averted her gaze.

With an embarrassed look, she brushed a hand through his hair again and opened her mouth.

She then sang. Her voice trembled a bit at first, but it soon calmed.

Sayama knew the song. It was the hymn titled Silent Night.

Just the faithful and holy pair,

He listened to her singing voice and saw her exposed stomach next to his face.

Her well-shaped navel gently rose and fell with the rhythm of the song and her breathing.

He gained an odd sense of calm from seeing that movement and feeling her breathing and pulse through her lap.

Tempted by that scent, he tilted his head and placed his cheek and ear against her sweaty stomach.

“Ah,” she said and stiffened her lap, but he could now hear her breathing and pulse. It was a soft sound and he ended up matching his breathing to hers.

He smiled a little in his heart and placed his lips just below her navel.

He could taste her sweat.

It resembled salt water and he made it his as the proof that this precious person was still alive.

…What is going to happen to us? We defeated the Army, but that has left us with a major problem.

What was Team Leviathan supposed to do about Top-Gear, the other Gears, and the other UCATs?

But he did not speak those thoughts aloud. He was losing the strength needed to move his body.

His consciousness faded and, just before falling asleep, he realized the source of the relief he felt from the heat and rhythm of Shinjou’s body. It was a nostalgic thing he had difficulty remembering. It was…

He felt a slight pain in his chest as he remembered.

Long ago, his mother had held him and sang to him.

The pain in his chest grew and he curled up a bit.

Shinjou must have noticed his pain because she reached out and gently embraced him. She leaned over him as if to protect him.

Her words contained a hint of heat and he answered with a nod just as he closed his eyes.

Chao sat on a wooden bench and looked up at the fluorescent light on the ceiling.

She was in Okutama Station after the final train had already left.

She was alone in the small waiting area and the nighttime wind of late autumn blew in across the tiled floor.

But she turned to look at the vending machine shining brightly to the left of the bench.

She reached into her white coat’s inner pocket, pulled out a pack of cigarettes, and found only one cigarette left inside.

…Once I smoke this one, I guess I’ll head back to UCAT.

The Army had apparently attacked, but she knew just how useless she would be.

After all, she could not even move her body properly.

Her eyes were having difficulty focusing.

There was a simple reason for these physical defects. She may have extended her lifespan and stopped her aging, but…

“This is because I created those four in that area of distorted time in 7th-Gear.”

She had enjoyed that, but she had spent so much time there that not even her extended lifespan could keep up.

She wondered what had happened to those four she had created. Had they won or lost?

Either way, she knew they would have helped Team Leviathan.

She wondered if it had gone well.

…Did you enjoy yourselves?

…Do you hate me for creating you to die?

She kept her questions from showing on her face and she began to place the cigarette in her mouth.

But she dropped it.

The twisted cigarette fell on the bottom of her white coat that was spread out on the bench to her right.

Annoyed, she reached out to pick it up.

“Would you perhaps prefer this one?”

Someone held out a full pack of cigarettes with one sticking out.

She looked at the person who held out the cigarettes and wore a white coat.

She hid her slight surprise and asked where the others were.

“We are all here. Ikkou and Mitsuaki are right over there.”

She turned to the left and saw Ikkou and Mitsuaki in their combat outfits and trying to decide what to buy at the vending machine.

Yonkichi was in the back of the station building looking at the vacation pamphlets.

“Brothers! What about this Tohoku open-air hot spring!?”

Chao smiled bitterly at his question.

“You idiot,” she said. “Don’t you have something to do before going on vacation? What about Sayama and the others?”

“Testament. They should be very busy.”

She heard the answer, but she could no longer tell who it was who had spoken. Not that it matters, she thought.

…They probably will be busy dealing with the other Gears and the remnants of the Army.

She could not help them. But, she remembered.

…You were the same, weren’t you? Sayama, Thunderson, Ooshiro, and Kinugasa.

Those children can’t do anything to help us with our days of stupid fun.

This is the same. We had our fun back then and I’m sure those children will have their own fun now.

“How about we take a vacation?”

“Long ago, Professor Kinugasa took us on a vacation. That was before I made you four. …We went deep in the mountains near Mt. Ikoma in Kansai. Hiba fell from a cliff and Siegfried burned down our cabin with one of his spells.”

That was so much fun.

“We…don’t have to go on a vacation,” said Yonkichi. “We can if you want, but things are plenty fun as they are.”

“Is that so?” she answered with a reserved nod.

She only gave that small nod to the answer she had wanted to hear more than anything else, but then she spoke from her heart.

Was it the fluorescent light on the ceiling? Or…

Her lips mouthed something. She did not know who she was speaking to, she made no sound, and it only took the form of motion.

A small tremor ran through her body.

Her final heartbeat had sounded.

In the fluorescent light of Okutama Station’s waiting room, Diana stood behind a wooden bench.

Chao’s small and unmoving form sat in front of her.

A blue and a black sphere floated to Chao’s left and a red and a white one to her right.

Her right hand was still inside her white coat’s pocket.

Diana’s paper bird had sent the four spheres over to the woman just as she had reached into her pocket for a cigarette and stopped moving.

After that, Diana had left it all to the spheres and turned her back so as not to intrude.

Chao had stopped moving, but she seemed to be saying something.

Once that too came to an end, Diana turned to face her back again.

“We will now go do what we must, given the truth we know.”

Diana walked to Chao’s side.

She stirred up a gentle wind as she stood next to the woman, crouched down, and took her still-warm hand.

She helped the woman grasp the cigarette and put it in her mouth.

At that point, Diana noticed the slight smile formed by Chao’s closed eyes.

The woman gave a satisfied smile with the cigarette in her mouth.

Diana forced a slight smile of her own.

She heard rushing footsteps on a distant road.

They likely belonged to Team Leviathan and their comrades.

Diana wiped at the corners of her eyes as she listened to those footsteps.

She briefly hung her head before returning her twisted expression to her usual smile. 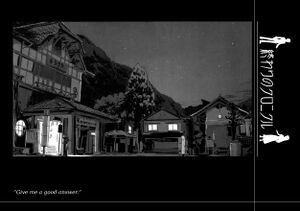 Diana looked up to the ceiling and spoke into the white light there.

“Give me a good answer.”