Chapter 26: A Frank Chat About Destruction[edit] 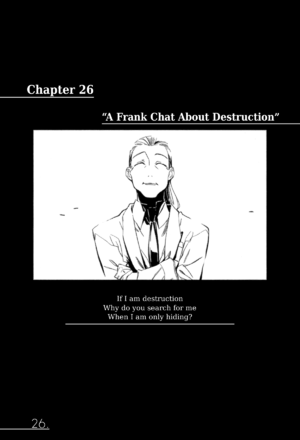 If I am destruction

Why do you search for me

When I am only hiding?

The house was surrounded by a fence and it was always busy since it doubled as lodgings for the day and night shift security guards.

However, Ryouko was a late riser. Or rather, morning for her began when someone came to wake her.

She was woken to be present for the switch between the day and night shifts, but according to her…

“Why are you always waking me up, Kouji!?”

While according to Kouji…

“Because you never wake up on your own!”

And if you asked Sayama…

“Ha ha ha. This world functions on a give-or-take basis. Just like Shinjou-kun and me.”

But today, Ryouko had woken on her own.

She opened her room’s sliding screen that bordered the central courtyard, yawned, and stepped out in her yukata.

She stood below the eaves to avoid the nearly midday sun and she gathered up her lowered hair in the chilly air.

The wall answered her with a male voice.

“He said he had some business to take care of.”

“Business? Does he have any other daily jobs than waking me up and cooking?”

She pulled a handgun from her pocket, pressed it to the wall, and gave the wall a sleepy smile.

She pushed down the hammer and the wall panicked.

The wall screamed and footsteps ran down the hallway.

Ryouko turned around just as Kouji slid on his socks and came to a stop.

Before she could greet him, he spoke clearly.

“C’mon, I’m a girl, so you need to smile and forgive a little bit of unreasonableness.”

“Girl?” asked the wall behind her.

She turned around and fired.

“Ah, sister! I only just had that plaster redone! Don’t shoot holes in it!”

“Th-there’s a hole on what’s inside, too!” shouted the wall.

“Well…” He briefly hesitated. “Shino-san has vanished. And for some reason, Pes was kneeling down in the yard.”

“Ehhh!? K-Kouji, did you do something perverted again!?”

“What!? You mean you’ve never done it at your age? You awful human being! You living falling birthrate policy!”

“That is not the issue here and quit twisting my words! And Li-san, just because you’re over forty is no reason to start crying inside the wall there.”

Kouji crossed his arms and looked at Ryouko who was lifting her hair with a hair pin in her mouth.

“You don’t seem too surprised,” he said. “Do you know where Shino-san is?”

“No one uses the word esper anymore, sister.”

“Sh-shut up. Stop giving me that look of pity. A-ny-way, if Shi-chan left, then that’s fine.”

She stuck the hair pin in her hair.

“It was her decision, right? She isn’t a child anymore, so she had to have a good reason to leave and we would be insulting her resolve if we found her and dragged her back.”

“What if she left because she wanted us to find her?”

“When the injured or sick leave, it’s because they don’t want to be a burden, just like with an old cat. …If the one they’re a burden on approaches, they’ll just run away.”

“There is no ‘then’.” Ryouko gave Kouji a confused look. “Shi-chan can run away if she wants. And if she tries to return, then we really have to take care of her. That would mean this is her only option even though she doesn’t like it.”

She waved a hand to shoo her brother away.

She fired thrice into the wall to drive away the people inside.

She was now alone.

She breathed in the chilly air and suddenly looked up into the sky.

With her gaze on the blue winter sky, she placed her hands on her hips.

“After I change, I think I’ll go for a walk outside.”

2nd-Gear’s Tsukuyomi asked a question below the library’s light.

She crossed her arms in her lab coat as if trying to defend herself.

“When our Gear was on the verge of destruction, it seems the Low-Gear engineer who should have saved it took too long to make up his mind.”

She spoke plainly and Sayama nodded and crossed his arms as well.

“That is true and I believe we went over all this during the Leviathan Road. Are you digging it back up?”

“Of course not,” she began with a shrug. “There is one thing I want to ask for the sake of the coming new world.”

The witch sitting next to her wrote what she said in glowing words:

“If Low-Gear is faced with the same situation, what would it do?”

“Yes, if the destruction of the world were approaching at overwhelming speed, how would you handle it?”

A pause followed her question.

During that wordless and still pause, the only sounds came from the stenographers, but Tsukuyomi herself finally broke it.

“If you wish to support the world, you must be able to ensure the world will not be destroyed no matter what happens. Surely you aren’t going to tell me you hadn’t given it any thought.”

“To be honest, I hadn’t thought about that at all.”

And that was why everyone’s focus turned from her and to him.

With all eyes on him, the boy spread his arms, breathed in, and stared directly at Tsukuyomi.

“Tsukuyomi-kun, you are talking about what we should do when faced with the destruction of the world, but I have a question.”

He held up his left index finger and everyone focused on that single point.

“By any chance, do you happen to know how the world will be destroyed?”

Of course she did not. That was why she had asked what Low-Gear would do. But…

“Not a single person knows, so I have no way of answering your question.”

Sayama peered at her and thought for a moment.

“But you are a worrier, aren’t you? You think the world might very well be destroyed. So…”

He spread his arms again.

“I have a suggestion. If, after this meeting has ended, Low-Gear has been forgiven and allowed to exist, I would like to create a Destruction Information and Countermeasures Research Team.”

“Yes.” Sayama raised his arms. “Or the DIC Research Team for short!!”

Tsukuyomi reflexively protested Sayama’s abbreviation, but then she frantically looked around.

“Ah!? See! Now that awful term is part of the entire world’s history!”

“Wh-what are you talking about, Tsukuyomi-kun? I merely abbreviated it to DIC! Nothing could be as grand as DIC! DIC is what you call a youthful power! What in the world could be wrong with DIC!?” 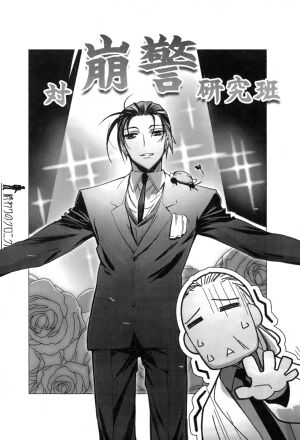 “Stop saying that!! I demand you propose a better name!”

Tsukuyomi collapsed backwards, but Miyako cackled next to her.

“What? You got a problem with DIC? Then go to Ueno and have it cut down to size!”

Tsukuyomi glared at her daughter, but #8 ignored them and spoke.

“Sayama-sama, I believe everyone knows what you are trying to say, so why not leave it at that?”

“Yes, I was getting the same feeling.”

He nodded and turned back toward Tsukuyomi.

She had stopped crossing her arms and had her hands in her lab coat’s pockets instead.

He stuck his hands in his suit pockets to match.

“Well, you get the idea, Tsukuyomi-kun. All we can do is set up an antenna to detect any possible destruction and, in an emergency, gather the humans of every Gear… no.”

“Gather the residents of what will then be a single Gear and do everything we can do without giving up. At the very least, I can promise the people of Japanese UCAT will not give up.”

“So you’re telling us from 2nd-Gear not to foolishly lose our home for a second time?”

“And to that end, how about you record your history here? Your long history can double as a lesson from the past.”

Tsukuyomi’s question was immediately followed by Sayama looking up at the unseen sky and opening his mouth.

“The wind carries names, techniques, and a heart that never forgets itself. And that wind blows in the direction you are facing. No matter how often it moves, it will never vanish. And I believe passing on your history is the job of the one with the name of the moon. Also…”

“We can make more history now, can we not? Tsukuyomi-kun, the history of the past is finite, but the future is – annoyingly enough – infinite. So if you record your history here, that lesson from the past will protect both the present and the future that we will be creating from now on.”

He placed his hands on his desk and leaned forward, but breathed in to cool down his lungs.

“Looking back to the lessons of the past will help prevent the destruction of the world. So… Yes, if you wish to pass on 2nd-Gear’s history, then get to work. We will prepare as much personnel as you need. Everyone has far too much time on their hands anyway.”

He then shouted to the Gear representatives sitting in the darkness.

“The same goes for the other Gears. If you wish to record your history and your world, then bring it on! But…once you finish, join us in this world! The history to come will be much, much longer! After all…”

As he continued, Tsukuyomi dropped exhausted into her seat.

“After all, every Gear will work together against the destruction to ensure we can continue on! And I appoint 2nd-Gear’s development department as the leader of that alliance. Use as much money and personnel as you like. The continuation of the world and of history is on the line!”

Tsukuyomi raised both hands in resignation.

“Fine, fine,” she muttered in exasperation. “Honestly, you cause nothing but trouble.”

As soon as Tsukuyomi sat down, someone else stood up and light washed over them.

However, Miyako was still seated at the desk of 3rd-Gear’s representative.

“Gyes-kun, are you the representative?”

Gyes nodded and looked to the boy directly ahead of her.

“This is an important time for Lady Miyako. We cannot have her standing for too long.”

“I see. Then you will be saying what you have to say, will you?”

The question-and-answer session with the next Gear began.

Everything seemed to click into place as the questions and suggestions continued smoothly.