Chapter 28: There and Not There[edit] 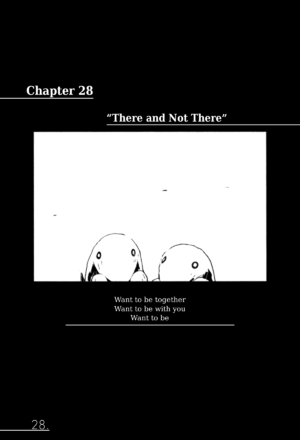 Want to be together

Want to be with you

Kazami descended to the bottom of the Kinugasa Library and continued forward.

In the dim light, she noticed how different the library looked without all the bookshelves.

Hajji shouted from the darkness behind her.

She did not even need to turn around as his powerful voice reached her.

She had already predicted this and Sf nodded her way.

“Self-proclaimed assistant negotiator, please state your reason for this request.”

She had expected this question, so she looked ahead and just a bit up to the moderator’s seat.

“If Sayama is the negotiator because he is Low-Gear’s representative, then is there any reason why I can’t negotiate as the other Low-Gear representative?”

She closed her eyes, opened her mouth, and shouted into the floor so it would bounce back to the darkness behind her.

“State your reason for denying my request!!”

She breathed in through her nose and then faced forward once more.

Two plant creatures stood with their front legs on the edge of Sayama’s desk.

She crouched down to put herself on the same level as them and they tilted their heads.

The one creature nodded and slowly continued.

“English? Did Heo teach you that!?”

Her shout received a response from the darkness behind her.

“Hm. I see. That’s a relief. …So that means it’s what you actually think?”

Heo shrieked and a new voice came from the darkness to her right.

“Colonel, colonel! I believe Miss Heo was at fault this time! Lowering your right hand would be the tolerant thing to do!”

This has gotten dangerous, sighed Kazami.

She ignored all the eyes focused on her and saw the plant creatures looking at her.

“You want to know why you’re bullying Sayama when you’re supposedly with him, right?”

The 4th-Gear creatures shouted in agreement, left the desk, and approached her. When she saw them looking up at her, she did her best to maintain a composed expression.

…Nwah! I want to take them home with me! And they refresh your exhaustion, too!

She forced down those thoughts and spoke.

It all comes down to this, she thought.

“Listen. There is no contradiction.”

Both 4th-Gear creatures tilted their heads in front of Kazami.

She knew the gist of what she had to say.

“The thing is, Sayama isn’t with you yet.”

Sound reached her from the surrounding darkness. It was a questioning sound taking the form of countless people uttering “eh?”

She knew why. During the Leviathan Road with 4th-Gear, 4th had decided to go with Sayama and Shinjou. They were the same, so they went with them.

But Kazami had overturned that assumption and she was not done there.

“Do you get it? Low-Gear hasn’t come to join you yet.”

She did not immediately receive a response.

The two plant creatures first leaned up against each other and then pulled back away from her.

They aren’t making this easy, are they? thought Kazami while mentally taken aback.

However, that would not resolve this situation, so…

“It’s simple. You have gone to be with Sayama, but Sayama has yet to come be with you. You lost your world, remember?”

The two creatures looked up at the ceiling for about three seconds.

“Yes, yes. That’s right. You moved to a new world. …And you know what? Sayama’s grandfather and his friends had everyone here move too. But unlike all of them, Sayama hasn’t moved, has he?”

The plant creatures thought on that for a moment.

“Then Sayama isn’t the same as you yet, is he? You moved here, so you’re with Sayama, but he was already here and hasn’t moved.”

After making three “it’s going to” phrases in her heart, she continued speaking.

“And you know what else? Bullying Sayama here is instead of having him move to this world.”

“When you moved, your world disappeared, right? That’s because your world was bullied. That means this world needs to be bullied, too.”

“Bullying makes Low-Gear and other Gears the same?”

“Yes. All the other Gears were bullied when they moved, so Low-Gear has to be bullied and move. But if Low-Gear disappeared, we couldn’t be together, so Sayama is being bullied instead.”

Kazami saw the creatures rise up and look at her from either side.

…Nwaaah! I want to grab one in each arm and take them home!

She resisted the urge and spoke to the two plant creatures.

“Sayama won’t disappear even when he’s bullied. Because he’s a pervert. That’s why Sayama is being bullied instead of the world, which would disappear.”

Kazami finally looked away, past the desk, and to Sayama.

The plant creatures looked that way too and the boy in a suit placed a hand on his chin.

His sharp eyes looked her in the eye, he gave a quick nod, and he thrust his arms out to either side for some reason.

“Yes. I am pummeled day and night by Shinjou-kun’s many terms of affection, yet I have not given in. What more proof do you need that I can easily endure ten or twenty times the bullying that would destroy a world!?”

“Extremely!! She refuses to be honest with herself!!”

His announcement was followed by footsteps rushing toward the library entrance behind him.

Her shouting voice was promptly dragged outside.

What was she hoping to accomplish? wondered Kazami as the plant creatures tilted their heads in her direction.

“Yes, with ease. With utmost ease.”

Kazami took a breath and stood up. The 4th-Gear creatures looked up at the movement of air she caused.

She then looked them both in the eye.

“So listen. Bullying Sayama will allow him to come be with you, so you mustn’t prevent anyone else from bullying him.”

“All the worlds here. So 4th-Gear with the worlds.”

“Everything still here because Sayama here?”

“Yes,” said Kazami. “Because you’re here, because everyone is here, and because we are all trying to be together, the world will not be lost.”

“The same? Everyone the same as Sayama? Pervert?”

However, the 4th-Gear creatures looked to Sayama again.

And they looked around.

That shout produced a sound from their surroundings.

In the unlit darkness, Kazami saw everyone in the audience seats and representative seats stand up at once.

They all immediately gave a bow or otherwise indicated their respect for the plant creatures.

As soon as they finished, they sat down and calm noisily returned.

The brief sound and motion had all been in the darkness, so it almost felt like an illusion or a momentary dream.

However, Kazami let out a breath, looked to the creatures at her feet, and faced the representative seats.

“Tell everyone thank you. …Now, let’s get going.”

The creatures lined up, looked up at her, and seemed to nod.

A shriek came from the representative seats and Sayama cleared his throat before speaking.

“Next is Heo-kun for 5th-Gear, so please try to remain quiet.”

“How about you thank me first? If you were in need of some help, I’d like to hear some appreciation. And if you didn’t need any help, then I successfully managed to steal your negotiation thunder. …Which would you prefer?”

“How about I say you should mind your own business next time?”

She did not turn around, but the bitter smile she heard in his voice was enough to satisfy her.

…That underclassman needs to be more honest.

She gave a bitter smile of her own and started toward the representative seats with the 4th-Gear creatures.

Heo reflexively stood when she was called.

Um… she muttered in her heart before realizing something.

She had prepared a lot to say, but she was not yet mentally prepared.

She had been so impressed by Kazami’s discussion with the plant creatures that this had caught her by surprise.

She was not sure what to do.

She suddenly realized her mind was completely blank.

The light was shining on her, but there were a lot of figures visible in the shadows and their eyes reflected the light back toward her. She started by opening her mouth to say something.

But only a tense breath escaped.

That was when she finally realized something.

She forced her voice out, but that was all that left her throat.

It surprised her to realize she had stage fright.

She felt her pulse begin to race and looked stiffly around.

But she could not see very well due to the tears that welled up in her eyes for some reason and she became even less sure what to do, but she knew she could not just stand here silently.

She tried to cling to Harakawa who sat next to her, but that was exactly when something tore through her body.

It came from directly in front of her.

Sayama’s unexpected shout made her jump and the tears scattered from her eyes.

Her stiffness crumbled and became a tremor.

Her voice leaked out and all strength left her body as if showing how defenseless she was.

Then everyone focused on her.

Their eyes all turned her way.

Her fear and the lack of the tension she needed to fight it caused Heo to seek power instead.

She let out a great cry that began with an “n”.

A moment later, Thunder Fellow appeared in the Kinugasa Library.