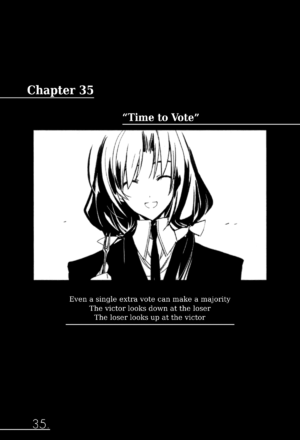 Even a single extra vote can make a majority

The victor looks down at the loser

The loser looks up at the victor

The recess began and the people in the library thinned out.

The Messengers of Wanambi and the plant creatures remained in the representative seats and looked at each other, but the other representatives had all gone to their respective waiting rooms.

The audience seats were similarly empty.

However, a few people sat in the audience seats near the moderator’s seat.

One was a gray-haired man who sat perfectly still, another was an automaton who had moved to the seat next to him, and the third…

“Why are you here, German witch? You still have ten hours until the Witches’ Sabbath.”

“Oh, is there a narrow crossroads with a view of the sky somewhere in this school?”

The witch in a black suit laughed quietly, sat on the desk next to Itaru, and looked to the automaton on his other side.

“You did well, Sf. Especially when you shot UCAT Director Ooshiro.”

“Tes. He ran off in a quadrupedal style afterwards, but where did he go?”

“My old man…well, he sometimes needs to immerse himself in his feelings a bit. He’s probably on the roof with his arms around his knees, remembering old times, and building a plastic model or something. …He’ll need to be subdued later.”

“It sounds like he does a lot of other things while immersing himself in his feelings.”

“He does,” agreed Itaru. “Anything happening outside?”

“It seems a mechanical dragon arrived at Japanese UCAT. …And it was carrying 3rd-Gear’s Concept Core.”

“I suppose that’s to show they aren’t threatening 3rd-Gear during the coming trial and vote.”

“Oh? To ask about your feelings of course.”

Next to Itaru, Sf all of a sudden swung up her right arm with a handgun in her grasp.

She trailed off because a balled up piece of paper was stuck in the gun’s muzzle.

Diana looked at the paper with “stopper” written on it and then looked up at Sf’s face.

“Sf, you are an excellent automaton. You are so excellent that you would help your master even if he said he wanted to die.”

“Tes. I was made to be excellent, so I am – on average – constantly excellent.”

“That is why I just asked about something you have to have done poorly. Do you understand?”

After a pause, Sf shook her head.

“I do not. As an automaton, I cannot possibly understand, Diana-sama.”

“Tes. I have no emotions. My master experiences emotions in my stead. So if someone else asks my master a question which disturbs his emotions, I will be acting based on disturbed emotions.”

“I’m so grateful for that egoism I think I’m going to cry.”

“Tes. But that is too long a description, Itaru-sama, so why not abbreviate it to ‘grateful ego’?”

“While you’re at it, wouldn’t ‘crying ego’ be cuter?” asked Diana.

After a few seconds of thought, Sf nodded.

“We can compromise and draw from a different part of the description for ‘going ego’.”

“Then why not ‘thinking ego’? I think that sounds nice.”

“Why are you two having a comedy routine over my head?”

Diana smiled bitterly and got down from the desk.

She then turned around and began to leave, but Itaru called out to her.

“What is it?” she asked over her shoulder.

“Did you know?” he asked quietly.

“That’s right,” he spoke into the empty air. “It’s best not to ask about the past.”

An Arab man in white sat in the center of the mostly empty room.

“Apologizing is not going to change anything, father.”

Mikoku answered from the windowsill. A large white dog sat at her feet and she used a fork to cut a piece of the cake that had been given out for the afternoon recess.

“Tatsumi and I are from Top-Gear, but you actually know more than us what Top-Gear was like back then. And…”

She looked to Hajji who was stretched out in his chair.

“Did you actually know the truth about Top-Gear’s destruction?”

“Why? Why would you think that? I’m the one that assumed everything was Low-Gear’s fault and got you all involved as I did all sorts of evil things.”

“But you would not let us inside during the attack on UCAT and you did not try to contact us after you were captured. And earlier, you set your personal grudges aside and spoke without letting us say anything. …It almost seemed like you were refusing to let us do anything wrong while making it look like you had forced us to obey your misguided actions.”

“You’re reading too much into this, Mikoku. Doing that would only harm Top-Gear, wouldn’t it?”

Hajji briefly fell silent, but he finally shook his head.

“You are reading too much into this, Mikoku. Yes. And…we will see the result once everyone votes. We will see which is right: reason or emotion.”

Mikoku took a bite of the cake, suddenly stopped speaking, and stared at the cake.

“These are whole strawberries inside! Talk about luxury!!”

“Has your character changed while I was gone? Hm?”

“Has it?” she asked before smiling a bit. “Maybe it has. A lot has happened lately.”

She cut the cake to leave the back portion behind and looked around.

Hajji and even Tatsumi, who sat at another desk, were looking at her oddly, so she frowned.

“Is it that wrong to leave the part with lots of icing for last?”

Tatsumi and Hajji exchanged a glance.

“You sure are sociable.”

“What kind of assessment is that?”

Mikoku did not really understand what they thought of her, but one thing was clear.

“Well, at any rate, it feels like a great burden has been lifted.”

“Yes. Like I said, a lot has happened. And a lot more happened today.”

She then spoke more quietly.

“But now I can believe that things are moving toward an answer…oddly enough.”

She placed the last bit of cake on her fork.

“So thank you, father. If you had not set yourself up as Low-Gear’s enemy on the night of our attack…no, since even before that, I doubt they would have gone this far to find the answer.”

“Are you sure you want to thank me? My unnecessary actions have lowered Top-Gear’s standing.”

“That’s fine. Knowing that Babel is Noah is useful for those of us who are familiar with Noah.”

Mikoku smiled and looked down at the dog looking up at her.

“You acted as our shield and now both sides understand each other. And now that we do…do you really think Top-Gear is going to lose this trial and vote?”

Hearing those last words, Hajji looked up at the ceiling and placed a hand on his chin.

“This did not start here. You have a guess how everyone will vote, don’t you?”

Mikoku got down from the windowsill, nodded to Tatsumi, and opened her smiling mouth while looking straight forward.

“Personally, I think the result is sure to be interesting.”

Another classroom was much fuller.

A boy in a suit sat at the center of the mostly filled space and others in school uniforms and white armored uniforms surrounded him.

However, there were no smiles or joy in their voices or on their faces.

They were all crossing their arms and placing hands on their chins in their circle of chairs.

“Okay, next question. What do giraffes, hippos, and elephants have that dolphins do not.”

“S-something that trivial and direct doesn’t count as a quiz!!”

Next to them, Shinjou typed on her laptop and spoke to Sayama.

“Should we really be doing this?”

“I think this is the best way to relax our nerves while maintaining the necessary tension. That is why you are typing right now, isn’t it?”

“Yes,” she agreed, feeling a little apologetic and lowering the laptop screen. “I’m making a lot of progress with my novel.”

“How far have you gotten in the last month and a half?”

“It’s almost all done. It’s my first time, so it’s rough, done completely on momentum, forceful, and done my own way…” She nodded. “And I’m not talking about something dirty.”

“Heh heh heh. Shinjou-kun, your sensors have taken you in an odd direction.”

At that point, Kazami turned toward them, having finished braiding Heo’s hair.

“Is the vote going to go okay?”

Ooki was the one to answer. She smiled and nodded with red circles drawn on her cheeks.

“Looking at the number of votes, we should win quite easily. For one, we pretty much get four free votes from 4th-Gear and 8th-Gear.”

The others exchanged a glance and began counting on their fingers.

“1st-Gear is Brunhild and her cat. They should both go with us, right?”

“2nd-Gear is Director Tsukuyomi and Kashima-san, so those will go to us, too.”

“4th and 8th were already mentioned.”

“5th-Gear is Heo and Thunder Fellow, so it’s two votes for us.”

“7th-Gear is the four ball brothers, right? I assume they’ll choose us, but how many votes is that?”

“They get two people to vote, so it must be two balls per person! Y’know, like with guys!”

Everyone averted their gaze from Hiba.

Sibyl sighed while still looking away, but then turned back and folded down her fingers.

“If we count up all of those votes…”

“Y-you’re a new one, but you’re also the worst one, Sibyl-san!! How can you completely ignore me!?”

“Then I will only somewhat ignore you. Will that do? …Anyway, um, 10th only has Jord, so all twelve Gears will cast a total of twenty-three votes. Of those, we should get both votes of 1st through 8th for sixteen votes. With Low-Gear’s two added in, that is a total of eighteen. We will easily earn a majority.”

Kazami checked by counting on her fingers. After doing so about three times, she shifted in her seat as if lying down a bit.

“What an odd expression of joy and relief.”

Sayama smiled bitterly and suddenly grabbed a paper napkin from the desk behind him.

Everyone watched in confusion, but he did not immediately respond and instead wrote something on the napkin.

He wrote a series of numbers and Shinjou tilted her head.

“This is a battlefield of reason and emotion and these are the numbers that describe it.”

“I will now write my predictions for the vote. And Kazami, I have one order for you.”

Kazami frantically sat back up and pointed at herself.

He thrust the napkin and its series of numbers toward her surprised expression.

“Let us go find the answer. …An answer void of hesitation.”

“This is how I see this clash of reason and emotion ending. And for that, there is something I want you to do. Trust in my decision. …This trial and vote can be called the Leviathan Court and this is how I want it to go.”

At that point, the door opened and a maid walked in. Her hair was gray and her maid uniform black.

“I am Moderator Sf.”

She looked across them all, confirmed that the people she needed were there, and held up something.

It was a cardboard box apparently made by Diana and they all looked at the words written on it.

I would expect no less of the German UCAT inspector. I have determined she has a decent sense of humor.”

“Now, representatives, please place your pure ballots in here for the sake of tomorrow.”