Sorry, I only just finished proofreading, so I’m a little excited. For those who are here for the first time: welcome. For those military commanders who are saying “First time? More like my second or third time. Mwa ha ha!”: go sit down over there and stick out your head. For everyone else: Nothing has changed here. Welcome back.

When you get down to it, I’ve been writing the City series for the entire six years since I won the Dengeki Game Novel Prize, but now I have my first new series (does that make any sense?).

This time, I suppose you could call it a fairy tale taking place in modern times. Some of the geographic issues and a few of the phenomena are completely fictional, so please be understanding.

Anyway, I have the plot complete up to the very end, so I hope it will live up to your expectations as much as possible. Of course, hoping is easy, so I can hope for anything I want (ha ha).

Anyway, 2005 is 60 years after World War Two. I first thought up this story during the 80s and I initially thought of it as the story of two generations: a parent and child. However, this really isn’t the era for that kind of story…

I looked into a lot of things and found out my grandfather on my mother’s side worked building battleships at Nittetsu’s Akashi factory which was almost hit in an air-raid. Whenever you come across stories like that it makes history feel so close by.

At any rate, I had a bit of a chat with a friend while looking into that kind of thing.

“Hey, so what did you think of my new series?”

“Well, let’s see… I thought there was a rule saying your heroines had to be blonde with huge breasts.”

“What kind of rule is that, you Titty Prefecture resident? And is that really your first comment?”

“But it’s always been that way. Just take a look at your criminal record. Out of 15 novels, the blonde rate was 11/15 and the obviously huge breast rate was 4/15. That’s a total batting average of 5.00. Not even major leaguers are that high.”

“Your Honor! I believe there is sophistry in that calculation! May I call him a rotten bastard!?”

“Quiet down. I am justice. Too bad for you.”

“Bear with it. Anyway, you went with a black-haired heroine this time, hm? It looks like the accused is showing remorse for his past deeds. As such, I judge you innocent and sentence you to death.”

“You’re horrible. And are we really going with this from the very first afterword of the new series?”

“Don’t worry about it. More importantly, how have you been lately? Have you been chasing after any cats?”

“No. I’m not ‘I’, so I don’t chase after them. A black cat comes and goes from the yard of a half-deserted house in my neighborhood. It seems to be someone’s pet, but I recently learned that there are two of them. When I approach, one rolls over to show me its belly and the other hisses at me. It’s an obvious example of seduction versus anger.”

“Sounds like twin sisters from some sort of game. The standard method is to have the hissing girl not actually hate you either.”

“For not actually hating me, the look in that cat’s eyes sure was serious.”

“Did you mix a lot of jokes into that?”

“Don’t worry about it. Anyway, according to the Divine States-World Interaction Theory, the area around my family home is Morocco.”

“Oh, what’s wrong with Morocco? Don’t worry about being in Morocco. From now on, I’ll call you Morocco. And how about I add ‘detective’ to that? Hm? What do you think, Detective Morocco? I can call you Moroc for short.” 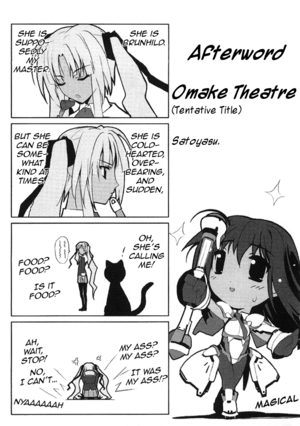 “You will definitely die in some horrible way.”

I would say the same about him, but what do you think?

Well, it should be something like this every time, so you can look forward to that.

I just finished proofreading while listening to the background music I used while writing this novel. Namely, Jinnouchi Taizou’s “Boku wa Nanika wo Ushinaisou da”. (I cry every time I hear it.)

“Who exactly will begin it?”

It gives me that sort of thought once more.

At any rate, Part B will be out before long. Just wait a bit longer.

March 2003. An early morning of allergies.