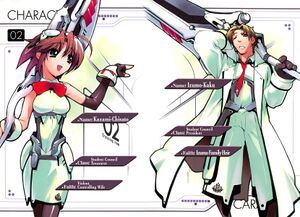 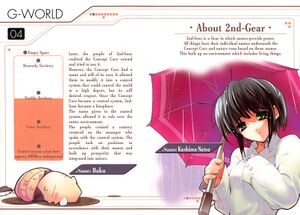 2nd-Gear is a Gear in which names provide power.

All things have their individual names underneath the Concept Core and nature runs based on those names. This built up an environment which includes living things.

Later, the people of 2nd-Gear realized the Concept Core existed and tried to use it.

The name given to the control system allowed it to rule over the entire environment.

The people created a country centered on the manager who spoke with the control system. The people took on positions in accordance with their names and built up prosperity that was integrated into nature. 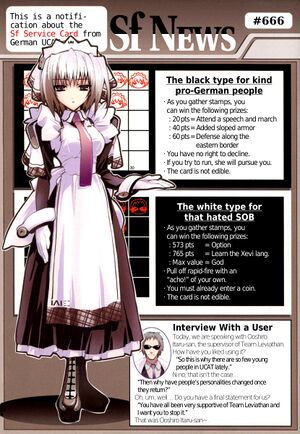 Top left: This is a notification about the Sf Service Card from German UCAT.

-As you gather stamps, you can win the following prizes:

20 points = Attend a speech and march

60 points = Defense along the eastern border

-You have no right to decline.

-If you try to run, she will pursue you.

-The card is not edible.

Black square: The white type for that hated SOB

-As you gather stamps, you can win the following prizes:

-Pull off rapid-fire with an “acho!” of your own.

-You must already enter a coin.

-The card is not edible.

Bottom square: Interview With a User

Today, we are speaking with Ooshiro Itaru-san, the supervisor of Team Leviathan.

How have you liked using it?

“So this is why there are so few young people in UCAT lately.”

“Then why have people’s personalities changed once they return?”

Oh, um, well… Do you have a final statement for us?

“You have all been very supportive of Team Leviathan and I want you to stop it.”