There was a small break, but here is Owari no Chronicle 3-A.

This is a very long story, so thank you for sticking with me. Recently I’ve been hoping I can actually write the entire thing to the end.

Anyway, 1 and 2 laid the groundwork and now the story begins to move forward in 3. Everyone’s stances and connections to the past will become more involved from now on, so the story might get even longer.

I finally feel like I’m having an easier time writing this. There are still plenty of difficulties though, and I have tons of homework to do. At any rate, I’ll be doing the best I can.

Now let’s get to the usual chat.

“I was looking at the afterwords with my other old upperclassman and I get the feeling I don’t really have to read it.”

“If you don’t follow the proper customs, you’ll be cursed, so be careful.”

“What kind of curse?”

“You’ll wake up in the middle of the night and find me at your pillow drinking tomato juice and playing Famicom. I’ll say ‘C’mon, that totally hit!’, so make sure to agree.”

“Please spare me that horrible scene. By the way, I see you finally put in one of those characters you like.”

“There’s already been an automaton.”

“No, I meant blondes with giant tits. You really like them, don’t you?”

“That isn’t how I thought you’d react!”

“And are you forgetting that she’s a doll? You can’t look at it the same way. …Just kidding. Did you really think I’d say that? What matters is the romance. Keep it spinning!!”

“That’s more like it. I was expecting that kind of a self-deprecating gag.”

“I’m glad I could live up to your expectations, but I’ve been using that kind of joke too much lately. I need to think up something new. Maybe it would have more impact if I was like you and insisted on someone below the age of ten.”

“My girlfriend is going to read this, so stop making things up!! We’re thinking of getting married soon, so saying I like babies is fine but little girls are out of the question.”

“I’m pretty sure both are out of the question, so don’t worry. And this will be going out to the entire nation, so it’s time to start regretting this.”

“I had a bad feeling about this when the other old upperclassman said he recommended me and that I should ‘prepare myself’. You never betray people’s expectations, do you?”

“Just so you know, that guy is a terrible person who barges in and only talks about cats and video games when I’m suffering from a cold.”

“Yeah, he did that to me too. He said he was thinking of starting to make doujins because he was turning thirty.”

“Is that some twisted version of going bungee jumping when you turn thirty? There really isn’t a single normal person around me. …And you aren’t helping!”

“Please stop getting mad at me for no reason. More importantly, why does the data on the next volume say it’s the middle part?”

“This is going to end up as text, so saying it cutely isn’t going to help. Why isn’t the second part the last part!?”

Don’t worry about it.

This time my proofreading music was “Art of Fight” from the game Ryuuko no Ken. (Am I the only one that thinks you could take that to mean “aesthetics of fighting”? And people have mixed opinions of music with no real context, but I find it’s good at getting me fired up.)

“Who exactly is hoping for a fight?”

You can try thinking about that.

Anyway, the next book will be out in June, so wait just a bit.

February 2004. A morning with pollen approaching. 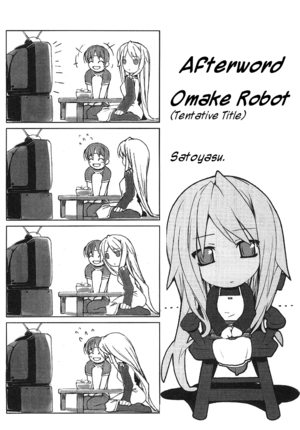