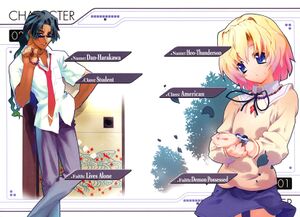 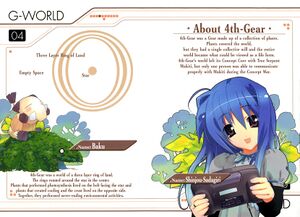 4th-Gear was a Gear made up of a collection of plants.

Plants covered the world, but they had a single collective will and the entire world became what could be viewed as a life form.

4th-Gear’s world left its Concept Core with Tree Serpent Mukiti, but only one person was able to communicate properly with Mukiti during the Concept War.

4th-Gear was a world of a three layer ring of land.

The rings rotated around the star in the center.

Together, they performed never-ending environmental activities. 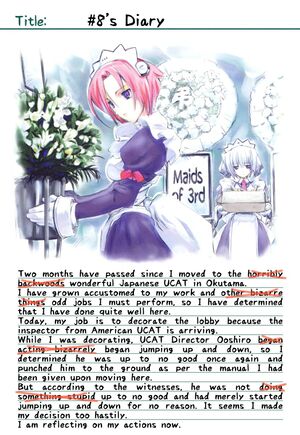 Two months have passed since I moved to the horribly backwoods wonderful Japanese UCAT in Okutama.

I have grown accustomed to my work and other bizarre things odd jobs I must perform, so I have determined that I have done quite well here.

Today, my job is to decorate the lobby because the inspector from American UCAT is arriving.

While I was decorating, UCAT Director Ooshiro began acting bizarrely began jumping up and down, so I determined he was up to no good once again and punched him to the ground as per the manual I had been given upon moving here.

But according to the witnesses, he was not doing something stupid up to no good and had merely started jumping up and down for no reason. It seems I made my decision too hastily.

I am reflecting on my actions now. 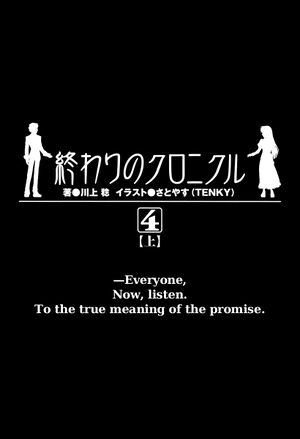 To the true meaning of the promise