Final Chapter: Where the Wind Reaches[edit] 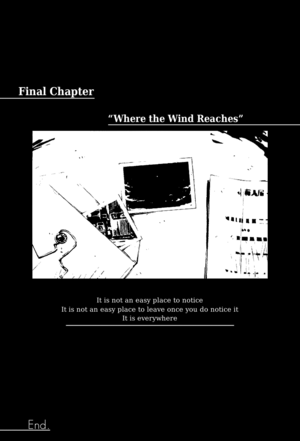 It is not an easy place to notice

The ground below was covered by the yellow and red of sand and rocks, but those colors were joined by an artificial gray.

The sandy wasteland contained a long runway, a few buildings, and a group of warehouses.

Those manmade structures had a distinct smell, but that faded toward the end of the runway.

A single person stood at that midway point between man and nature.

It was a tall young man with the sleeves of his flight suit rolled up. His blond hair was brushed back and his blue eyes looked up at the identically colored sky.

However, a male voice suddenly called out from behind.

“Don’t make it sound like you doubted I would, Richard Thunderson.”

As the young man named Davis turned around, a bottle was pressed against his chest.

“You can celebrate your return with this. I swiped it from Lord Northwind’s room, so drink it and throw it out here.”

The second young man had the top half of his flight suit removed. His skin was tanned and his blond hair was cut short.

Thunderson asked with his eyebrows slightly lowered and Davis shrugged.

But he must have thought that was not enough because he forced a smile and continued.

“Even the doctor told me I need to be there when she gives birth. She’s apparently going to have twins.”

“But her family won’t stop telling me to leave the kids with them if anything happens. …They aren’t bad people. In fact, I’d say they’re good people, but still.”

“Their only daughter was stolen away by a flyboy with no known relatives. You should have expected this.”

“You’re right.” Davis looked up into the sky. “She told me she would call me when the kids will be born and she told me to keep flying until then.”

“Then am I supposed to give my thoughts? Should I call it a tearjerking story?”

In that instant, a shadow passed by overhead.

The shadow instantly flew by from east to west and left something behind: wind.

That wind stirred up the wasteland, tore into the sky, and wrapped its arms around the two men.

By the time its embrace left them, they were already looking into the western sky.

“Damn that kid Curt! I thought I’d dealt with him by putting him and Lyle in Team A with you, but he’s been fighting back by flying almost as recklessly as me.”

“Sounds like I need to give you a warning before moving on to him.”

“Oh, c’mon. Do you really think a man who hasn’t held the stick for three months now can give me a warning?”

“Hmph.” Davis crossed his arms. “I’ll have you know I flew a civilian piston engine everyday while I was gone.”

“Well that would be why your wife’s family doesn’t like you, you idiot. …C’mere.”

Thunderson began walking down the runway and toward the hangar.

He looked over his shoulder with a smile.

“Curt doesn’t know, so he just used up his training time for the week, but we’re bringing out the new models today. Both Team A’s and Team B’s. We’ll be the first to pilot those two craft we put so much into.”

“And those will be the prototypes we test from now on?”

“Right. Sounds great, doesn’t it? Remember how I said I don’t really know what the point of this fight is? Well, that’s why I like having events like this and other opportunities to fly.” He stopped smiling. “While the others are out fighting a war, we’re working out the kinks of the new craft and creating the final prototype that will most likely determine the design direction American UCAT’s air force takes from now on.”

“You sure are selfish.”

“For taking part in this fight without knowing why?”

“No.” Davis held up the bottle he had been given. “What am I supposed to do with this?”

“You’re right. I shouldn’t get so depressing with a man who just returned from the world below. …How about we hide that in Essert’s locker to give him a scare. That idiot showed off his reverse spin cornering in the 90R when taking Lord Northwind into town last week, so Lord Northwind pinned him to the window.”

“Sounds like there’s no one worthwhile in your team either.”

“Yeah, and that’s why one of them died.”

“I heard. Hughes, right? That makes two with Ohara.”

Davis began walking in long strides to catch up with Thunderson.

“Let’s do our job right. Let’s make sure we won’t feel ashamed to anyone. After all, the sky is a place to be sought, not a place for shame.”

“I agree with you on that one.”

Thunderson frowned while watching him take a swig.

“Are you planning to make the first flight drunk? Where’d you learn a bad habit like that?”

“You’re the one that gave me the bottle. And besides, I said I’ve been piloting a civilian piston engine for three months, remember? Ever heard of a grassroots race? You drink a bottle after each circuit and the first one to vomit has to go land. How about it?”

He brought it to his mouth and gulped down even more than Davis had.

“I discussed it with my wife,” said Davis as he watched Thunderson tilt up the bottle. “If they are twins and one of them is a boy…we’re thinking of naming him Richard.”

Thunderson spat out the drink and Davis watched him hold his nose and tremble.

“I’m glad to see you’re excited enough to give a full-body celebration.”

“Don’t be stupid. What kind of joke is this?”

“It’s simple. This way, I won’t feel any guilt if I have to physically discipline him.”

Davis laughed loudly and from the gut. The laugh carried up into the sky.

“I told my wife he would surely grow up to be a man like you. One who rejects others, acts superior to everyone else, and believes that he’s always right about everything, but at the same time, truly hopes he’s wrong.”

“That’s about the worst kind of person you can be.”

Thunderson clicked his tongue, threw the bottle into the air, and watched the sunlight reflect off of it.

“Then if you have a daughter, I’ll tell her what an idiot her father is. And I’ll tell her to name her own kid after her father. That way, the idiot germs will assume he’s already infected and avoid him.”

“That sounds wonderful. But if I have a daughter, I’m sure she’ll take after my wife. She’ll be a liar, but one who’s always thinking about others.”

After the sound of the shattering bottle, Davis’s voice continued.

“I am so very happy right now.”

As the two of them approached the hangar, two forms left it.

Trucks were pulling out two mechanical dragons that had tires protruding from their landing legs.

The two dragons of blue and white waited beyond the shimmering heat rising from the runway.

“Hey,” said Thunderson while putting his flight suit the rest of the way on. “I’m sure your wife is happy too.

“Yes. And that is why I will go meet her where our happiness coincides.” Davis raised his right arm. “Now, let’s go.”

They were off to their own battlefield.

She felt like she was dozing and she did not understand the dream she was having.

She thought the two men seemed to be having fun.

She then lifted her head from what she was using as a pillow.

She looked around and found a large room faintly lit by emergency lights.

This was Japanese UCAT’s cafeteria. All of the tables had been removed and countless people were lying on the floor.

All of them slept with blankets over them and the blue and white armored uniforms were mixed together indiscriminately. Some creatures made of plants slept next to everyone and they slowly expelled oxygen.

Everyone had eaten, drank, and celebrated here until they grew tired.

Before going to sleep, she had decided she would live with Harakawa from now on. He had complained, but her great-uncle had said he was too busy to look after her and the negotiator boy had played a certain recording for them. The recording was the boy’s proof that Harakawa was deeply obsessed with figures.

Her great-uncle had not looked happy, but she was sure Roger would smooth things over. After all, he and the negotiator boy had apparently planned together to ask her where she wanted to live.

She had also desired to continue working with the Leviathan Road, so she had received the role of temporary inspector from American UCAT.

As Harakawa had been linked as Thunder Fellow’s pilot, he was given a temporary position in Japanese UCAT.

She looked around now and saw the group who had visited Harakawa’s house sleeping nearby.

She also saw someone moving between them: Harakawa’s homeroom teacher.

The woman walked around and fixed any blanket that had fallen out of place. At the moment, she fixed the blanket covering a girl and her black cat. That was the girl who had shown up partway through the party and harshly questioned everyone as to why she had not been called.

Heo began to get up in order to help, but the woman noticed and shook her head with a smile.

Heo accepted the refusal because her body still desired sleep.

As she pulled up her blanket in order to go back to sleep, she heard a song.

Someone was singing in their sleep nearby.

She looked over and found a girl sleeping in a sitting position. She wore a white armored uniform and her long black hair swayed as she slept and sang to the negotiator boy who slept with his head on her lap.

Heo also saw a small animal within arm’s reach on the boy’s head.

She could hear the song because the girl seemed to be singing it as a lullaby for the boy.

“As our Lord, free us of wrath,

“Since times of our fathers He hath

“Promised to spare all mankind

“Promised to spare all mankind.”

The faint song that almost sounded like humming replayed in Heo’s heart.

Her mother had sung her that song long ago.

Only once she placed her head back on what she was using as a pillow did she realize it was Harakawa’s arm.

She gave herself over to him. She brought her head to his arm, placed the blanket over that, and curled up as if clinging to him.

For some reason, that action made her feel as if she understood why her parents and other relatives had fought.

Her new life would begin the following day.

That reminded her that her great-uncle had given her two things before leaving for the base.

They were contained within an envelope above her head. One was the paperwork needed to transfer to an Akigawa city school and the other…

…A photograph of the North Star.

She had been delighted to see he and Diana were safe and he had given a troubled look when she had hugged him.

She wondered if she would be troubling him more in the future like she would with Harakawa.

She also wondered if he too had been thinking about the dragon which had disappeared toward that star. 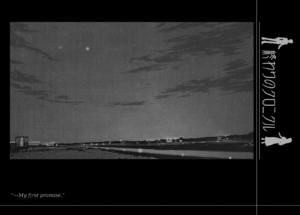 She closed her eyes without knowing the answers, but her thoughts turned to the parents who had protected her, a number of other people, and even Black Sun.

She breathed a sigh of relief, pressed against Harakawa, and fell asleep.

And as she did, she wondered if she could one day become like them.