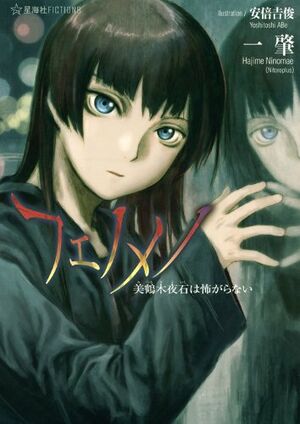 "Phenomeno" (フェノメノ) is a Japanese light novel series written by Ninomae Hajime (一肇) and illustrated by Abe Yoshitoshi. The series is complete with 6 volumes. There is also a visual novel based on the first chapter of the first volume in the series.

Yamada Nagito, a university student living away from home, needing a cheap place to live he finds out about a mysterious “House that grants wishes” on the market for a ridiculously low rent; he snaps up the house and starts living there. A few nights in he starts hearing strange creaking noises. Each and every night he’s assaulted by these torturous noises. The last straw is when he finds the number 7 carved into the wall, as if counting down to something. Yamada having an interest in the occult seeks help from a website he frequently visits: “Ikaigabuchi”, which specialises in occult topics.

Visit the forums to give your feedback or discuss this series.

The Phenomeno series by Ninomae Hajime[edit]