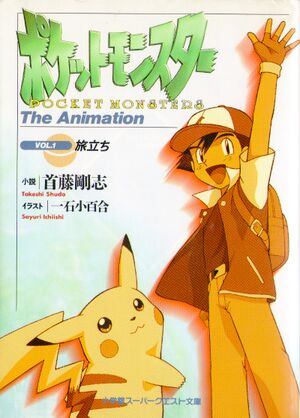 Pocket Monsters: The Animation (ポケットモンスター The Animation) is a two volume light novel series written by Takeshi Shudo and illustrated by Sayuri Ichiishi. It is a novelization of the Pocket Monsters (AKA. Pokémon) anime series published by Shogakukan under the Super Quest Bunko label. As the original head writer of the TV series, Takeshi Shudo greatly expanded upon and occasionally modified the content of the show in order to provide a much deeper look at the world of Pokémon than could be afforded in the anime.

Pocket Monsters, or Pokémon for short. Mysterious creatures that populate the world, their origins and numbers are unknown. In the current era, many Japanese youths leave home at the age of ten to become Pokémon Trainers, people who capture wild Pokémon and participate in a sport known as Pokémon battling with them in order to become Pokémon Masters.

Ash Ketchum of Pallet Town is one such youth, who after oversleeping on the day he left home got stuck with an uncooperative electric mouse known as Pikachu for his first Pokémon. With a family legacy of nothing but failure, Ash steps out into a world filled with vicious beasts, dastardly thieves and a girl intent on getting him to replace her broken bicycle. In a world where the majority of up and comers are unable to make a living, becoming a Pokémon Trainer isn't all that easy after all...