NOTICE: Yen Press has licensed 'Rokka no Yuusha', with the first volume being released in April 2017. 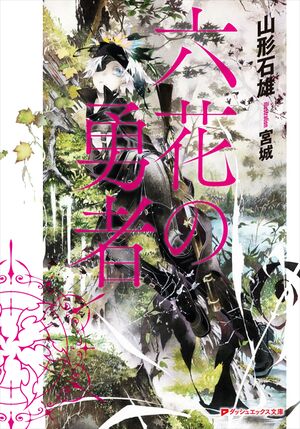 Rokka no Yuusha (六花の勇者) is a novel series written by Ishio Yamagata and illustrated by Miyagi. An anime aired from July to September 2015, adapting the first volume of the novels.

When the Majin awakes from the depths of darkness, the Gods of Destiny choose 6 heroes, granting them power to save the world. The young man who calls himself "world's strongest person," Adlet, is selected into this group of six, the Six Flower Heroes, and ventures forth to battle to stop the Majin's resurrection. However, at the appointed gathering place, why are there seven people? Right after, the Illusion Fog barrier is activated, shutting the seven right in the forest. They fall to the suspicion that one of them is an enemy. And then, the one whom that suspicion is most directed at is Adlet..

When “The Majin” awakes the goddess of fate will choose six warriors and bestow them with the power to save the world. Somewhere on their bodies a crest in the shape of a flower will appear and as a result the warriors are called “The Heroes of the Six Flowers”. As the day of The Majin’s revival nears, Adlet, a boy who calls himself the strongest man in the world, is chosen as one of the “Six Flowers”. But when the heroes arrived at their designated location, they found that there were seven heroes present. Which meant that one of them was an imposter and an enemy. Confused by the impossible situation, suspicion and paranoia spread among the chosen. And within a thick forest, the heroes’ fierce battle begins!