Prelude: Sophia of the Big Bang[edit] 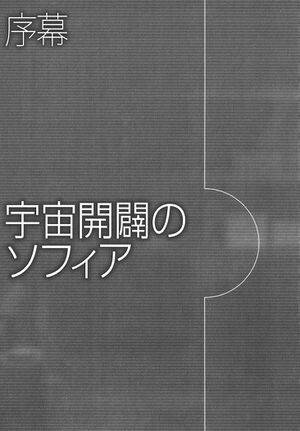 Have you ever heard of the butterfly effect? A flapping butterfly can vibrate the air particles around it with its wings and stir up things like tornadoes in a faraway place. No one is able to know what could be made by even the most insignificant matters. The goddess is one of these ignorant ones. Although her desire to know created the world we are familiar with, this doesn’t mean she will be able to make accurate predictions of this world. Despite this, we still connect to each other like thin threads, using the thinnest knowledge and power we have to fight for the future we are pursuing.

For normal people, 99% of our senses are veiled. Humans are slow-witted creatures who transcend their own imaginations, but it is because of this that we move forward. We don’t give up—ever. And I will say the same thing to you every single time: “Don’t escape. Face it head-on.” This is to save her; this is to prevent you from collapsing; this is also to remind myself of the past events. Even when you couldn’t remember every time, even when it happens once in a hundred times, I still hope—you would remember me.

I’m still there, and will still be there in the future, behind the 1% wall...