*knock-knock*. The door of one room of the girl’s dormitory was lightly knocked on.

When Lux slightly opened his eyes from within a deep catnap, the furniture of the usual two person room came into view.

Today was a holiday.

When Lux unusually tried to escape into the blanket as he said so,

“––Do you not mind even if I expose to every one of the class that you are sleeping with Philphie-san, Nii-san?”

When he hurriedly opened the room’s door, Airi with a serious look came in.

“You know… Airi. That kind of joke is bad for my heart, so could you stop it?”

“I was serious though?”

Being told with a carefree smile, Lux became speechless.

“Lately, you rely too much on me, Nii-san. Even for the matter before, I was against it, you know? But Nii-san said he will do it no matter what, so I had no choice but to accept––”

“Ah, I really appreciate it. Thank you, Airi.”

On that day, after having come back from the ruins investigations.

Lux predicted the situation where Krulcifer would want to go to the duel alone, and asked Airi beforehand so as to stop it.

In other words, the sleeping effect of the medicine that Airi concocted was just a little.

Even so, Airi, also thinking about Lux’s safety, was hesitant about what to do until the end.

“I’m always worried, and you don’t even consider my feelings…”

Being asked by Lux after she said that in a subdue voice, Airi answered “I-It’s nothing!” in panic.

“To begin with, what is this? To think you have forgotten about asking me, your little sister’s help to choose an outfit for a date ––”

“S-Sorry. Since it’s just after yesterday, and now today, so I’m a little tired… Or rather, it isn’t a date.”

As she smoothly brushed that away, she said so and urged Lux.

After wearing the clothes which Krulcifer had bought for him and having Airi check them, Lux left the girl’s dormitory.

Near the school gate, Krulcifer wearing a light blue dress was standing.

“Well then, shall we go? I called a carriage for today, so––”

As expected, flying with Machine Dragons would be boorish and since both of them had piled up fatigue, they could also not do that.

When they were about to get on the carriage as planned, Lisha came over before the school gate.

Even though you should usually be in your atelier –– Lux looked puzzled.

“I’m also going with you. You’re going to meet with that butler of the Einvolk House, right? You two don’t have your Sword Devices with you, so you’ll need an escort, right?”

On the waist of Lisha who said so, there was a Sword Device hanging.

“Ah, you know? Lisha-sama said that she was concerned about your relationship.”

Before they were aware, Tillfarr who came over to see them off declared with an innocent smile.

“Y-You fool! Don’t say things that could be misunderstood! I just––”

When Lisha who saw that desperately tried to smooth it over, Krulcifer chuckled.

“Then, I shall gratefully take you upon your offer.”

When Lux awkwardly nodded, the three of them got on to the carriage.

The destination was a high-class commercial district which was originally designated for concluding the engagement.

Perhaps because it was a holiday, the streets seen from the window of the carriage were very bright and lively.

As if to heal the wounds and fatigue of last night’s duel, Lux was looking at the flowing scenery.

––That evening, when all was settled.

The Heir of one of the Four Great Nobles, Barzeride Kreutzer was accused of crime and the matter had not yet been publically announced.

It seemed that Barzeride arranged bandits disguised as private soldiers behind his father’s and family’s back and was working in the shadows to allow illegal digging at the ruins and applied pressure to the opposition.

No –– they did not know whether it was really by Barzeride’s individual decision, but anyway, after all the investigations were over, it was a fact that he would be obviously sentenced to heavy punishment and imprisoned.

Then, about the Black Hero’s true identity.

The case where it was known that Lux was <Bahamut>’s user seemed to have been kept secret by Queen Raffi’s management.

Either way, as for Barzeride’s crimes, however much power of the Four Great Nobles he held, he would not come out for at least five years.

(That in itself isn’t particularly worrisome, but––)

There was no horn for summoning the Abyss in Barzeride’s possession.

But, it was an undeniable fact that the Diabolos had intentionally been summoned before the ruins at that time.

In other words, it was very likely that there was an existence suggesting Barzeride’s actions and manipulating the Abyss behind the scenes.

It was still unknown whether it was Lux’s brother of the Empire –– Fugil, whom he was pursuing, though.

“We have already arrived.”

While he was lost in thought, they seemed to have arrived at the destination.

A high-class restaurant where it was scheduled to talk about the matter of the engagement.

As they got down from the carriage, they went in the restaurant along with Alterize who was in front of a shop.

As a reservation had been done beforehand, there was only the female owner inside.

Alterize, in the middle of greetings, turned her eyes next to Lux.

For a woman butler with an upright character, she revealed an unusual troubled expression.

“I’m their escort. Is there any problem?”

“Hmm. Well, since I came until here, you won’t be attacked by assassins. I’ll stand guard outside.”

Perhaps because she was being unusually considerate, Lisha went out of the shop.

As she sat on a seat and coughed once, Alterize straightened herself and bowed her head.

“The matter this time. It is my responsibility for having tried to press the engagement forward without seeing through Lord Kreutzer’s scheme. I also do not know how to apologize to Miss and Lux Acadia-sama. Since I will receive a severe punishment upon my return to the Einvolk House, in this place, I implore your pardon…”

Lux and Krulcifer who saw that hesitated for a little while.

Though Lux had heard from Krulcifer, she seemed to have the position of an orphan taken in by the Einvolk House.

This was probably the result of devoting her loyalty in her own way and executing an order.

Lux could not bring himself to especially blame her.

As Lux thought so and turned his sights next to him,

“Can you raise your head? It is embarrassing to lower one’s head inside a shop after all.”

Krulcifer answered with a cool face.

At first glance, it looked like a cold attitude until very recently, but her tone was gentle.

“As for the matter this time, I am also at fault. You also have it hard, Alterize. So –– we are even. There is no need to apologize.”

Only just a little, the two girls’ gazes crossed and a calm silence was born.

Alterize, adopted by the head butler of the Einvolk House from an orphanage.

And Krulcifer, dragged in as a lineage of the ruins.

Lux seeing this actually felt that the two girls with similar circumstances that were working hard could surely get along well.

It was above all a happy thing.

“Those words are wasted on me. But –– my mission is already as good as settled, too.”

Then, Alterize suddenly said such a thing.

“Lux Acadia-sama’s ability as a Drag-Knight and his wisdom of having seen Lord Kreutzer’s conspiracy and broken the trap. I certainly witnessed them. Moreover, he is acknowledged by the New Kingdom’s Queen and had connections with many feudal lords and nobles. The Head of our Einvolk House will surely judge you to be suitable as the fiancé, too.”

The moment when he saw Alterize’s modest smile, Lux was perplexed.

Confused, he whispered in a low voice into the ear of Krulcifer who was beside him.

“…Wait, Krulcifer-san. What does this mean? Haven’t you told her yet!? About our relation –– being an act.”

“I did not have time for that. That’s why I intended to tell her now, but––”

Perhaps because it was unexpected, Krulcifer who was also somewhat flustered replied.

“Please rest assured. From here on, it is my job. I will put all my soul into recommending you by all means as the fiancé to my master, the Head of the Einvolk House.”

“Well then –– I shall take my leave. I have already dealt with the bill for dinner, so you two, please take your time. It is the least I can do to apologize.”

When briefly saying so, Alterize calmly left her seat.

“Well then, excuse me. Miss––. I will visit you again someday.”

Her gesture had already returned to the usual serene one, but a smile which hid something floated on her expression.

When Lux unintentionally tried to chase her, it was already too late.

“She’s gone. Even if she returns to Ymir, it will be good if she also does well there.”

“That’s right––…. Not that, what do we do!? About the matter of the engagement!”

“If Lux-kun is fine with it, I do not mind officially concluding an engagement.”

When Krulcifer said so with a mischievous smile, Lux’s face turned red.

“P-Please don’t tease me. Besides, the request will be over soon, so––”

“You’re right –– with this, the contract with you will also be over for the time being.”

The special request made on a whim by Principal Relie.

Exactly one week has passed since that day, and Krulcifer’s request was about to end.

Krulcifer’s request saying “I want you to become my lover”.

Lux was troubled in various ways as she was his first experience, but––

(Did I properly accomplish it?)

As her request was about to end, Lux felt a little lonely.

“I might not have been the suitable person for it, but it was fun.”

He turned a gentle smile to Krulcifer.

Though that was without doubt Lux’s true feelings,

“That’s right. But sorry –– as expected I am not really fond of indecisive men.”

“Being “lovers” with you for one week, I once again realized it.”

(I-It’s unexpectedly painful to hear that!)

He was originally a fake lover, so he understood that it would turn out like this, but––

Krulcifer softly drew her face to the mug of Lux hanging his head depressed.

“But, the real you is quite a coercive person. So –– I like the coercive you very much.”

The moment when Lux raised his face to Krulcifer’s whisper, his lips were blocked.

The smell of a high-class perfume and the feel of sweet, soft lips.

At the kiss with just a little bit of touching, Lux’s body suddenly turned red.

“It is a little expression of my gratitude for handling my request. ––Isn’t it enough?”

Krulcifer once again kissed the confused Lux as if pecking repeatedly.

When she finally let go, she stuck out her tongue and licked her lips.

“I don't lose anything, so it’s fine, isn’t it? If Lux-kun really accepts to get engaged with me –– I do not mind continuing this.” 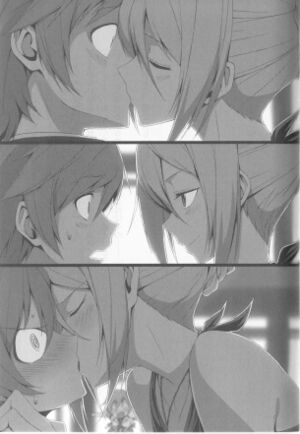 When Krulcifer softly ran her fingertip on the cheek of Lux, who was already completely confused,

Lisha barged into the store, she interrupted in a panic.

“It can’t be helped, huh. Well then, think about the engagement talk.”

“Eh…? Hey! Explain Lux!? What does she mean by engagement!?”

The busy daily life returned to the Fort City.