A shadow dances deep in the night.

Leaping from one rooftop to another, from building to building. With an inhuman agility and enthralling steps, bathed under the moonlight's glory, any witnesses would have been instantly smitten by her.

Those springing steps, allowed people to imagine her feminine beauty. And to be truthful, a pair of long legs with dancing-like steps, can only belong to a young lady in her prime.

The night wrapped around her snow white skin, further refining her supernatural beauty.

If we were to discuss her figure; a beautiful black dress tightly wrapped around her body, with only her cleavage prominently displayed, her full chest was concealed by the dark.

Her most captivating parts are her ruby red lips.

A pair of sharp fangs.

The lips reveal a pair of teeth, abnormally sharp and slender. Even with such alluring beauty, people can still feel the hidden danger.

Danger – with the beauty that almost makes one want to be bitten.

Beauty in the night, with the strength and power to leap from building to building, and the fangs.

Based on this world's legends, it is the truth of her body.

That is – the king of the night.

That is – a vampire.

With leaping skills way above humans, people always thought they had bat-like wings.

While discussing about vampire legends, it is almost certain it is this kind of blood-drinking animal. Maybe because bats can zip across the night like a shadow, thus people imagine these kind of things.

In reality, there are no wings, but certainly eyes like those of a predatory bird exist.

She is thirsty right now.

It is a thirst from the depth of her soul.

The only way to satisfy her thirst - is one thing.

Whispering in a sexy and loveable voice, the girl stops.

Her eyes flicking a scarlet spark, locking on to the prey.

Her sight locked on to a young man, walking alone in an alley.

He appears to be the same age as her – although it is impossible to tell the age of a vampire – about 16 or 17.

To a female vampire, it's a great catch – a slender and good looking boy.

Slender body, decent looks, with matching tea-colored hair. In the street barely illuminated by lamplight, it is possible to mistake him for a girl. Although not as good as her, his white skin is both glossy and tender.

Finding such a prized prey, the girl could not resist licking her lips.

In an instant, she lands in front of the youth.

As if stunned by the beauty landing in front of him, the youth freezes.

To the apprehensive prey in front of her, the girl reveals a warm smile.

"I am called, Rushella Dahm Dracula. I am a vampire of the highest class, one of the purest bloodlines. Please be honored, that you were chosen by me."

The boy still does not react.

A human meeting a vampire at night, they would usually react like this.

"I couldn't but help to notice the delicious smell of your blood. I was drawn by your flavor. I thought you might have been bleeding, but it looks like you are not injured. However such a delicious smell still fills my nose – such a sweet, sweet smell."

During her nightly stroll, she suddenly smelled the delicious flavor.

Attracted by the smell, she landed in front of him.

She puts her arm around his shoulder, revealing her chillingly sharp fangs, and moves toward the left side of his neck.

No need to tip-toe, no need to bend down. A perfect height.

It is even more delightful.

All one needs is to enjoy.

Rushella pierced his skin with her fangs, and began to drink his blood, drop by drop.

It was beyond "just" delicious.

A bit dense, full of the wonderful essence of youth.

This delicacy is clearly not only for quenching the thirst, it is also definitely the entree for tonight.

Just a few drops, and her thirst subsided.

Such a high class blood definitely cannot be a last meal.

According to vampire legends, after drinking one's blood for several nights, you can turn him into a servant.

Rushella sank into this sweet fantasy, then was brought back to reality by a sentence.

She suddenly backs away from him.

Thus perfectly aligning their eyes together.

The youth in front of Rushella stared at her unhappily, with one hand holding down his wound.

"It hurts, it really hurts... what are you doing suddenly? Sucking nonstop... I must have lost at least 500 mililiters... It would have been troublesome if it was someone else."

He has both a worrying and a bitter look, and starts to limp away.

Rushella stares at him blankly as he appeared to resist her, but she immediately recovers, dashes forward with inhuman speed, and grabs his shoulder.

"A vampire, right? Haven't met one in a while... you should be more careful; in such chaotic times, chasing and catching any prey you meet, you could easily get exterminated."

"Insignificant human rubbish! Also, you already received my <<kiss>>, you are now my servant."

Before she even finished, Rushella notices his condition.

His neck already uncovered by the hand, has no bite mark.

Indeed, the mark engraved on his neck - kiss - or the twin holes known as "baptism", had completely vanished.

What was in front of her eyes was impossible to believe, Rushella shakes her head, replying blankly.

Vampire characteristic #1: "Someone bitten by a vampire, will also become a vampire."

However, a complete transformation requires numerous blood sucking and during the transformation, the victim’s body will have an unremovable bite mark. 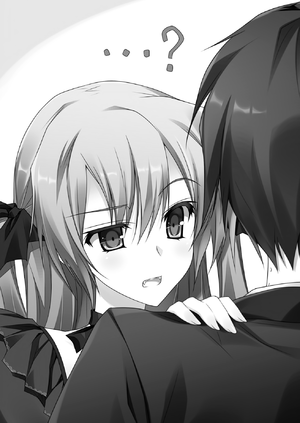 But... But this boy's body is completely unmarked.

"Haha, that is useless against me."

"Why?! What kind of measures did you use?"

"It is just a physical trait of my body. No matter how much blood you drink, I will never become a vampire."

Lazily explaining such a shocking event, the boy takes another step ahead.

Rushella follows him, as this is impossible for her to accept.

Vampire characteristic #1 amendment: "After having blood sucked, there is no way for a human to escape the fate of a vampire; the only cure is to obliterate the vampire who did the deed before the transformation is finished."

There shouldn't be another way.

"What kind of person are you?"

Facing the question, the youth turned around, replying half-heartily