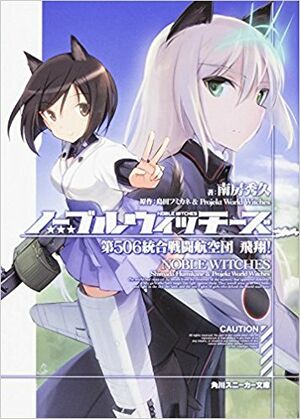 The Strike Witches series is also available in the following languages:

Strike Witches takes place in a world similar to Earth, but where magic exists. Magic abilities appear almost exclusively among young women, and usually disappears with age. However, these abilities are generally limited to raising a simple protective magic field, or moving objects slightly at a distance, or for some, flying on a broom. Then, in the 16th and 17 centuries, humanity entered into an age of discovery, highlighted by the Britannian witch Jamie Watt's invention of the magic engine, a steam-powered mechanical device which could boost a witch's natural magic powers several times over, which could then be used to drive all types of machinery. The magic engine was soon put to use in all forms of industry and transport, increasing production to levels previously thought impossible.

However, together with this huge increase in magic usage, sightings of the Neuroi, enigmatic lifeforms which had been spotted on scarce occasions for centuries, also began to increase exponentially. Appearing in countries all over the world, the Neuroi spread a noxious miasma, putrefying the land and consuming all types of metals, and they began encroaching on human territory. Normal soldiers could do nothing against that miasma, and humanity was on its last legs, with no choice but to retreat time and time again. It was then that it was discovered that a witch's protective field could block the miasma, and with the power of a magic engine, witches joined the battlefield. With the ability to easily wield weapons which would normally be far too heavy, imbue their attacks with magic, fly through the air freely, and block enemy attacks with magic fields, witches began to turn the tide against the Neuroi invasion. These witches, together with the Striker Units they wore, were known as "Strike Witches".

In 1939, as the European mainland faced the crisis of a Neuroi invasion of unprecedented scale, Imperial Army and Navy Witches from the far off Fuso Empire were sent to the battlefield as volunteer soldiers. One such Imperial Army Witch, Anabuki Tomoko, an ace and hero to the people after her outstanding service during the Neuroi raid known as the "Fuso Sea Incident", had been expecting to be sent to Karlsland, where the heaviest fighting was going on. However, she was instead deployed to the northernmost extreme of Europe, Suomus. There she meets the rest of her future fellow squadron members, none of whom had ever made a name for themselves in their former countries, instead being treated nearly like outcasts, half-baked witches without any talent or motivation. It's now up to the "Misfits Squadron", or officially the "Suomus Independent Volunteer Air Squadron", to find out how they can stand up to the Neuroi menace.

This series was written by Yamaguchi Noboru, also known for the Zero no Tsukaima series of light novels. It was first published in October 2006, and there are currently three books, with a fourth scheduled for Spring 2009.

A separate light novel using the characters from the OVA and anime series was written by Nanbou Hidehisa, and published in August 2008. A sequel was published in February 2009.

Yamaguchi Noboru author of Zero no Tsukaima, Strike Witches and many other works has passed away at the age of 41 due to cancer. RIP February 11, 1972 – April 4, 2013

Older updates can be found on the Strike Witches Updates page.

All Noble Witch chapters are translated on Projekt World Witches.

P.S. TOC will be updated within the next one or two releases.

The Eagle and the Moon and the Sun

After the Sky (Official Fanbook)