At the age of fourteen, while still a second year middle school student, he was imprisoned in SAO. He was truant from school due to being heavily addicted to games. Like most families, they rarely talked. Set on indulging in the virtual world, he was, of course, one of the first to adapt to Aincrad, which had turned into a death game.

However, ironically, due to his immersion in VR games, he had cultivated a high nerve reaction speed, and because of that he was given the proof of a hero, the [Dual Blade] skill. With Kirito's good intuition, he probably realized the role he was given quickly.

Within that boundary of time, Kirito (although he probably wasn't aware of it) was a person who only intended to strengthen himself and engaged in solo play, but was also a member of a raid group and shifted to a raid group's style. As a result, he shouldered and also suffered more, but Asuna and Cline's sincere devotion supported him. Finally, he plays the role of a Hero. 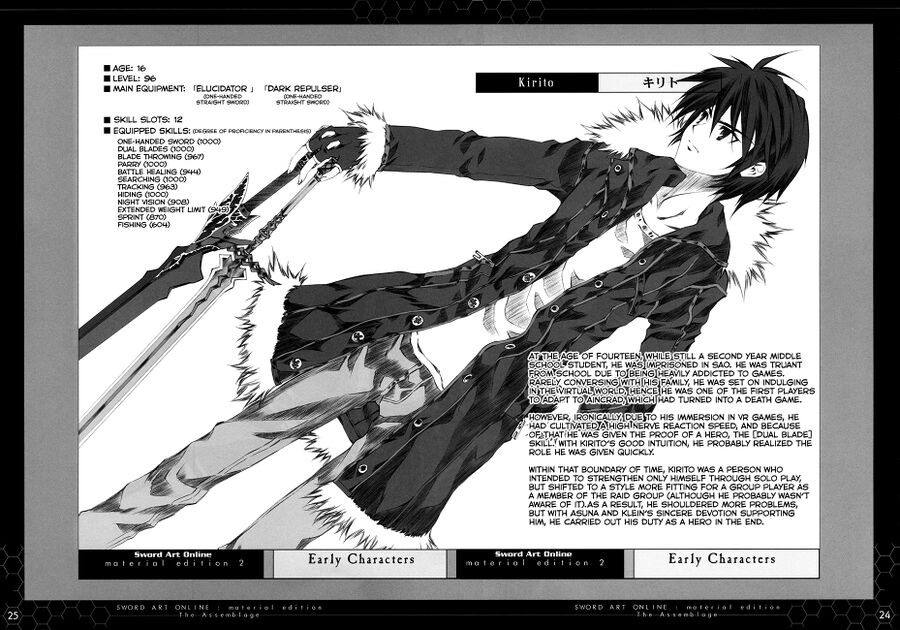 Among the raiding players, Asuna is included among the top ten highest leveled players, which is mostly occupied by beta testers. However, far from being inexperienced, she had never touched VR or MMORPG games before SAO.

Therefore, SAO's strongest hidden potential, who had climbed from a complete beginner to a true top player, is proven to have existed.

However, that was only possible due to the capable Asuna's intelligence, spirit, and fast reflexes, and her largest reason to be stronger, was so that she could use her formidable combat prowess to protect Kirito as she stood proudly beside him.