Ending X-02: A Certain Meeting and an Ending[edit]

A Certain Meeting and an Ending

There was no one there.

It was to be expected.

Shiroyama Kyousuke smiled a little as he looked back across the large land bridge. He stuck his smartphone in his pocket, but the action was somewhat awkward since he had one arm in a cast.

(What was I expecting?)

This was exactly the result he had been working for.

Even so, he felt a twinge of pain as he continued forward.

If there were indeed manmade miracles, he might meet the Meinokawa Sisters again as Aika had suggested. He did not know if that would be a good thing, but they would likely be drawn together.

Did he want that or not?

For some reason, he could not reach an answer.

At any rate, the job was complete. He had not always been able to predict the Meinokawa Sisters’ actions, but he doubted they could find him so easily.

So this was the end. Or it should have been.

Unpleasant sweat poured down his body as soon as a sweet voice reached his ears.

This had happened once before. A summoner had likely approached using a Chain rather than an Incense Grenade. He found himself inside an Artificial Sacred Ground and “she” was right next to him.

It was the White Queen.

It was the highest of the Unexplored-class.

It was a collection of benevolence, a symbol of holiness, and an anthropomorphism of radiance.

It was a pure white goddess who would not allow even a drop of impurity.

Or so the summoners and vessels across the world believed.

In this giant amusement park city, her otherworldly apparel would be seen as just another costume. Her beauty would gather attention, but she did not seem to care.

Kyousuke hesitantly spoke to the Queen who was so lethally close by.

“Shouldn’t you be dead?”

“Well, yes. But that me was an irregular version summoned with something other than the normal summoning ceremony. Plus, it was an unfinished product that did not quite manage to sew me into one of this world’s human souls.”

“You mean…your very being was split in two?”

“Although if the Sewn Realm summoning had worked, that ghost image wouldn’t have appeared. So it wasn’t so much an insignificant lizard’s tail as it was a…hm, a doppelganger I guess. Either way, it has nothing to do with me.”

Shiroyama Kyousuke could not stop himself from pressing his forehead against the railing.

Then he let out a meaningless yell. Now that he thought about it, that monster had continued to appear before him with a smile even after being destroyed once in the so-called Secret War.

“Oh, and the hostage that version of me was playing with was freed as soon as that me was annihilated, so don’t worry. That too has no connection to me.”

“I’d be in serious trouble if that at least wasn’t true.”

“Allllso. I would like you to thank me. Because I selfishly said I wanted to see you, the remnants of Guard of Honor destroyed each other through infighting and couldn’t go into hiding again. Heh heh heh. Basically, summoning me in my pure form isn’t that easy a thing to do.”

“What were you hoping to accomplish with all that?”

“Nothing really. Didn’t I tell you before? Guard of Honor was using me on their own and I had no personal interest in any of it. I didn’t really think of them as belonging to me. Oh, dear☆ Were you worried I would attack you to get back at you for destroying that organization?”

He had not thought that.

The White Queen did not have such blatant plots.

She was simply in love with being in love and that let desire influence her actions. She was so simple that it was in fact impossible to grasp the whole.

“Does that mean you won’t interfere with those two?”

“Heh heh heh. I appreciate that you avoided speaking their names. Yes, I am only interested in you, brother. I have no real reason to pursue someone who has left you.”

“There’s no need to glare at me like that. This is the scene that leads to the words ‘happily ever after’. Guard of Honor was crushed, so that should be the end of any trouble for those humans’ parents.”

“Didn’t you find it odd that a shrine’s priest would have a gambling addiction? Then there was the secret of one of those twins. And let’s not forget that Guard of Honor tried to create a life-size Repliglass figure as an artificial vessel for me, but kept failing.”

“Are you saying their starting point was set up?”

“The plan was to take everything from them with the power of money. Don’t you think it was lucky Guard of Honor decided to go the peaceful route and didn’t just slaughter them all to steal the Joruri documents?”

Now that it was all over, it was true that some of it may have been lucky.

The Meinokawa Sisters’ parents had not been so obsessed with gambling they lost sight of their family. They had been pitiable victims who had ended up making a rigged bet in order to protect their family’s lifestyle. Guard of Honor was at the root of it all, but they had been destroyed. Since the daughters had also paid off the debt, it may have been that all the loose ends really had been tied up.

But that depended on if that would be allowed to happen.

“Do I need a reason?” The White Queen laughed. “All the world’s members of Guard of Honor gathered here and were destroyed, but there are still plenty of organizations that worship me. I’m sure something else will rise to the surface among them. We may meet again sometime and somewhere, but do what you think best when that time comes.”

“If only I could take that as a joke… Government, Illegal, and Freedom are still pretty shaken as they work to clean up after all this and they still treat you like a goddess. People tend to rely on the supernatural when they’re feeling weak, so there’s a decent chance someone will go too far when it comes to you.”

In this case, they would decide Guard of Honor had been behind it all and the White Queen herself was innocent. Personal beliefs with no canon to follow were endlessly flexible. And those people would be entirely oblivious to the fact that they were working against their own best interests.

“Ah ha ha. I’m glad to hear we will have plenty of exciting locations for dates. But to be honest, I think half of the world’s chaos would utterly vanish if you became mine, brother.”

“Yes, but that’s because you’re directly or indirectly causing half of the world’s chaos,” spat out Kyousuke. “And I think the other half has to do with me. Or to be more accurate, all sorts of problems keep coming to the surface because of all the truly skilled summoners and vessels that were lost during that Secret War. Think about Guard of Honor. If those truly skilled people were still alive, the three major powers wouldn’t be in this weird stalemate and a large unit would have been sent in to deal with Guard of Honor before they grew this large. …Do you really think it’s right for me alone to be happy when I was the one that pulled the trigger that started that?”

That was why Shiroyama Kyousuke continued to fight.

He could not shake off those cursed words of “help me”, but he could not call himself a righteous hero.

He was the opposite. He had created the root cause. That weak boy continued to fight because he felt responsible and could not escape it.

“Then why not join forces with me and then use me to save even the other side of the planet, brother?”

“No, that would literally be the end of the world. Half the planet would be destroyed and we’d only have half a planet left.”

“I love you so much for seeing it that way, brother☆”

“Besides, you’re only in love with being in love, so you don’t really care about me, do you? If I gave in, you’d lose interest in less than a week, just like how people start seeing the negative sides of someone once they start living together. Right now, I know you’re after me, but if that hint were gone, the power to destroy the world really could appear anywhere at any time with no way to predict it. I’d rather avoid that.”

“Heh heh heh. Then should I favorably interpret that at as you at least wanting to keep me around?”

“The thing is…I did summon you to this world and sew you here for my own desire.”

“That was because I knew I couldn’t kill you on my own, so I wanted to keep you here and cut off your escape. That way, I could get everyone’s help to kill you once and for all. I thought something as powerful as you was nothing more than an evil that would drive both worlds to madness. …But in the end, you acted as a singularity that drew a ton of Materials to this planet. That left our cooperation in shambles and led to that awful Secret War.”

Then what was that about them being lovers?

He may have been a prodigy, but what had been the backbone to building such a great device?

The White Queen thought about all that. 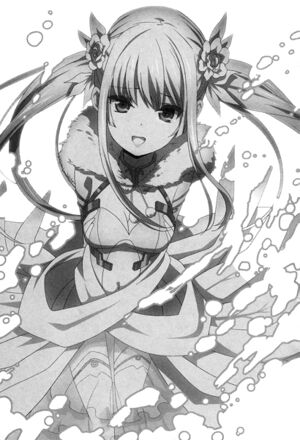 She moved her face in close.

Their lips were only a few centimeters apart.

She made it sound obvious.

That was when the limit arrived.

Shiroyama Kyousuke pondered the words of his nemesis for just a moment.

Finally, he turned around and vanished into the crowd.

The two of them parted ways.

Neither of their paths would accept the other.