Ending X-01: Waking From a Dream[edit]

“We will eventually meet again somewhere. And then we will remember everything.”

Waking From a Dream

His consciousness was fading in and out.

But Shiroyama Kyousuke could not afford to just collapse.

Slight ripples ran through his mind. And only when those ripples reached their peak did his intermittent vision widen. He was not even sure if he was asleep or not, but he could tell he was lying down and being jostled about.

Was he on a stretcher?

At any rate, he was being carried to a medical facility with some type of device.

A girl spoke from the side, probably while walking with the EMTs.

A piercing glistened on her tongue.

It was Incense Expert Ellie Slide.

“I scattered the pain with some incense to elevate your level of consciousness, but that is the most I can do. Someone else will have to handle the surgical process. …And with that in mind, there is something I would like to ask you.”

This city was the setting for the D.R.O.K. international trade show run by the Deltaston family. Once they recovered from the shock of their leader’s defeat, they would become an enemy. It would not be a good idea to use a medical facility under their control. These were people who did not hesitate to involve themselves in things like the Holy Key Women. Who could say what he would have implanted in him while he was anesthetized.

“After confirming the recovery of the 353, I used the method in your mind to fry all of the Box’s circuits. I did not leave any intact, so it cannot be repaired. More importantly, the White Queen’s sword tore through the entire foundational structure. If they investigate the wreckage, Government, Illegal, Freedom, and the Deltaston family itself will have to accept that they cannot stand up the Queen using Pandemonium.”

Kyousuke had difficulty accepting that anything that pure white evil had done was of any use.

“I will be leaving soon. Without the great bargaining chip of Pandemonium, the Deltaston family will only create friction between the three major powers and will rapidly decline. But that does not mean the remnants will not turn their hatred toward us. It would be best if I used some incense to bring Max back to his senses and then left this temporary city.”

“Probably. You don’t need to worry about me. This was my mistake, so I’ll settle it myself. But what happened to Himekawa Mika?”

He heard a gentle female voice on the opposite side.

When the focus of the conversation changed, Ellie Slide must have seen that as her cue to leave because her sleeved cap fluttered behind her as she walked off somewhere.

“The 353 vessels will apparently be taken back into whichever of the major powers they came from. The Deltaston family will likely request they be returned, but as the family declines, they will lose almost all influence.”

He questioned whether those vessels would want to remain in the world of the Summoning Ceremony after what happened to them, but that was not something he could decide for them. Most likely, some of them could not live out in the sunny world and only had a home here.

This was not a perfect happy ending.

(If that happens, I just have to answer their call again. Nothing says I only get one chance at this.)

For that reason too, he really needed to take action soon.

He had no obligation to let himself be dragged down by the sinking ship that was the Deltaston family.

It was a simple word.

And as he was carried somewhere, he reached his hand toward Himekawa Mika’s face. He formed a gun gesture and there was a small drop of blood on the index finger.

The woman in the tight skirt suit looked surprised at first, but then understanding entered her face.

This was his way of saying goodbye.

“I will bear the hatred of the Deltaston family. You abandon your special status as the vessel working with Shiroyama Kyousuke and disappear into the crowd of 353 that were sealed inside Pandemonium. That will greatly reduce your risk.” 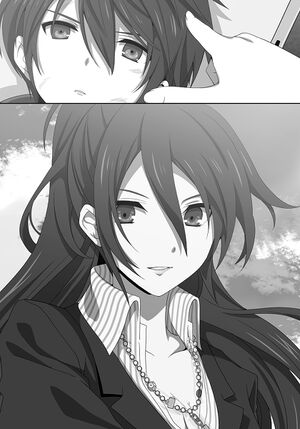 Himekawa Mika did not argue the point.

“It doesn’t look like making a giant fuss is going to change anything here.”

But despite that, Himekawa smiled.

“If there is something binding us, Kyousuke-kun, it is not something that can be explained by the rules of Summoning Ceremony ruled by that Queen.”

She too made a gun gesture.

It held no meaning.

“We will eventually meet again somewhere. And then we will remember everything.”