Ending X-01: Do Not Underestimate Youth[edit]

“Right now, you are like a hedgehog sticking out all its needles in fear of an unseen enemy.”

Do Not Underestimate Youth

But I ended up making an appearance anyway.

Perhaps because the Silhouette supporting her at the core had shifted out of place, the Colorless Little Girl grew as motionless as an empty shell. Someone gasped for breath deep within the vertical crack in her flat chest that seemed to lead into another dimension.

What kind of feelings were roiling within the White Queen’s chest now that she had laid a hand on her beloved? Whatever the result, she could not change what she had done. She had been driven by a twisted love before, but she had just broken again.

She now knew hatred in addition to love.

But that did not spell the end of the White Queen’s love. But not in the sense of carrying memories of the dead in your heart. Even after what she had done, it had not been snuffed out.

It was true Shiroyama Kyousuke had lost consciousness.

But his heart was beating. His brain remained.

At the very, very last second, something had deflected and diverted the White Queen’s attack.

A supernatural being far too graceful to be the Colorless Little Girl spoke to the White Queen.

Yes, this was a third being that had not been here before.

They were inside the Artificial Sacred Ground created by Ellie Slide. The laws of the world were bent there so humans of this world and Materials of the other could coexist.

<Are you irritated that your attack did not produce the desired result, or are you relieved that your beloved still lives? Depending on your answer, I may have to rethink my opinion of you.>

Something held the boy’s limp form. 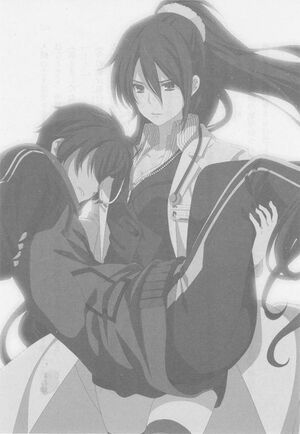 It was someone who may have been even closer to him than the White Queen. But most everyone in the current world was unaware of her because she had vanished into the shadows of history.

She was a beautiful woman with a long black ponytail.

She was an educator wearing a long white coat over a tight skirt suit.

She was one of the few good people in this hopeless world.

There was one witness from the past present: Biondetta.

She moved her trembling lips and seemed unable to believe her eyes.

But was Biondetta aware of that true identity? Was she aware this woman was the true ruler of the Queen’s Miniature Garden who had collected the full set of 1000 Awards each from Government, Illegal, and Freedom?

She had supposedly died deep underground during the Secret War.

But those who had passed Award 1000 could become a being of the other world. In fact, it was strange for them to remain in this world as humans. Even if she had been trapped underground with no escape, she still could have escaped to the other world.

<You have declined, Queen. You’re a mere shadow of what you once were.>

<I might be a Material now, but I’m only Divine-class. Simply standing before you should have caused to me to tremble and lose the will to fight, yet I just managed to insolently deflect your attack. But not because I’m special. That attack lacked the purity your white symbolizes. For this brief time, you have grown impure. When you faced me in the Queen’s Miniature Garden, you had resolved yourself to protect Kyousuke-kun even if it drove you insane and even if you were wrong. If you had that power now, you would have blown away the likes of me.>

With a quiet sound, the silver twintailed girl revealed her beautiful body to the human world like she was stripping off the Colorless Little Girl.

Her face was crumpled up.

She could not control her emotions and she could allow herself the look of a child on the verge of tears because Kyousuke was unconscious and thus could not see.

“But brother…my brother never said that to me. He chose being right over love. That was who he was. I could endure it because that’s just who he was…”

<Simply enduring it was a mistake.>

But she was rejected.

Shigara Masami stepped outside the trivial categories of Divine-class and Unexplored-class to stand above the Queen.

Her relationship may not have changed since she sacrificed herself to allow a great sinner like Kyousuke to escape the Queen’s Miniature Garden.

She was on a different level as a woman.

<You never confided in Kyousuke-kun or revealed your worries to him. You just agonized over it on your own, made a decision on your own, and destroyed everything on your own. Unlike the Colorless Little Girl, you fled from the courage needed to give voice to your resolve. As so very, very strong as you are, you may have been able to do it. By allowing yourself to break and breaking everything else around you, you may have been able to get Kyousuke-kun up to the surface where he could walk free. But that was running away. You were merely indulging yourself because you couldn’t bring yourself to expose your weakness to him.>

“…Then what was I supposed to do?”

This went too far and the emotionless White Queen’s meter began to turn once more.

It turned toward the emotion of anger.

“In that garbage dump of a dark underground facility, my perception was distorted so I believed everyone was my beloved brother. What were the countless mes supposed to do when we had our love used against us!?”

<That should be obvious.>

Meanwhile, Shigara Masami spoke with pity in her voice.

She slowly shook her head before such a powerful being.

She breathed a heavy sigh.

How had it managed to get so twisted?

She seemed somewhat exasperated by that boy and girl’s destiny.

<Or to sum it up: help me. If you had just confessed that, you would have been saved.>

She was not allowed to continue any further.

That being seemed to physically swell out from within. The pure white clothing containing her beautiful body rippled and formed countless fearsome weapons: swords, guns, spears, crossbows, axes, spikes, katanas, staffs, hammers, whips, etc. The Queen of two worlds used all of her authority to shut the insolent mouth before her. The twintail girl raised a wordless roar and unleashed absolute resolve from her entire body.

The guardian carrying Shiroyama Kyousuke did not hesitate any longer.

<Right now, you are like a hedgehog sticking out all its needles in fear of an unseen enemy. No matter how much power you display, I can see your shockingly soft underbelly trembling. Retrieve your purity, Queen. The original you – the you that would split the earth in two with a smile if it was for Kyousuke-kun – could slice me in two with a single hair.>

<That ugly weakness is not something you should show off to the enemy on the battlefield. That is something you should only open up and reveal to the boy you love more than anything else in the world. You keep saying you love him, but you have not let him see your true self. Kyousuke-kun has cried and screamed until he had worn himself down and he has continued showing off the world’s strongest smile, but how often have you turned away from him while acting so noble? How could you expect him to not misunderstand? It is true Kyousuke-kun is hopelessly stubborn, but you are also to blame since you knew how stubborn he is but you did not work up the courage to patiently explain it to him. Surely you could figure out that much. Didn’t you find it cruel to expose him to the world’s strongest thrashing just because you have a shy maiden’s heart?>

The White rushed in after being rejected as a hedgehog, but Shigara Masami did not move.

Freedom Award 3000, World Complete, had said she was not special.

<I am not afraid of you right now.>

It was the White Queen who was dumbfounded with a look of astonishment.

Shigara Masami did not have a scratch on her.

<I did not dodge that. You were afraid of harming Kyousuke-kun. Besides, your slender arms should be able to produce far more brutal destruction than those various hedgehog weapons. A part of you hesitated. You attacked him out of hatred, but then the intense regret rushed in and now you are desperate to justify what you did. Should I declare that foolish or smile at it as childish? Love is something you fall into – something you drown in. No matter what words you use to pretty it up, this was never something you could escape.>

She was like a fierce dog bound by an invisible chain.

The White Queen bared her teeth and unleashed a low growl, but she did not snap at the enemy before her eyes. In fact, she was pushed back by a strange pressure.

<Remember, White Queen. Remember what it was you felt in your heart at the very beginning.>

Someone made a statement to the cornered beast.

That summoner still held the injured boy and had once risked her life so the children could escape, so she was speaking from personal experience and not just idealism.

And she spoke to someone who had similarly chosen to fight the entire world for the boy she loved.

What was it that color had represented?

<Kyousuke-kun is off limits until you can do that. Queen, you were a global target of worship who was offered anything you ever wanted, so having just one thing out of your reach should provide enough shame and suffering to make each second and instant impossible to bear. Crawl though that endless hunger and thirst, constantly think about the one thing in this world you cannot have, and recall the true feelings in your heart. If you do not, I will forever stand between you and him. Even if he grows old and dies, I will not let you attend his funeral.>

With that said, Shigara Masami relaxed her shoulders.

And she gave a smile that was far too out of place when facing her enemy.

<Don’t worry. A maiden in love has been the strongest force in every age. If you put your mind to it, you can easily clear this hurdle☆>