Ending X-02: Find a Way Out of Certain Doom[edit]

“I will side with the boy. But I will not explain why. It’s too embarrassing!!”

Find a Way Out of Certain Doom

The thing expanding across Kingdom F’s border was not an explosion or a dome.

It was a cocoon.

It was a medium for letting something grow.

And the Sword of Truth, which was the White Queen’s battle costume, was a force used to ensure she was always right. It would make white black or vice-versa. To do that, it would automatically fight and bring victory to its master. If it lacked something, it would construct that something to make all the necessary preparations.

So when the cocoon suddenly opened, how many people were truly capable of gazing directly upon its contents? Most would have simply seen it as a massive white light. When not protected by the Blood-Sign System, it was difficult to see such a great spiritual and divine presence. It would only appear as a light unless you were Sekurtiti or someone else who had taken a step outside humanity without relying on the Blood-Sign System.

It was more like a meteor shower launched from the ground.

Something frightening was released away from the puny planet.

It had responded to its original master’s desire.

It was offering her a true sword.

It was a white bolt of lightning.

The human clothing the White Queen had worn was obliterated.

And with an energy resembling electricity, she was joined with…

In one corner of the hellish shopping center, someone could not contain their laughter as they watched those two enveloped by such great power.

That demon helped others take revenge and pushed them to take it much further than they had intended.

She held her body in the provocative waitress outfit and a tremor ran along her spin.

She had always had a consistent reason for helping the White Queen with her love life.

Unlike Shigara Masami, Biondetta had realized early on that Kyousuke’s longing was for a family’s love, so she had set things up to fail.

Her objective was plain as day.

She did not particularly dislike Kyousuke. Or the White Queen.

Only one thing mattered here.

(It was my client, Shiroyama Kyousuke, who asked to sign a contract with me.)

What had that boy decided to do when he dragged her out of that Government truck?

He had sold his soul.

There was a common flaw shared by most everyone who made a deal with a demon: they were too focused on the short term and neglected to consider long-term losses.

She had no reason to feel disappointed.

She had been like this from beginning to end.

(So I need to produce the best possible revenge for you. When you make a deal with a demon, you don’t get to back out when the time comes to pay up.)

Without Biondetta, he may not have survived this long.

But without his contract with her, this would not be happening now.

As a vessel, Meinokawa Aoi had been able to view it all from a more detached position, so she noticed Waitress Demon Biondetta holding her body and trembling.

Accusing her now would accomplish nothing.

The sparks had already been thrown and it had already grown into a giant wildfire. Attacking the culprit now would not make the conflagration go away.

(Although I will give her a solid punch once this is over.)

Aoi made a mental note of that, but her biggest concern lay elsewhere: Shiroyama Kyousuke.

(That fool. Is this what happens when someone is never given any real love? A family is not always given to you unconditionally, but it is possible to make one yourself.)

This was not a political marriage of an older age.

Could a family be started from something other than love in this day and age?

(We still have a chance.)

The world had been ignited.

But Meinokawa Aoi still had a thought as she retightened her sarashi.

(His values are shockingly immature and childish, but I can still reach him. Accept it, boy. You desire love more than anyone, so just accept the simple fact that someone is offering you love right here!!)

A storm had blown in.

As the wind pummeled her, the shrine maiden held her silver hair down with a hand and called out to the enemy group.

Specifically, to Shigara Masami because she seemed the most reasonable.

“What do you want to do about this!? Which side are you taking!?”

<I can’t take sides here! I want happiness for both Kyousuke-kun and the White Queen. So even if she’s lost control, I can’t choose to abandon the White Queen!!>

(That’s what I wanted to hear.)

Meinokawa Aoi had pushed Kyousuke to this point. So no matter how pathetic, pitiful, ugly, and beyond reach he might seem, the silver-haired shrine maiden had no intention of leaving him all alone.

“I will side with the boy. But I will not explain why. It’s too embarrassing!!”

They made no mistake here. The two of them were enemies.

But Meinokawa Aoi still smiled fiercely at the woman in a suit and lab coat.

“Neither side needs to hold back. Let’s give this everything we’ve got. It’s too late for tears or regrets!!”

Somewhere in this world or the other, someone gently opened her eyes.

It was a small translucent girl. She looked to be around 10. A faint light at the center of her chest flashed in time with her heartbeat. A portion of her long hair stuck up like cat ears and her undeveloped body was contained in something like a leotard. Swords, spears, guns, axes, staffs, hammers, chains, katanas, and other weapons surrounded her hips like a long skirt and 12 thick tomes recording different ends of the world floated in a ring behind her back.

In order to kill the White Queen, she was preparing for battle to match the growing strength of the cocoon, but the actual trigger was found elsewhere. 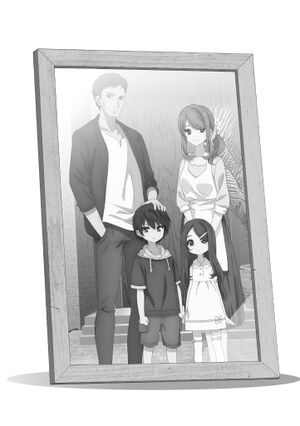 Had the boy even noticed?

He had gathered everything necessary to defeat the White Queen, but had he noticed what kind of energy had been mixed in?

<Nii-sama, I will protect you this time.>

Thinking back, that was all this Unexplored-class had ever tried to do.

Even though the psychogenic shock of actually destroying the White Queen had created an unexpected error, this one part of her had remained.

<Now that I’ve been reborn, it’s my turn to help you, Nii-sama.>