“Are you familiar with the term Intellectual Village?”

The girl before me was getting cocky for a Zashiki Warashi. She must have missed having music because she was using my smartphone without asking again. She may have been getting carried away due to being the kind of black-haired beauty that looked perfect in a red yukata. She was certainly too glamorous to be called a “child”[1] and liked going on walks despite being a Zashiki Warashi. In a way, that was the worst possible combination. Was that Youkai trying to bring my house to ruin whenever she walked to the sweets shop?

“Of course I am. I live in one. It’s a high class branding of the concept of ‘rural’. They’re proposed by three star hotels or famous department stores and publicized by advertising companies. Thanks to that, a third of the country was redeveloped and had its primary industry completely changed,” I replied in annoyance.

Please, just let me eat my popsicle before it melts.

“Wakayama’s wood industry, Akita’s rice farming, and Yamaguchi’s fishing industry. All the rural areas of the country were changed. This is one of those places. The official reason given is to curb rural depopulation by having people move from the cities to the country. But who’s gonna live in this expensive land? In reality, they know they can’t beat the cheap imported goods, so they’re trying to isolate us. They’re selling things based on high prices, safety, and high quality.”

“I heard that those cities with a concentrated population of a hundred million aren’t due to rural depopulation, but due to people not being able to live in rural areas. With the ecological and health booms, a house here in Noukotsu Village is more of a trophy than an overseas villa.”

“The beef and fruit are especially amazing. One bunch of grapes is 30,000 yen. Of course, thieves’ eyes will light up at that thought. That’s why the security network here is top class despite everything looking like you’re out in the country. An ion defense device has been constructed to prevent the brand-name genetics of the pollen blowing in from being raped. Just a honeybee net wouldn’t have been enough.”

“Earth, wind, water, grass, bugs, and fish. Everything around here has a price tag, doesn’t it? A liter of the water in the rivers here costs 300 yen. The lightweight trucks driving around are electric. The paths through the fields have lines of solar panels that change direction like sunflowers. AI machinery is used in production control for agriculture and fishing. Those who like to shop can do so via an optical communications network or the internet. The area is just a fusion of rural scenery and cutting edge technology.”

“The problem is this means the city doesn’t have a single convenience store. The deserted train station, the outdated sweets shop, and even this popsicle that seems like solidified shaved ice are all rare brand name items.”

“Don’t look so pleased with yourself after someone gives you a soda when you’re about to collapse from heatstroke.”

I was a bit worried that at some point a group of Zashiki Warashi would gather at a small school pool or somewhere and make a class change to Shichinin Misaki or some other kind of Youkai. With how irresponsible they could be, it wouldn’t surprise me.

“While Yamanba and Hitotsume Kozou may be, Zashiki Warashi are not an endangered species. In fact, thanks to the favorable treatment you get, like doves in rural parks, there are actually an excessive number of you around the country. I’m betting someone moving into a new apartment finds one of you in there about as frequently as they find the previous resident’s microwave.” 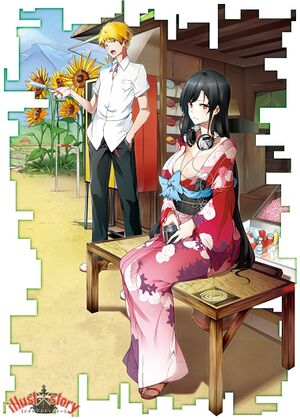 “Oh, you just don’t understand value. I’ve heard talk of the domestic occult eventually being exported at a high price.”

“Why would anyone want a Youkai that does nothing besides steal your futon at night?”

“That pinup magazine!? D-did they even get 100 different types for the entries?”

“The possibilities of e-books are endless.”

“You bought that with my smartphone again, didn’t you!? I can’t believe bitches like you got 1st!”

“…Ho hohhh. You’ll find us all over the place. These rural areas around the country known as Intellectual Villages also function as water supply points for the domestic occult travelling between areas.”

“For example, there is that mysterious old man dressed like a baby who has been clinging to your back for a while. …Is this an example of that extremely major type of Youkai?”