A certain incident had ended.

However, that did not mean the deadly Youkai known as an Aburatori had been defeated.

Like a stopped heart beginning to beat or a corpse having the breath of life blown into it, the beautiful woman in a white kimono let out a large breath. This happened below a metal bridge in rural western Tokyo where nature still remained. Like a heart massage, the vibrations of a train running by overhead shook the beautiful female body collapsed on the embankment.

“That was close. Far too close. If that had been my real body and not a copy I sent to the past, I really would have been in trouble. I would undoubtedly have been annihilated there.”

The “proper time” for the Youkai called an Aburatori was two days after the incident.

To someone who could freely move through time, the continuity of past, present, and future had grown thin. Having a past self injured did not necessarily mean receiving the injury in the present. The Aburatori would never die unless this “main body” was lost.

(I did manage to extract the Ver. 39 Zashiki Warashi by dragging it from the copy.)

A staticky noise filled the air.

The Aburatori blinked back and forth between being the beautiful woman in a white yukata and the wrinkled old man like a fluorescent light about to die.

(My power… I am losing the power to control destiny! Do I need to revisit that village and acquire it again!?)

A figure slowly approached the Aburatori.

The figure wore a white kimono and had long hair.

She was a female oni with bluish-white phosphorescence residing in the tip of the knife-like horn growing from her forehead.

“Hi there. You seem to have been spreading quite a lot of fear. You’re going to make me jealous like that.”

“An Aoandon? What is a newcomer like you doing here?”

“You say that, but the legend itself is actually pretty old. Of course, it is true I was only put together quite recently.”

This female oni called the Aoandon had been semi-automatically assembled in a certain incident centered on Four Mountains Village aka Zenmetsu Village. She was the Youkai said to appear once the Hyakumonogatari was completed in full. Unlike a normal deadly Youkai, her species had a unique trait.

The Aburatori who looked like a beautiful women tilted the head hidden by the conical hat with a single large eye symbol.

“Why are you here today?”

“Well, I’m currently gathering members. That’s why I’m here. I’m glad I only had to go to western Tokyo for that. The city center is just plain exhausting.” 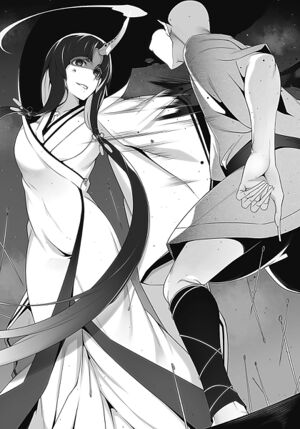 “No, I have no need for trash like you.”

For an instant, the Aburatori could not understand what she had said.

And it happened a moment later.

Blood rose in the Aburatori’s throat and quickly flowed out the Youkai’s mouth.

The Aoandon’s slim arm had pierced through the Aburatori’s chest. Bluish-white phosphorescence continued to glow from the tip of the knife-like horn and her expression did not change much at all.

“While I am here to gather members, you are not my target. I suppose you could call this a small detour. I saw something I just couldn’t overlook, so I had no choice but to kill you. Troublesome, isn’t it?”

“Wh-what? Don’t tell me you are angry…that I am a Youkai that abducts and kills…human children? There is no need to follow…all of those ridiculous rules…humans have made…”

“No, this has nothing to do with the children. In fact, it’s almost always ignorant children who bother completing the troublesome Hyakumonogatari ritual. It would be silly of me to be angry about that.”

“Because there’s nothing new.”

The Aoandon erased all expression from her face and answered with scorn mixed into her voice.

“You gained the ability to freely control time, space, and destiny, but all you tried to do was kill children. That’s no different from before. …If you had tried to create a kingdom of only Youkai, annihilate the human race, or accomplish some other unprecedented challenge, I would have clapped my hands and helped you.”

“Did you just decide to relax because you have no concept of a lifespan and have infinite time to work with? But if you aren’t going to change, there’s no difference between existing and not existing. In that case, don’t keep living. Disappear. If you’re going to insult yourself, you deserve a suitable fate.”

The Aburatori gave a blood-filled scream with an arm through the chest.

That deadly Youkai shaped like a beautiful woman in a white yukata produced dozens of metal skewers to eliminate the newcomer at close range.

“I am a special deadly Youkai that rules over the Hyakumonogatari.”

The Aoandon did not bat an eye.

There was no need to move.

She had no connection to fate like the Zashiki Warashi or Jinnai Shinobu, so her fearsome level of power could be seen in the mere fact that she had managed to contact the Aburatori so easily.

The Aburatori was a special Youkai that could easily attack others but that others had an incredibly hard time contacting.

“I exist in the leftover space beyond the one hundred bloody ghost stories.”

The giant organization of Hyakki Yakou was named after a special concept. That concept was a strange phenomenon in which one hundred different species of Youkai would form a line and walk through the night. This Youkai had singlehandedly taken in one hundred ghost stories, so she had reached that same level on her own.

“You are no more than a single fear, so did you really think you could harm me?”

A young man changed trains and travelled to western Tokyo.

After crossing a giant metal bridge, the train arrived at a run-down station.

He left the ticket barrier and looked to the surrounding mountains. Even a small breath was enough to feel a green scent fill his lungs. He also saw a thick ocean of trees that anyone in an underground business would naturally imagine had a corpse or two buried in it. In fact, it had apparently been the stage of a recent incident involving Jinmensou.

He glanced at his cellphone.

The screen displayed a 1seg news broadcast. The crimes of a large criminal organization were coming to light and a lot of people had been arrested. Countless camera flashes filled the screen as a suspect with his coat over his head was taken into a car by the police.

The young man’s eyes narrowed when he saw the large police officer.

He put away the phone and looked around once more. He carefully observed the series of mountains and focused on one mountain in particular. He continued on foot toward that green mountain. He left the asphalt road protected by a guardrail and made his way into that unexplored area thickly covered by trees and underbrush.

He reached a hand into his pocket, grasped something made of hard metal, and pulled out a small handgun.

That gun had once killed someone.

Everything was finished, so he would now die by that gun.

He had been planning this for a long time, so he did not hesitate. He grabbed the grip cover that was shaved down small enough for a child to hold and he pressed the muzzle against his temple. His expression did not change as he simply went through the motions.

The young man initially looked confused as he turned toward the voice.

He was approached by a female oni in a white kimono and with a knife-like horn growing from her forehead.

“I only took a quick detour! I’m not about to lose the whole reason I’m here for something like that. Please hear me out.”

“I am the Aoandon, the final boss. Nice to meetcha. Oh, and I know more or less what you’ve done. I thought it was interesting, so I decided to invite you to be one of my members. How about it?”

“I’m not sure what I’m supposed to say. I was just about to die.”

“That’s the thing.” The Aoandon snapped her fingers. “It’s too soon to die. Can you really say your revenge is complete?”

“I mean, yes, you destroyed one of the four major networks. Whether we’re talking about the original incident or the one someone changed it to, I don’t think any secret leaders of the group escaped or anything. But still, is this really over just because you crushed a large criminal organization?”

“What caused it all in the first place?”

The Aoandon asked a gouging question with the innocence of a mischievous child.

“I’m pretty sure I know what you were thinking. Evil is running rampant, evil is stronger and that’s why the powerless good was lost. That’s why you made up for that lost good by destroying a great evil.”

Her lips then formed the word “but” to reject all that.

“But I don’t agree. It is because good is powerless that evil runs rampant and power gathers in evil. The large criminal organization was not the only cause of what you did as a child. If the old detective who was sacrificed had been stronger, it never would have happened. You would have been saved.”

The young man then moved.

He removed the gun from his temple and pressed it against the center of the Aoandon’s chest.

The Aoandon was still smiling.

Her expression seemed to predict the destruction of whatever paranormal power might be contained within the bullet. 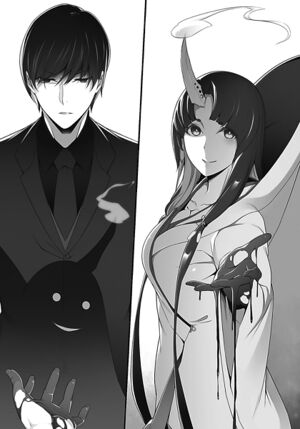 “I am a deadly Youkai that absolutely loathes stagnation and the status quo. So…so you see? If you wish to change the world, I will clap my hands and help. Your revenge will not end with only defeating evil. It will only come to an end once you exterminate that fragile good and replace it with powerful justice. That will get back at everything that led to your suffering.”

“So what will you do? If you wish for stagnation and escape, that’s fine. But you don’t need to commit suicide. I’ll kill you myself with an extra serving of contempt. Which would you prefer?”

He had thought fewer people would end up like him if he destroyed that great evil. But he had been too naïve. If good remained weak, it would fall prey to something else eventually. His actions had changed nothing. He would have left behind a few pieces of self-satisfaction, but the cycle of tragedy would have continued.

“I understand your point and I admit it is at least more worthwhile than killing myself here. …So where do we start? After bragging like that, I assume you have some specific methodology in mind.”

The Aoandon arbitrarily looked up into the heavens and raised her index finger.

“First, how about you tell me your name? I of course already know it, but I want to hear it from you.”

“Saiki Kazu. I am a former assassin, former fortuneteller, and former suicidal man, but now I am simply unemployed.”