Even that simple fact filled me with emotion.

My uncle, the Mystery Freak named Hishigami Enbi, her sister Hishigami Mai, and the Sunekosuri had all gathered with the rest of us. We were a bit up the slope in the clearing near the tunnel entrance.

Incidentally, the entire situation was quickly settled as soon as the effects of the Amanojaku wore off. Hyakki Yakou’s girl leader and her bodyguards had suddenly rushed in toward the villain as if they had suddenly remembered something.

The miniskirt maid herself, whose name was apparently Hasukawa Yumi, was kneeling down with everyone surrounding her.

Hishigami Enbi, who was hiking through the mountain in a bunny suit for some reason, frowned and spoke.

“Eh? She was behind it all? So does that mean the CIA was the one killing freelance writers with malfunctioning electronics!?”

For some reason, my annoyed answer led the middle school bunny girl to pout her lips and start complaining. She seemed to be the type who didn’t like to have a CIA agent, an exorcist family, or a god on the dramatis personae.

But that was her problem.

I had to do what was left for me to do.

“Hey,” I said to Hishigami Mai. “Do you have a random blade? A knife will work.”

She pulled a disturbingly long and skinny blade from the side of her boot and held the handle out to me. The single-edged blade was over twenty centimeters long and it looked like a sashimi knife customized for killing.

“But what are you going to use it for? Do you feel like finishing off the villain yourself?”

“No, that isn’t it. There’s still one mystery remaining.”

“The Amanojaku. That Youkai is the cause of all this, but where is it?”

I held the knife tight as I spat out the words.

“It’s supposed to correct reality based on the Singer Song Liar story, but that isn’t enough for everything to go according to the CIA’s plan. They were simply using my story to their own ends, so the story itself isn’t enough. They would first need to make me create the song they wanted so the story they wanted would be made.”

One only had to recall the traits of the Amanojaku.

It was a symbol of lies that answered any question with a lie.

It would read people’s minds and mimic them to surprise them.

It would pull simple pranks, yet it was also a deadly Youkai that would kill people, wear their skin, and take their place.

And most importantly, when Hasukawa Yumi wanted to make a correction to their plan, she had tried to capture me. Why would she need me to interfere with the world of lies constructed by the Amanojaku?

“They used its trait to read someone’s mind and mimic them to create an input and output point for reading and writing the contents of my mind. It’s obvious where something like that would be hidden. Especially for a Youkai that can wear people’s skin to disguise themselves.”

There had been a certain sign every time I had recalled the Singer Song Liar story.

There had been some itching movement there.

I brought the narrow and sharp blade of the sashimi-style knife to the side of my head.

I heard a brief shriek in an unfamiliar voice, but I ignored it and moved the blade further.

I had no idea when “this” had started hiding in my head. As soon as I had finished writing the song and story with Singer Song Liar? When I had arrived on the island? In the airplane? Or around the time the USB hardware key was attached to my suitcase before takeoff? But that wouldn’t matter as long I could remove it.

I couldn’t return to the normal world with “this” still in there. I was afraid to do this, but I had no way of knowing what effect leaving it would have.

I heard an unpleasant splintering sound as the strange wriggling sensation underneath my skin grew and expanded. This was not blood gathering. I could feel something far more out of place pushing out there.

I shuddered as I traced my fingers over its outline. I had assumed it would be at most the size of my little fingernail, but it was far larger. It was like a balloon being inflated to the limit. In no time at all, it had grown larger than my skull. I had known Youkai didn’t obey the laws of physics, but wasn’t this a little much? What had happened inside my head with this shoved inside!?

With the sound of gas bubbling up from a swamp, “it” completely separated.

It was less than a meter tall, so about the size of a fair-sized child. It was small for a person, but I was pretty sure it was a world record for a tumor. Two horns seemed to split through the disheveled hair. Its sex was difficult to judge through the thin kimono, but as a symbol of lies, it may not have had a definite sex.

It only gave a creepy laugh and gave my face an upturned glance.

Oh, I get it. This is about what I would expect for a contrarian Youkai that always answers with a lie.

It was truly the source of everything that had happened.

However, it had only been used by the CIA and it had meant no harm itself.

I staggered and waved my bloody hand as if shooing it away.

“Go disappear somewhere. We have no need for you.”

It looked like a kid, but its response was full of impudence. And with that, it ran into the dark forest without looking back.

They’re supposed to always answer with lies, so does that mean it’s actually thankful?

I wondered that as I returned the human carving knife to Hishigami Mai.

That was when a great din reached us as a large transport helicopter approached and landed. I assumed it was from Hyakki Yakou, but it wasn’t. It belonged to the same country that had manufactured it: America.

Hasukawa Yumi winked at me with her hands still clasped behind her head.

“I lost this time. Not killing me is sure to benefit you in the future.”

“Don’t forget that I let you go. Don’t try anything on us again.”

“We won’t. That alone I can promise you.”

She slowly stood without removing her hands from the back of her head.

She was demonstrating her confidence.

She smiled at me with men in military uniforms standing on either side of her.

“I will be leaving this country for the time being. I feel bad for leaving behind those on our military bases, but if I stay here any longer, I will undoubtedly get dragged into the blue light issue. And it will be too late to escape once that happens.”

“Wait a second. What are you talking about? The blue light?”

“Didn’t I explain that this was all for your sake and for your country’s sake?” 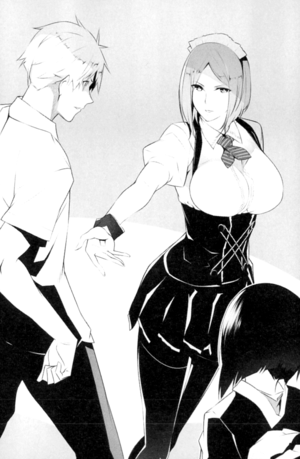 The helicopter rotor nearly drowned out her voice.

That was how hopelessly transparent that angelic voice was.

“The CIA failed. The higher ups are not going to be happy about this. It looked like the NSA and FRB were only thinking of stopping any influence that reached our shores, so you just lost your final chance. …Things can only come tumbling down now. I tried to stop the blue light, but your country didn’t want that.”

“Again, what are you talking about!? What is this blue light!?”

“It was to be your country’s fate to sink without ever knowing that, but I do owe you. Just this once, I’ll give you some information.”

As she left, Hasukawa Yumi held out a memory card smaller than a stamp.

The soldiers around her did not stop her.

They then boarded the large helicopter and flew off into the night sky. It was like they were trying to escape the mountain before it was engulfed in a forest fire.

I was overcome by a strange sense of unease.

The small memory device in my hand felt far too heavy.

I took back the smartphone stored in the Zashiki Warashi’s cleavage and stuck the memory card inside.

The data was filled with English and my textbook knowledge of the language wasn’t nearly enough. It was a perfect example of test scores being of no practical use.

“119th Eastern Strategy Report… An inadequate counterintelligence system… An enemy from within… Risk simulation of a large scale terrorist attack in the near future… A negative chain reaction in the world economy produced by the fall of a single nation… 99.9%... Countermeasures… It is necessary we immediately reform the defense system even if it means temporarily taking administrative control from the Japanese government…”

Even the fragments I heard were enough to tell this was no normal report.

“What does that mean? Were the CIA and America trying to take over Japan to protect Japan? So is there some true enemy somewhere else?”

They had decided those extreme measures were necessary to deal with this enemy.

And that enemy remained untouched.

America had retreated without dealing with it.

So what did that mean?

What was going to happen to us...no, to the land we called home?

“The assumed enemy is a Japanese Spirit…a Youkai…”

Hafuri then spoke a single name.

An unpleasant sensation ran through my entire body.

That was not just a codename. Japanese Youkai sometimes had names that couldn’t be accurately represented in English. They were probably only using that strange name in place of its original name.

That was something we knew very well.

I recalled the name of the hopelessly deadly Youkai that we had created.

“Is this referring to the Aoandon!?”

I raised both arms to stretch my back.

Yes, it was such a nice popping feeling. My back didn’t actually make a noise, but that was the quickest way to describe that liberating feeling!

The national alteration Package using the Amanojaku had been quite a formidable foe. If it had been completed as my rival, the coming competition would have gotten a lot more interesting.

But the country had rejected their own savior.

That meant things were going to be more boring. Such a shame.

Not only would the sun be lowering in the sky for them, it would be vanishing beyond the horizon.

“Whoever our enemy is, our preparations are complete,” said an emotionless voice.

It came from the man standing next to me, Saiki Kazu.

From my point of view, I guess he was the human representative. A Youkai couldn’t draw out all of its power alone. I needed a convenient human around for the techniques only they could use.

“No matter what we set as our hypothetical enemy, it is logically impossible for it to shake the system we have set up.”

“I know. That’s why I’m so calmly daydreaming about all the different possibilities.”

I giggled as I answered. 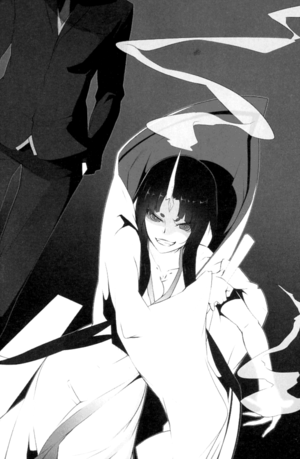 A short form was running through the dark forest. It seemed to be an Amanojaku. It looked concerned by our presence, so I gave a quick wave.

“I am the condensed form of one hundred fears with more to spare, so if a Package including me is assembled, it really will change the world☆”

I pictured a few faces in my mind.

The one that had left the strongest impression was of course that boy.

That one trump card who had once driven me almost to death.

“Now, how about we put them in checkmate?”

I smiled and urged the man along.

“Let’s fulfill the fears the people desire and answer their calling voices.”