Humanity could no longer escape the vortex of information.

Television and radio signals poured down over even the most rural-looking scenery. An internet environment was maintained with cellphones, Wi-Fi, and LTE. Security networks were built up with security cameras and event data recorders. Weather forecasts were sent over satellite broadcast and GPS. There were police and firefighter radios. Aircraft and ships had control systems. Even the ham radios used by a great variety of people added to the invisible vortex of information that dissolved right into the air. It filled every nook and cranny of the human world, so it was nearly impossible to find a clear bandwidth.

It was unclear what medical basis (if any) that rumor had, but it may have been a representation of the concerns held by the current age.

A girl’s voice too bewitching to call “cute” sounded in the middle of a metal and concrete city.

Compared to the storm of information that blotted out the world, this was but a minute grain of data.

Then again, information had always been about quality, not quantity.

At that time, it may have been best if the nation had set aside all else and focused on the information being produced here.

“More rumors are created and destroyed in these places than anywhere else in the world. For me, this may be like visiting my ancestors, but the big city really is exhausting.”

Her clothes resembled the white kimono of a bride.

She had long, bluish-black hair and a single knife-like horn seemed to split the bangs on her forehead. Bluish-white phosphorescence glowed at the tip of the horn.

Her childish face was belied by the glamorous figure that was noticeable even through the kimono that tended to hide one’s frame.

“But given what we’re going to do, it can’t hurt to take a look just this once. Ugh, I’m feeling dizzy.”

She was unique even among the deadly Youkai.

It was assumed she would be built up by human hands.

She was the blue oni that appeared at the end of the Hyakumonogatari and caused so very many supernatural phenomena.

Even after bringing together those one hundred fears, she still reigned supreme.

A voice reached her from directly behind.

The deadly Youkai named the Aoandon looked back into the crowd and saw a skinny and nearly expressionless young man wearing a dark suit.

His name was Saiki Kazu.

He was a member of her group. This skilled user of the supernatural arts had misused an Aburatori Package and singlehandedly destroyed a large criminal organization with an international reach.

“The assembly is complete. We have no reason to stay here.”

“You did? Really??? But I’m still feeling that sharp pain.”

“I only use Youkai. I don’t change their fundamental nature.”

“Oh. I wonder if this is what menstrual cramps feel like.”

Saiki responded to her joke without moving a single eyebrow.

The Aoandan pouted her lips.

“Then I guess it’s time to put this country in check. And I’m still not sure whether I should call it Nihon or Nippon.”

“That kind of ambiguity is exactly what creates an opening for us.”

“What are the other members doing?”

“They are all waiting for your orders.”

“Yeah, some of them can be difficult to control. How’s Kada-chan doing?”

“Everything is at normal levels.”

“That one has been crushed and taken in.”

She did not seem to mind too much.

Saiki Kazu’s expression remained unmoved even with his ominous answer. 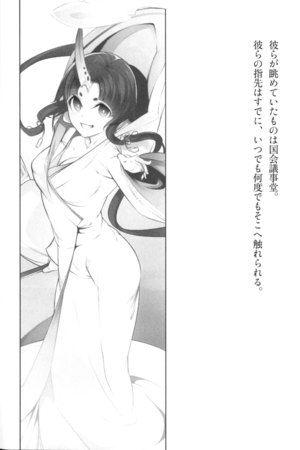 “But at the current stage, they have only been placed inside the Aoandon Package. The pieces needed to use it properly are still missing. Do you have any ideas concerning that?”

“Not to worry. This is the last train and the departure bell is ringing, but we still have a chance to jump onboard.”

“You’re leaving the very last part up to luck?”

“We’ll win regardless.” The Aoandon grinned. “Coincidences aren’t determined by luck. It’s set by destiny, karma, and fate. So if our success has already been decided, everything we need will gather around us on its own. Just like the man named Saiki Kazu appeared before me when I wanted someone skilled in the supernatural arts.”

“If I wasn’t going to succeed, I wouldn’t have been successful from the very beginning. The situation is already underway and you could say it’s been proven that no one can stop it once it is. You can leave it up to luck or pray to the gods if you want. No matter what miracles you carry with you, you can’t change the end result once you find yourself in front of me.”

That may have been why she so readily turned her back on the target she had been staring at this whole time.

She did so as casually as someone leaving a neighborhood friend’s house they could return to at any time.

“We’ll see each other again before long,” said the blue oni girl.

Saki Kazu followed her in his dark suit.

They were standing in the Nagatacho district of Tokyo’s Chiyoda Ward.

They had been looking at the National Diet Building.

It was already within their reach whenever they decided to reach for it.