A lot had happened.

Hyakki Yakou had clashed with the Aoandon’s group. Noukotsu Village – the Intellectual Village where he lived with his parents, family, classmates, and the Youkai he knew – was in danger of being destroyed. He had defeated Archdemon Tselika, the Aoandon had stabbed him through the chest in return, and he had been sent back in time using Hyakki Yakou’s time travel Package. He had learned the truth of a ten year old incident, rescued the Aburatori as he was about to fall into the abyss, and returned to the present for a counterattack against the Aoandon. He had defeated Saiki Kazu, who was more of a monster than the Aoandon in a way, and the problem had come to an end.

The appearance of Previous Hyakki Yakou Leader Majina, Ohatsu the (female) Sunekosuri, the Hyakki Yakou Special-Made Ver. 40 Zashiki Warashi, and Hishigami Shikimi had been unexpected, but that could not be changed now that it had happened. He needed to change his line of thinking and prepare for the next battle. 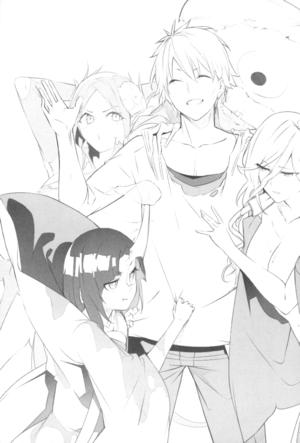 With Hafuri as the leader, the Aoandon would be spared.

With Majina as the leader, the Aoandon would be killed.

But for the time being, the fighting was over. Who could say how long Hyakki Yakou would remain in one piece, but it had left the village and the strategic stealth bombers were no longer flying overhead.

Most of the Aoandon’s group had surrendered to Hyakki Yakou. Some, such as the Oomukade and Ranzono Sachi, seemed to have slipped away, but they were making up for their crimes in their own ways.

Regardless, no one remained to destroy Noukotsu Village.

It was unclear how long the peace would last, but for at least one day, he could climb into his futon and sleep peacefully.

The Succubus, Marguerite the Witch, the Aburatori-turned-Kaeshigami, and (for the time being) the Aoandon needed somewhere to go, so Jinnai Shinobu brought those paranormal beings back to the familiar thatch-roof house with him.

He had thought he might never set foot in that house again, but he did so once more.

He opened the door and stepped inside.

The boy’s body and soul were utterly worn out and he greeted the Youkai who he had been with since birth, if not even before.

He did not even need to bite his thumb.

He gave the greeting he knew that other boy would have wanted him to give.