This title is too long!:Volume1 Afterword

Hello everyone. This is the author Keiichi Sigsawa. Thank you for purchasing this new published work—

"I'm a High School Boy and a Bestselling Light Novel author, strangled by my female classmate who is my junior and a voice actress I — Time to Play, First Half'.

The title of this book is so long a single line can't contain it. Well, since it's already so long, i should have crammed it all into two lines. Can I cram it into 2 lines instead? (Editorial branch note: Please start with the afterword already).

"I'm a High School Boy and a Bestselling Light Novel author, strangled by my female classmate who is my junior and a voice actress I — Time to Play, First Half'. (This title is long, so I'll simply shorten it to 'this story' from now on)

This is a new series I released after a long time.

Speaking of which, I've been an author for 14 years, but in terms of novels, I only managed to write two series that include 'Kino's Journey' (and 'Kino's School'. No objections allowed', 'Allison' (including the sequels 'Lillia and Treize', 'Meg and Seron', 'All the stories in the Story of A Large Continent series'. Even I was surprised by that. The first volume of 'Allison' was published in 2002, while the first volume of "I'm a High School Boy and a Bestselling Light Novel author, (etc)' is actually a completely new series released 12 years later. It's surprising that it's been 12 years. An entire zodiac has already passed!

And thus, as per usual, it's okay to read the 'afterword' of this volume as usual since it doesn't reveal any plot. However, is it okay that the plot's already revealed that much in the title...? Well, it can't be helped.

Now then, it's time for the afterword, so please allow me to be a little more passionate in discussing this story. Since I'm an author, I'm very familiar with this work.

The original idea of this story was formed about 4 years ago from now, in other words, from 2010. That was when I first came up with the plotline for this story, and it was March 30th.

Of course, I came up with the plot file because 'I thought of it', and it originated from a 'dream' (The dream here naturally refers to the one everyone sees when they sleep)

There was a dream I had ever since I became an author.

How it felt to me was,

"I'm in a high school (or college) classmate, and I couldn't get along with my classmates as I haven't been to school for a long time, so I could only feel isolated and lonely. However (for some reason), as I'm an author,

That was what I would always mutter to pass off my loneliness.

I suppose everyone can tell from this heartwarming, fleeting episode how distant I was from being a 'Winner in Life' during my student days, and there was nothing I could brag about myself until I became an author. I'm definitely not crying here.

However, it was only on this day (March 30th, 2010) that this dream was a little different. Nobody knew that I'm an author, but there's one female student who suddenly talked to me.

I forgot what were the exact lines, but she did say,

"I'm a voice actress, and I know your true identity!"

Once my jaw dropped (speechless) in shock, I opened my eyes.

I got up, and sent myself a message using the phone placed by my pillow.

"A story of a high school boy as an author having his secret known by his female classmate who works as a voice actress!"

Yes, that was the moment when the story was born.

Once I got to my work room, I immediately sat in front of the computer.

Typically, I'll sleep till noon...so I really was just awake back then. Please do not imitate the lifestyle of a professional author. It may damage your body.

And then, using that dream as the basis, I continued to add on to the ideas I thought of. I revisited the diary that day. (I'll typically enter my diary entry into the computer every day), and I found out that I did have such a thing recorded. The following's what I copied from the entry:

It's a dream of me as a high school student, a distant dream of walking towards my high school.

I often had this dream, but it's different this time; there appeared a girl who works in the voice acting industry.

And so I thought of a story, and recorded it.

Also, I did leave this message on twitter. That was when I copied it too.

I quickly glossed over the idea of the dream I saw, and though I didn't know how to write, I thought it was interesting (or that was what I thought). Such occurrences were common, so I often had some sort of a recording device placed beside my pillow. Once I woke up, I would send a message to myself immediately.

This story would not have happened. The majority of those who know the contents of the story and read the title would probably think,

"Hey, hey, Sigsawa! You just want to write your 'dream' as a story here, right?"

In fact, yes, the inspiration came from my dream! It's because this is based on my dream that I'm able to write such a dream-like story! If there's a category in wikipedia called 'a work the author conceived in a dream', please add this work to the category! Yes, I'll leave it to you!

For added precaution, I'll state beforehand that the basis of the protagonist isn't me. I couldn't write a single novel in high school. This protagonist's just my aspiration, a 'dream-like' setting. To be blatant, I'll say that the story itself is a fantasy, more fantastical than 'Kino's School'.

However, whenever i mention the profession of an author or Dengeki Bunko in this work, I'll use my various experiences.

"Eh! So a light novel author will collude secretly with the Dengeki Bunko editorial staff!"

I'll be very pleased if everyone's able to think this way after reading this story (Editorial branch: can't you please use another, amicable way of stating this?)

I have to clarify further that the basis of the heroine doesn't exist. I did search through the internet when deciding her name so as to avoid involving any actual voice actresses, and this is the reason why I chose this rare, unpronounceable name. If there's really a voice actor or actress rookie with the same names, I do apologize deeply! Please allow me to use this chance to apologize to you! I'm say! 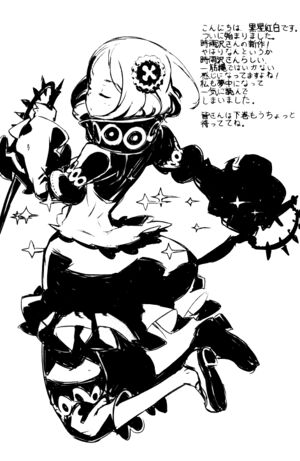 The story was actually written starting from August 2013. In other words, I had this idea brewing for more than 3 years,

I can't really remember when it was (I didn't record this down in a note), but the story just so happened to change. To avoid revealing the plot, I really can't say what sort of change happened in the story...and the story so happened to end up like this after I concocted this for so long.

Now then, as for why I actually started to write this story so suddenly—

I once had a premonition that light novels with protagonists being light novelists would continue to increase. And then, though I'm not stating any examples, there is an increase in such works, and it has becoming a recent trend.

Looking at this, it'll become a new genre by itself, like 'schools with unique abilities', 'demon kings' and 'little sisters'.

Tragically, I thought of this three years ago, but it's likely that people thought I only caught onto this fad later on! Now's the time to publish it! No time to waste!

That was how it was—and so I suddenly made up my mind to write it at a very fast pace. The last time I wrote so much and so long was probably when I submitted my entry for 'Kino's Journey'. How wonderful.

Finally, when I was done, I found out that the number of pages far exceeded my expectations, so what was supposed to be summarized in one volume ended up divided into two. I do apologize for not planning this thoroughly beforehand.

The next publication date will probably be the day when the Earth rotated 60 times from now (editorial branch note: Can't you just express it in 'two months later'?). There is still some time, so please sit with your abdomens raised and wait (Editorial branch's note: your body balance will be off if you do not train your back muscles at the same time),

The afterword of this First Part thus ends here. Sorry that I'm being 32% more serious than usual (compared to myself). Allow me to state beforehand that there is no continuation of the afterword inside the cover; do check around to see if there really is any.

See you in the next volume, when the Second half is published in March!