This title is too long!:Volume3 Afterword

<<I'm a High School Boy and a Bestselling Light Novel author, strangled by the obi of my female classmate who is my junior and a voice actress--Time to Judo-->>

The protagonist started to play judo for real, gradually impressed, and finally made it to the Nationals! However, the next submission deadline for 'Vice Versa' is closing in...can he continue tossing around while writing his novels!?

The startling stage shall be set on the tatamis, the plot of the 4th volume filled with manly sweat!

<<I'm a High School Boy and a Bestselling Light Novel author, forced to marry by my female classmate who is my junior and a voice actress --Time to Marry-- >>

The Protagonist managed to win silver at the Nationals, and submitted the manuscript on time.

As a famous person in school, he's popular with the girls too, beaming away. Nitadori's crying tears of blood, but she couldn't do anything as she told him to do it. At this moment, Miss Kamishiro brought some shocking news. That is, Nitadori's already 20, and has a prearranged fiance overseas!

A fire is lit under Nitadori, and she pursues the protagonist! Turbulent times in volume 5!

<<I'm a High School Boy and a Bestselling Light Novel author, having a war against my female classmate who is my junior and a voice actress --Time to Fight-- >>

The protagonist never noticed that Nitadori was trying to woo him. A fuming Nitadori finally transforms into the blond 'Super Nitadori' and starts to attack mercilessly! The protagonist uses the wardrobe he inherbits from his mother as a weapon, but is unable to completely withstand the attacks coming from behind him in class. When he was stabbed by the After Record script and about to die of blood loss, an unexpected person suddenly saved him--

80% battles, hardcore combat scenes! This is this 6th volume!

<<I'm a High School Boy and a Bestselling Light Novel author, and I feel my female classmate who is my junior and a voice actress doesn't exist? Is it all my own selfish delusions--Time to Realize-->>

The anime was aired successfully, and the protagonist returns to his lonely school life. Doing this, he suddenly feels empty within. “Eh? Who was I talking to on the train...?” Even though he muttered to himself at the last seat of the classroom, nobody responded. Was it all a hallucination? But what was with the icy feeling left on the neck? Why did I buy an Afghan Shawl?

Fantasy and reality, truth and convictions cross in this psychological drama. What did he find in the 7th volume?

<<I'm a High School Boy and a Bestselling Light Novel author, and my female classmate who is my junior and a voice actress is returning to her hometown, so I decided to head for a space odyssey. It's fine, I'll launch from Tanegashima --Time to Rocket-- >>

The protagonist was able to identify Nitadori, and knew of the truth she was hiding. She is the queen of the planet—the Second planet of the Arash galaxy Bennu Solar System, Sloatta. Once she regained her memories by changing the color of her left eye, she wanted to eat some horse sashimi from her native planet for breakfast, and suddenly returned home. As she returned, the countdown of the bomb to destroy Earth remains activated...

To get her back, the protagonist launched from Tanegashima, and flies towards space. The intense space chapter shall begin!

<<I'm a High School Boy and a Bestselling Light Novel author, and I feel that it doesn't matter. I love you, I can't forget about you. I want to meet you. --Time to Love-- >>

After reuniting with Nitadori, the protagonist realizes the heavy feelings in his heart. He feels restless. In this situation, Nitadori, unable to eat enough horse sashimi, kicked up a fuss, became really big, and wants to swallow the entire world in 2 weeks. While the protagonist remains conflicted between the fate of the world and his first love, his smartphone receives a message from Earth. “The submission deadline has already passed. Are you done with the manuscript?”

The blazing love story shall begin. The 9th volume enters the climax!

With convicted love and belief, the duo return to school. In this universe, nothing shall stop these two—right when the protagonist had such a thought, the homeroom teacher informed him of a startling fact, “I know you're busy saving the world out there, but you have insufficient attendance. You shall be expelled.”

But to continue being a 'high school boy', what shall the protagonist do? Also, what would be the truth to whatever Nitadori would launch in quick successions. Now comes the finale where the duo shall be tested!

The aforementioned titles shall forever remain unreleased. Please do not inquire the bookstores or the editorial branch. 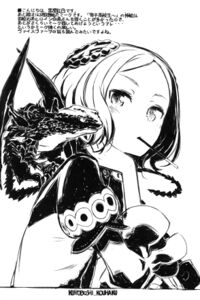 All three afterwords include Meek. In the 'Strangled' series, most of the illustrations involve the strangling heroine Nitadori, so I thought I should include some Meek in the afterwords...

I might as well say that it's enjoyable to draw Meek.

I want to read 'Vice Versa' too.