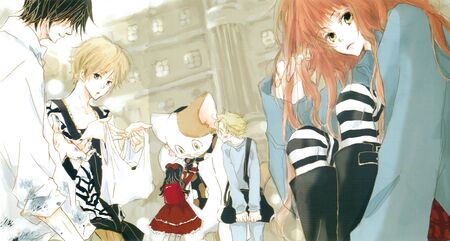 ...is a light novel series written by Kabei Yukako, the author of the Kieli series and illustrated by Techno Samata. This Dengeki Bunko series is complete with 6 volumes.

"Hotel Williams Child Bird", nicknamed <Birdcage Manor>, inhabiting it are eccentric people who can't fit in the normal society. A day-dreaming beautiful woman, a Gothic Lolita that's a grade schooler, a person in a cat's costume, the eerie aged twins and an unidentifiable piercing cry that continues to resound.

In such <Birdcage Manor> one of the residents – Kizuna Etoh, in her 16th winter makes acquaintance with an Art collage student living on the fifth floor like a hikikomori – Yusei Asai. And then she is invited to a part-time job as a nude model for paintings. In an disorderly atelier with a heavy scent of oil paints as she spends time together with Asai, she feels that to her that time is gradually becoming a valuable part of her everyday…

It's a story how <Birdcage Manor's> a bit odd residents' pass - a bit odd, but in various ways - their normal everyday.

This is a hosted project. The chapters will be added here by the translating group after 24 hours after publishing it on the translator's (Heart Crusade Scans) website.