Approximately three hours prior to the arrival of the Naglfar—

In the center of the southern Atlantic, the unknown territory with a diameter of 300 kilometers, having swallowed a portion of the South American continent, was covered by thick mist.

Two girls were looking down at the scene from the air.

"It is impossible to see inside at all..."

Having arrived with the fake Shinomiya Miyako at the final unknown territory I—Mononobe Mitsuki—murmured as I looked at the mist blocking our path.

Calculating from the fact that its range was large enough to cover the unknown territory completely, the mist had probably surpassed a diameter of 400 kilometers. No matter how hard I focused my gaze, I still could not identify the black dome that was supposed to lie under that thick mist.

"You're right. It's too dangerous. Let's not enter, okay?"

Miyako-san asked me in jest.

"No, I have no intention of stopping at this point. I will only go forward. The question is you."

With slight anxiety, I voiced my doubt to Miyako-san who had cocked her head in puzzlement.

"After this mist is eliminated, I will be able to make contact with the final unknown territory... When that happens, will you still remain on my side?"

Facing the dome of mist, I glanced sideways at Miyako-san who was hovering beside me.

"Of course. Didn't I say I was going to help you, Mitsuki?"

She nodded without hesitation, the iridescent halo glowing over her head. This was the power of "Heavy Tremor" Nova—presumably an ability to interfere with gravity.

"But that only applies while our interests are aligned, right? Although I doubt you would answer honestly... Let me still pose the question. At which point in time will we no longer be on the same side?"

During the moment of becoming enemies, or the instant just before that, the side that made the first move would obtain victory. Hence, that point in time would be the most crucial question between us.

"Hmm... How should I put it...? Probably at the very last moment. Until you seal the unknown territory ahead of us into your own body—It would be a problem for me if you committed suicide while carrying the end matter."

Miyako-san answered with levity in her voice. Realizing she had seen through my intentions, my body tensed up violently.

"Then you will kill me before I commit suicide?"

I spoke with a heavy voice. Although the end result was death either way, the end matter would not be destroyed unless Code Lost was used. However, for some reason, she gave a look of incomprehension then suddenly laughed out loud.

"Ahaha&dash;Why do I have to kill you, Mitsuki? Clearly, all I want is to stop you from dying, which is why I plan on stopping you from committing suicide."

"Uh... Meaning that you will not be troubled by the destruction of end matter?"

Confused, I asked again. It felt like we were speaking past each other. Miyako-san practically sounded like she was here to help me.

"Hmm, of course that would trouble me... But you're the most important, Mitsuki. So after sealing the final unknown territory, gather everything together and hand it over to me. No—ultimately, it's still a question whether you can contain all that end matter, Mitsuki. If possible, you should hand it over now. With that, I can take care of all kinds of problems on your behalf. At this point in time, Mitsuki, you still have several options." 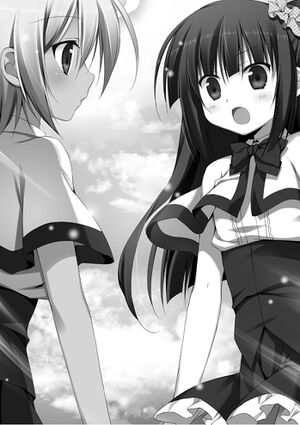 Miyako extended her arms towards me and smiled gently. Unable to see any dishonesty in her smile, I felt my heart wavering, but after warning myself, I glared at her.

"Who would believe that! Although I have no idea what you are planning, I will fulfill my objective at all costs."

After I declared assertively, Miyako-san lowered her hands with a slightly sad look.

"...Indeed, well, it can't be helped right now. However, I will definitely convince you, Mitsuki, whatever it takes."

"I will destroy you first if you try anything weird."

Feeling a sense of crisis, I raised my left hand and warned.

However, I was feeling worried inside, wondering if Neun's authority would be effective against her. Suppose she was not merely a shadow generated from end matter, but also the physical manifestation of Nova the "true dragon," there was no guarantee that Neun's light alone could seal her.

"I think that would be ill advised, you know? Without my help, this mist—'True Obliteration' Ragnarok is probably impossible for you to breach."

Miyako-san answered with a confident expression without showing any signs of fear.

I could not tell if it was because the truth matched my speculations or the reason she had given.

However, no matter what, I must listen to her suggestion.

Because several hours ago, when I sealed the unknown territory in North Africa, I could not even approach without her neutralizing the gravitational field. It was likely she might not be bluffing this time either.

"...Understood. Anyway, I shall reconsider after looking into the mist."

When I lowered my hand, Miyako-san took my hand and pulled me.

"Okay—Then let's hurry and charge in. Mitsuki, do not separate from me under any circumstance."

Holding hands, we charged into the pure white wall of mist.

I broke out in goosebumps from the icy mist touching my skin. Breathing in cold wind, I shivered uncontrollably.

I could not see anything. It was like being inside a cloud.

I wondered whether the view would persist until I reached the unknown territory, but the scenery broadened after that.

Apparently, only the surface layer of the mist was especially thick.

Inside, the mist was of variable consistency. In directions of relatively thin mist, I could even see a gold color in the distance. But precisely because of that—because I could see—I gasped in surprise.

I murmured with disbelief.

Glimpses of streets were visible in the mist. There were many damaged buildings. Their designs were quite strange, never had I seen the likes of before, but this was definitely a city.

Furthermore, there were large creatures, unlikely to be birds, flying in the air over town. Upon closer examination, there seemed to be something moving in the streets too.

While I was puzzled by the unclear situation. One of the flying entities in the sky flew over.

Once it had approached, I was struck by its immenseness.

With the head of a bird and the body of a lion, massive wings on its back—This reminded me of the monster known as the griffin, which had appeared in the video games my brother used to play.

Letting go of Miyako-san's hand, I readied my fictional armament of a bow.

I fired countless forking arrows of wind at the approaching monster.

However, instead of being struck by the invisible arrows, the monster continued to move in our direction without any change.

At this time, I noticed. The griffin-like monster was a bit transparent.

—Incorporeal? Could it be that the attacks passed through—

Grabbing my hand while I was stunned, Miyako-san flew towards the ground.

The monster flew past over my head, the strong wind in its wake blowing my hair to disarray. Despite its transparency, it did not seem to be an illusion.

Miayko-san motioned with her eyes at the wrecked city below.

"Yes, which is why you'd better assume normal attacks are useless. But don't worry, my power interferes with space itself—"

Saying that, Miyako-san circled to the back. Failing to catch its prey, the griffin flew in a circle to chase after us.

Miyako-san extended her hand towards the griffin. Next, a gigantic iridescent halo appeared. The instant this rippling object spread throughout space, the griffin was suddenly sent flying.

While Miyako-san was showing to me what seemed to be a smile intended to inspire me with courage, she descended, rushing towards a round building whose roof was partially broken.

Receiving assistance and encouragement from an inevitable enemy, what on earth was I doing? I was following her pace the whole time, was I not?

Unless I seized initiative, everything would go as she wanted.

Feeling a strong sense of crisis, I tightly reciprocated the grip of Miyako's warm hand.