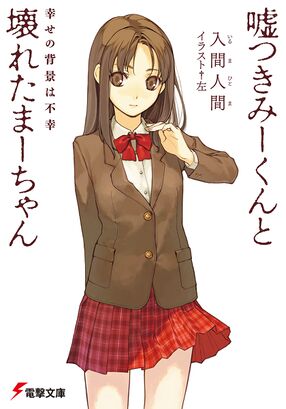 Usotsuki Mii-kun to Kowareta Maa-chan (嘘つきみーくんと壊れたまーちゃん) is a Japanese light novel series written by Hitoma Iruma (人間入間), with illustrations by Hidari (左), published by ASCII Media Works under their Dengeki Bunko label. The series took the 7th spot in "This Light Novel is Amazing 2010".

The Usotsuki Mii-kun to Kowareta Maa-chan series is also available in the following languages:

The setting is a rural city in which a kidnapping and a series of murders are happening simultaneously, where there was also a kidnapping 8 years ago. The victims, the compulsive liar "Mii-kun" (the narrator), and "Maa-chan"

(Misono Mayu) reunite and start living together, despite of the fact that the kidnapped children were in Mayu's apartment...