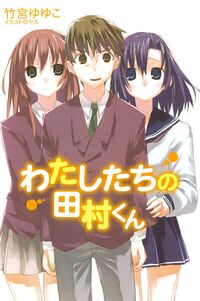 It is a two-volume light novel series originally published on June 10, 2005. A manga adaptation by Sachi Kurafuji was serialized in Dengeki Comic Gao! between May 2006 and February 2008. A radio drama was also produced based on the series, and a two-disc compilation of the drama was released on April 30, 2007.

Watashitachi no Tamura-kun's main story revolves around the title character Yukisada Tamura, who is in his third year of junior-high school when the story begins. Yukisada has become captivated by a strange girl named Komaki Matsuzawa who says that her birthplace was on another planet and she is trying to go back. One day, Yukisada confesses his affections to Komaki, but immediately following this, Komaki's grandmother dies and she has to move away. They both manage to keep in contact for a while by writing letters, though Komaki stops writing around the time of the high school entrance exams. When Yukisada enters high school, he becomes concerned with one of his female classmates named Hiroka Sōma.In junior-high, Hiroka was constantly bullied, which would cause her to stay home, eventually causing her to become isolated and helpless. Yukisada chooses not to ignore her like most of his other classmates, and instead starts encouraging her and helps her to build her self-esteem. Before long, Hiroka falls for Yukisada, and one day confesses her love to him. During this time, Yukisada has kept in contact with Komaki and has mentioned Hiroka in his letters. Thereupon, one day after a long time, a letter arrives from Komaki to Yukisada asking who exactly is Hiroka. (synopsis from MAL)

The Watashi Tachi no Tamura-kun novels , by Yuyuko Takemiya

If you enjoyed the chapter, why don't you tell us in the Feedback Thread

Side Stories that were not collected in the books:

If you enjoyed the chapter, why don't you tell us in the Feedback Thread